The Milwaukee Bucks are set to start the 2021-20211 regular season against the Brooklyn Nets. For the first time in 50 years, the Bucks enter the season as the league’s defending champions. Last season, many pundits and fans had picked the Nets and their Big Three of James Harden, Kevin Durant, and Kyrie Irving to win the title. Again this season, too, the Bucks are not favored by many to repeat. In fact, many believe the Nets, even without Irving, will win the East this season. That is alright with the Bucks, who prefer to be the underdogs. After all, they were underdogs when they faced and defeated the Nets last season. As the season tips off tonight, we take a look at three keys to victory to defeat the Nets once again.

The Milwaukee Bucks will start the regular season without the services of Bobby Portis and Semi Ojeleye.

As expected, the Bucks list Rodney Hood (foot), Bobby Portis (hamstring), Semi Ojeleye (calf) and Donte DiVincenzo (ankle) out for opening night against Brooklyn, while Kyrie Irving (not with team) is out for the Nets.

Sandro Mamukelashvili is the back up big for Milwaukee.

This means that the primary backup front court players for Milwaukee will be rookie Sandro Mamukelashvili (Mamu) and Thanasis Antetokounmpo. The Brooklyn Nets boast a front court of Kevin Durant, Blake Griffin, LaMarcus Aldridge, and Paul Millsap. While three quarters of these players have seen better days, the fact is that they are veteran NBA players on a championship caliber team. If Giannis Antetokounmpo and/or Brook Lopez get into foul trouble, any of these four could find themselves matched up favorably against Thanasis or Mamu. It will be up to the young rookie and energetic Thanasis to step up off the bench in larger roles than they might usually play.

Yesterday, it was announced that the Milwaukee Bucks had offered Grayson Allen a two-year $20 million contract extension. Allen, of course, was acquired by the Bucks for Sam Merrill during the offseason. Merrill will likely be in the starting lineup today, replacing Donte DiVincenzo who is still recovering from foot surgery.

Donte is not known for his offensive prowess, but is a phenomenal defender. Allen, on the other hand, is not known for his defense. In fact, it has been listed as a weakness in game by scouts for years. Additionally, Allen has been known to force shots on offense when he does not need to. Hopefully he has cleaned this up in his work with the Bucks this offseason. He has, however, been showing great chemistry with Giannis in the preseason that have led to plays like this:

Grayson Allen over the top.

The @Bucks bench LOVES it!

A Battle of MVP’s 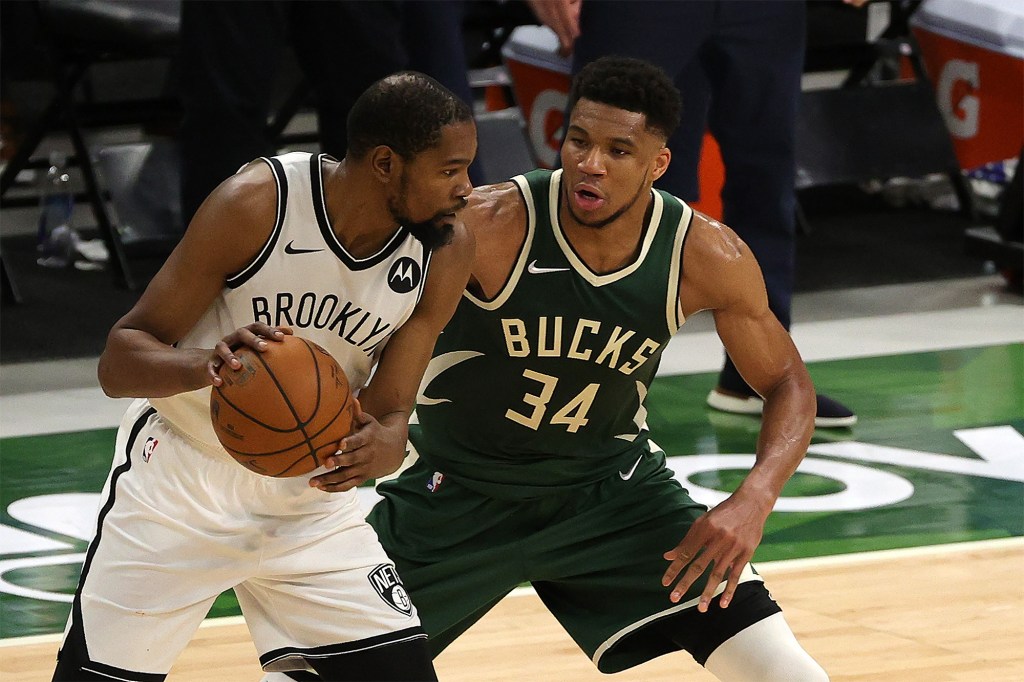 As in any matchup between the Bucks and Nets, the final score could very well come down to the battle between Giannis Antetokounmpo and Kevin Durant. Oftentimes, Giannis has been the only player able to keep up with Durant on defense, though Khris Middleton is often tasked with guarding the four-time scoring title champ.

Recently, Giannis has been showing off an improved jump shot in the preseason. If this shot is the real deal, it could be very dangerous for the rest of the league. Perhaps the only player who could compete with his complete bag of weapons would be Durant. On thing is for sure, though: whichever of these guys has the better game could very well be on the winning side of the contest.