Excitement was in the air for Wisconsin to kickoff their season. With a huge first test against Penn State, the Badgers simply crumbled. Wisconsin falls to the Nittany Lions 16-10.

Wisconsin starts the season 0-1 for the first time since 2015 where the loss to Alabama 35-17. The Badgers will face off against the Eastern Michigan Eagles next Saturday at Camp Randall. Kickoff for the game is at 6:00pm on FS1.

Following the loss, their were a few performances that stood out throughout the game; some good, some bad and some plain out ugly. In this article, I break down those performances and what needs to change for the Badgers moving forward.

Even though he hasn’t been with the team very long, Chez Mellusi seems to have found his stride early for Wisconsin. The junior transfer running back from Clemson looked very comfortable carrying the football, finishing with 31 carries and 121 yards. With just 22 career carries previously, the heavy workload didn’t seem to affect his play. Mellusi also scored Wisconsin’s only touchdown of the day.

One of the things that I loved about Mellusi’s game is his ability to hit the hole. At times he was very effective breaking for multiple double digit runs, including a run for 19 yards. Although Mellusi and quarterback Graham Mertz had a few botched handoffs, the running back was easily one of Wisconsin’s top performers. With over two thirds of Wisconsin’s rushing yards for the game, clearly Mellusi is going to be the Badgers top back moving forward. Coming into the season, high expectations were expected for senior linebacker Jack Sanborn to lead this Badger’s defense. Once again he delivered. The Illinois native finished with five tackles, two for a loss, and one of Wisconsin’s two sacks. Sanborn was by far Wisconsin’s best defensive player against Penn State.

The inside linebacker was able to fly around and created plays all game long. He was able to put pressure on Clifford on numerous plays and something Wisconsin needs moving forward. If there was a player that can carry this team forward on the defensive end, it’s the senior Sanborn.

After being out for the majority of the season ago, Danny Davis was one of Wisconsin’s bright spots in passing game. The senior finished with eight catches for 99 of the Badgers 185 passing yards. Along with leading the team in catches and yards, the veteran wide receiver made huge plays down the stretch in game, particularly a diving grab on 3rd and seven late in the game. The catch put Wisconsin at the one yard line and continued a much needed drive.

With Davis out for the majority of the season ago, it really put a void into the passing game. If Davis can become more reliable in the passing game, it could help Mertz progress throughout the season and spread out opposing defenses. Something Wisconsin struggles to do today. 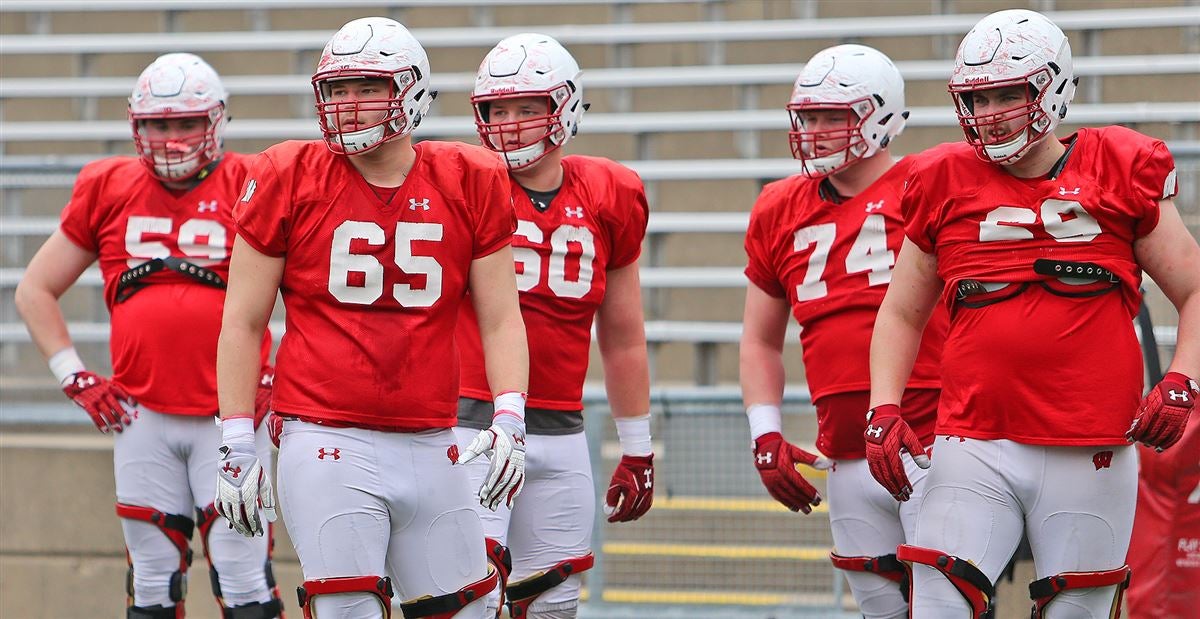 One of Wisconsin’s staples as a program has been and will be the offensive line. Against Penn State though, it was far from their best performance. Early in the game, the line struggled during pass protection and left Mertz in difficult positions. An early adjustment came fairly early for Wisconsin. After two uneventful series, they replaced the left guard, right guard, and center.

#Badgers with a new LG/ C/ RG on this drive. Interesting.

After the switch, the Badgers seemed to have found their rhythm. Wisconsin drove all the way down the field before a blocked field goal whipped out the great drive. Pass protection and the running game picked up and the Badgers were back in business.

To be clear, I do think the offensive line played much better throughout the game as whole. However, the slow start and inconsistency was noticeable. Last season Wisconsin seemed to have the same issues of consistency throughout the season. If the guys upfront can shack off the rust of game one, it can really push the offense forward.

With strong performances from individuals on the defense, the Badgers front seven seemed to struggle again to get after the quarterback. With just two sacks, Penn State Quarterback Sean Clifford made numerous throws with plenty of time. At times, Defensive Coordinator looked like he had the defense humming. With just 44 total yards in the first half, the defense looked ready to play.

In the second half, that completely changed. The Badgers had numerous opportunities to get after Clifford or make plays for loss yardage. Poor tackling and just being a step slower allowed Penn State to open up their passing game and finished the day 297 total yards of offense.

I’m not putting blame on the defense for this loss. They played as good as they could and only allowed 16 points to a promising Nittany Lion offense. But if Wisconsin is going to win games against better teams, they need to find ways to get after the quarterback more often. If they’re able to do so, this could allow the defense to create more turnovers and carry them forward to bigger and better things. 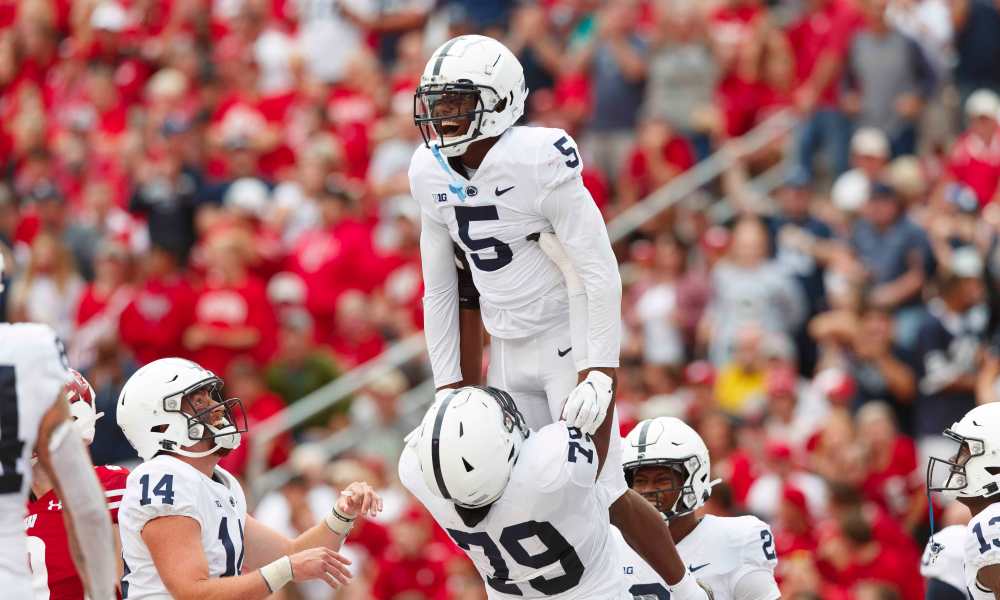 One of the things that Wisconsin did so well in the first half was limit Penn State’s ability to hit big plays. With the weapons the Nittany Lions have, the Badgers did everything they could to negate the big plays down field. In the second half though, everything began to open up.

Penn State’s star receiver Jahan Dotson was the home run hitter and scored the Nittany Lion’s first touchdown on a 49 yard pass from Clifford.  The following series Clifford was able to find Sophomore Keandre Lambert-Smith for 57 yard pass which pushed Penn State into the red zone. On both plays the Badgers Secondary blew coverage and Clifford was able to find both players with ease. Penn State would have two more plays over 30 yards, a 34 yard run by Noah Cain and a 42 yard pass to Dotson once again.

Although it’s difficult to match up with a player of Dotson’s ability, Wisconsin can not afford to give up large plays on defense. Again, it’s the first game of the season. I expect the Badgers to clean this up moving forward. But if this trend continues, the Badgers are going to have a hard time staying in games. 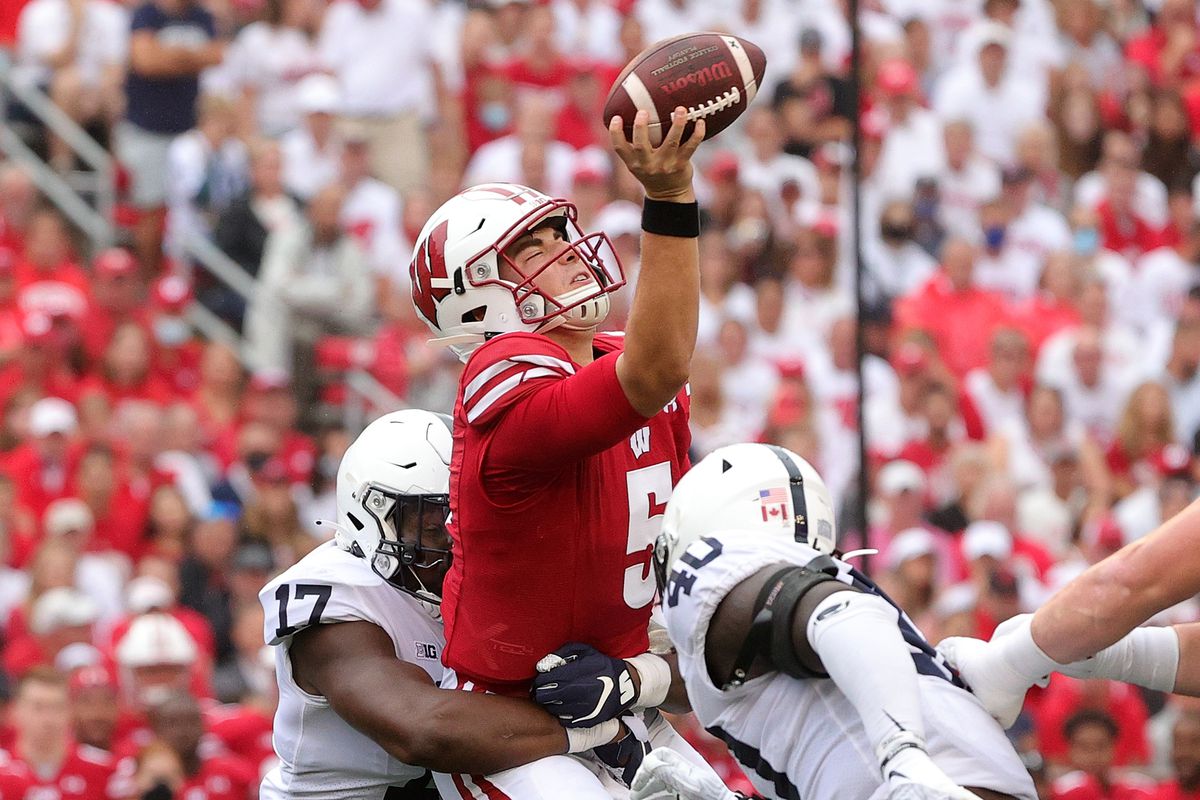 Well friends, this one seems like the obvious one. To put it simple, Graham Mertz was not good enough against Penn State. To go from the hot start a season ago to where he finished, this looks a lot like last year second half performance.

First, Mertz struggled once again to protect the football. From botched hand offs to interceptions late in the game, the Sophomore QB was unable to protect the football. At times, the heavy pressure really flustered the Wisconsin quarterback and really forced him into tough spots. Although all the blame isn’t on him, he simply can’t turn the ball over and put Wisconsin in difficult positions throughout the game.

Second, he struggled to make key throws. The most noticeable was a play to wide receiver Chimere Dike in the fourth quarter. With the game on the line and down six, Mertz put together a good drive to give Wisconsin a chance for the win. On first and ten at Penn States 25 yard line, Dike was streaking down the middle with space. Mertz stepped up and over threw the freshman wide receiver. Two plays later, Mertz threw his second pick and to close out Penn State’s win. Although Wisconsin didn’t lose the game on that play, it was one that Mertz needed to make and could’ve won them the game.

Lastly, Graham Mertz needs to find his rhythm on offense. If Wisconsin is going to win games this season, they can’t afford to continue this poor trend of play. Along with finding his rhythm, it starts with the basic quarterback mechanics. Footwork, going through progressions and not eyeing down his receivers, all things Mertz struggled to follow. The offense can only go as far as Mertz can carry them and he needs to correct his wrongs.

Although it’s frustrating to see a loss like today, the season is far from over. It’s very easy to get caught up in the bad and ugly of today’s game but their were lots of positive too. The run game seems to be consistent once again, the defense is still a very strong group, and these are mistakes that the Badgers can fix. I wanted this win just like every Badger fan but we have a long season to go. Stay positive Wisconsin fans. Lets hope the Badgers can shake this off and move on to better things this season.