On Monday, Brewers fans were treated to welcome news. Josh Hader was activated from his stint on paternity leave after welcoming his first child.

Hader, who had taken time away earlier in the year to be with his pregnant wife, was able to welcome his first child Lucas this past week. After leaving the Brewers during the series in New York against the Mets and Cincinnatti as well, the Crew has their shut down closer back.

During Hader’s absence, Devin Williams assumed the closer duties and did so just fine. Williams appeared in two games during that span. The righty allowed just 1 hit through two innings of work and recorded one save. With Hader back in the fold, the Brewers bullpen looks to return to its dominant form.

While the welcoming of Josh Hader is good news for the Brewers, the loss of another starting pitcher dampens the mood. Aaron Ashby was added to the 15 day IL to make room for Hader’s return. After leaving early in his last start, Ashby seemed to be progressing towards making his next start against St. Louis. After throwing a bullpen session over the weekend, Ashby’s progress seemed to slow. Ashby’s IL stint will be retroactive to June 17th. 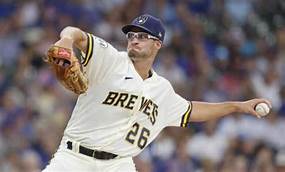 Ashby has had an up and down season so far. The typical bumps that come with your first full season have not eluded Ashby. Through his first 14 games and 55 innings pitched, Ashby has sported a 4.25 ERA. Ashby has been used both as a reliever and starter this year and looks to be a big part of the Brewers success this season. With the injuries to his staffmates, Brandon Woodruff and Freddy Peralta, Ashby’s injury could not have come at a worse time. Whether the move to the IL is mostly cautionary or more cause for concern is still to be known. Counsell and company will be long looking for him to come back and contribute to this staff. One thing for certain, the Brewers are getting tired of the injury bug.