Minnesota came out swinging against the Badgers in what was supposed to be a heavyweight fight between two powerhouse teams and rivals. They were the aggressor throughout the first period and Cameron Rowe did all he could to hold the Badgers within a goal heading into the second period. From there it was all Gophers until a late rally by Wisconsin. They added four more goals in the middle frame and led the Badgers 5-1 going to the third. Wisconsin’s three goal rally in the third period was not quite enough and they ultimately fell to the Gophers 6-4. 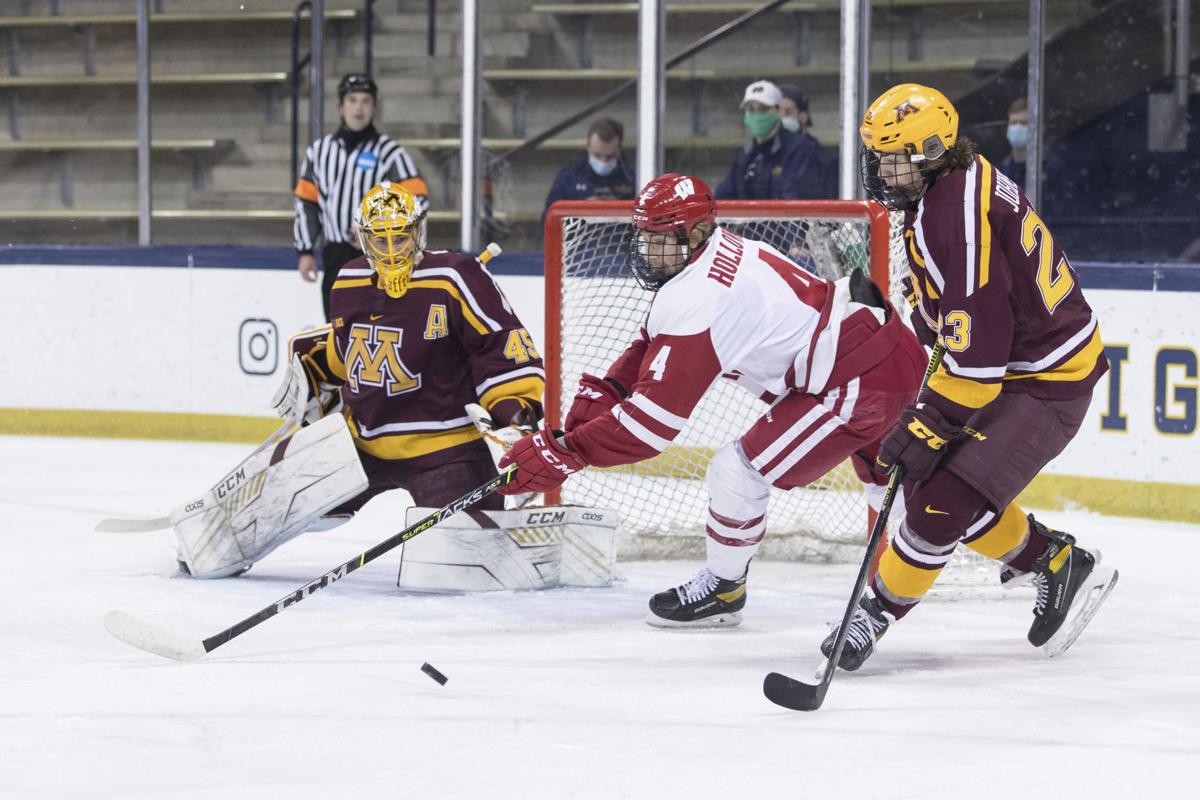 #1 Seed Detrimental to the Badgers?

Both teams were coming off overtime wins yesterday, but this is the Gophers’ third game in three days. The Badgers were supposed to be rested and ready to take the Big Ten Tournament crown for the first time since 2014. When the puck dropped to begin the game it was clear they lacked the urgency that Minnesota displayed. The Gophers spent so much time in their offensive zone it seemed like an endless power play. This strong effort led to numerous scoring chances. They finally broke through seconds after Cole Caufield’s minor penalty for high sticking expired. Blake McLaughlin snuck one past Rowe for the 1-0 lead at the 10:32 mark. The Gophers and Badgers would seemingly trade scoring chances throughout the remainder of the period. Neither team could capitalize on any of these chances and it was 1-0 Gophers at the first break.

Minnesota did not miss a beat as they applied endless pressure in the Wisconsin end to start the second period. This time, it did not take nearly as much time (1:47) to find the back of the net. Mike Koster gave Minnesota a 2-0 lead by going six hole on Rowe. Pesky Blake McLaughlin assisted on this goal after opening the scoring in period one. Wisconsin finally answered with a goal of it’s own when Roman Ahcan was in the right place at the right time. He fired home a puck that was deflected to him by a Gopher defenseman. Just two and a half minutes later, Minnesota regained its two goal lead with a right place right time goal of its own. Sampo Ranta’s shot hit the post and Brandon McManus was there to slam it home. Just like that, 3-1 Minnesota.

And then it got ugly for the Badgers. Scott Reedy and Jaxon Nelson each scored in the final three and a half minutes to give the Gophers a 5-1 lead. This was the end for Cameron Rowe. He allowed four goals on 14 Gopher shots in the second and we all forgot about his solid first period. To be fair to Rowe, he was left hanging by his absent defenseman on numerous occasions. It was a small miracle that this game was 1-0 for more than two minutes.

The Badgers hit the ice in the third period as if they were a new team. The reward came in the way of Mike Vorlicky scoring just his second goal of the season on a nifty wrist shot 4:08 into the third period. Just 1:26 later, Roman Ahcan drew Wisconsin within 5-3 when he slammed home his own rebound off a pass from Linus Weissbach. It was Ahcan’s second of the night and gave the Badgers a little momentum. From there, Gophers goalie Jack Lafontaine stopped everything, including making a tough save with his neck. He faced constant pressure and a barrage of Badgers shots from all angles.

At Last a Caufield Sighting

This fantastic net-minding lasted until 2:11 remained in the game when Cole Caufield finally scored. Owen Lindmark won the face-off to the right of LaFontaine. He quickly fed a pass to Caufield who hammered the puck past Minnesota’s goalie. This cut the deficit to 5-4 and suddenly it seemed like the improbable comeback was a possibility. But it was not to be. With 24 seconds remaining Blake McLaughlin got hold of a skittering puck and tipped it into the empty net to make the final margin 6-4. This was McLaughlin’s second goal of the night to go with his two assists. McLaughlin overshadowed Wisconsin’s Big Ten Player of the Year and likely Hobey Baker Award winner Cole Caufield.

Caufield picked a bad time to have an off night. His penalty led to Minnesota’s first goal and he was largely unmentioned until late in the game. Badgers need him to bounce back if they want to make a run at the NCAA title.

Wisconsin goalie Robbie Beydoun who started last night and replaced Cameron Rowe tonight, played admirably in the third to keep the Gophers from adding to their lead. Beydoun stopped a breakaway with a glove save and made a few other do or die saves to keep the Gophers at bay.

This was the Gophers second Big Ten Tournament championship. They join the Fighting Irish of Notre Dame as the only schools to win multiple tournaments (Notre Dame has won three total).

Looking ahead for both teams, the NCAA Tournament looms at the end of the month. Minnesota has all but locked up a one seed while Wisconsin should be in line for a two, with the worst case being a three seed. Selection Sunday is March 27th. The bracket will be revealed at 7pm EST on ESPNU.

The Badgers and Gophers each had one penalty in the game. They briefly overlapped in the first period and the two teams played 4-on-4 hockey for just over a minute. While neither team scored a power play goal, Minnesota’s first goal came after a sustained push in the Badgers’ end during the power play. The Badgers outshot the Gophers 50-34. This was the 299th meeting in the Badgers and Gophers rivalry. Minnesota leads the series 176-99-24.