Wisconsin quarterback Graham Mertz looks and completes one of his 20 completed passes Friday night. Mertz only threw one incompletion and threw four of his five touchdowns in the first half in Wisconsin's opening victory over Illinois, Uwgrid24 18
Share
Facebook Twitter LinkedIn Pinterest Email

With the Badgers set to face-off against Notre Dame, the performance by Graham Mertz could defy his career. The 12th ranked Irish are one of the most complete teams in football. With former Wisconsin quarterback Jack Coan at the helm, it may be Brian Kelly’s most talented team at Notre Dame ever. Although they haven’t been perfect, the Irish have found ways to get it done when needed.

That being said, it’s not about how the Irish offense performs on Saturday that will decide the game. It’s about how Wisconsin can get after a tough Notre Dame defense. With two games in, it’s still hard to see how good this Badger offense can be.

We know that the run game has been stellar. Averaging 266 yards a game, Wisconsin ranks in the top 10 currently in rushing yards. We also know that the Badger defense is what keeps this team together, holding teams to just 11.5 points per game. But where does Wisconsin stand in the passing game led by Graham Mertz?

Here’s a breakdown of where the young QB stands in his Wisconsin career. 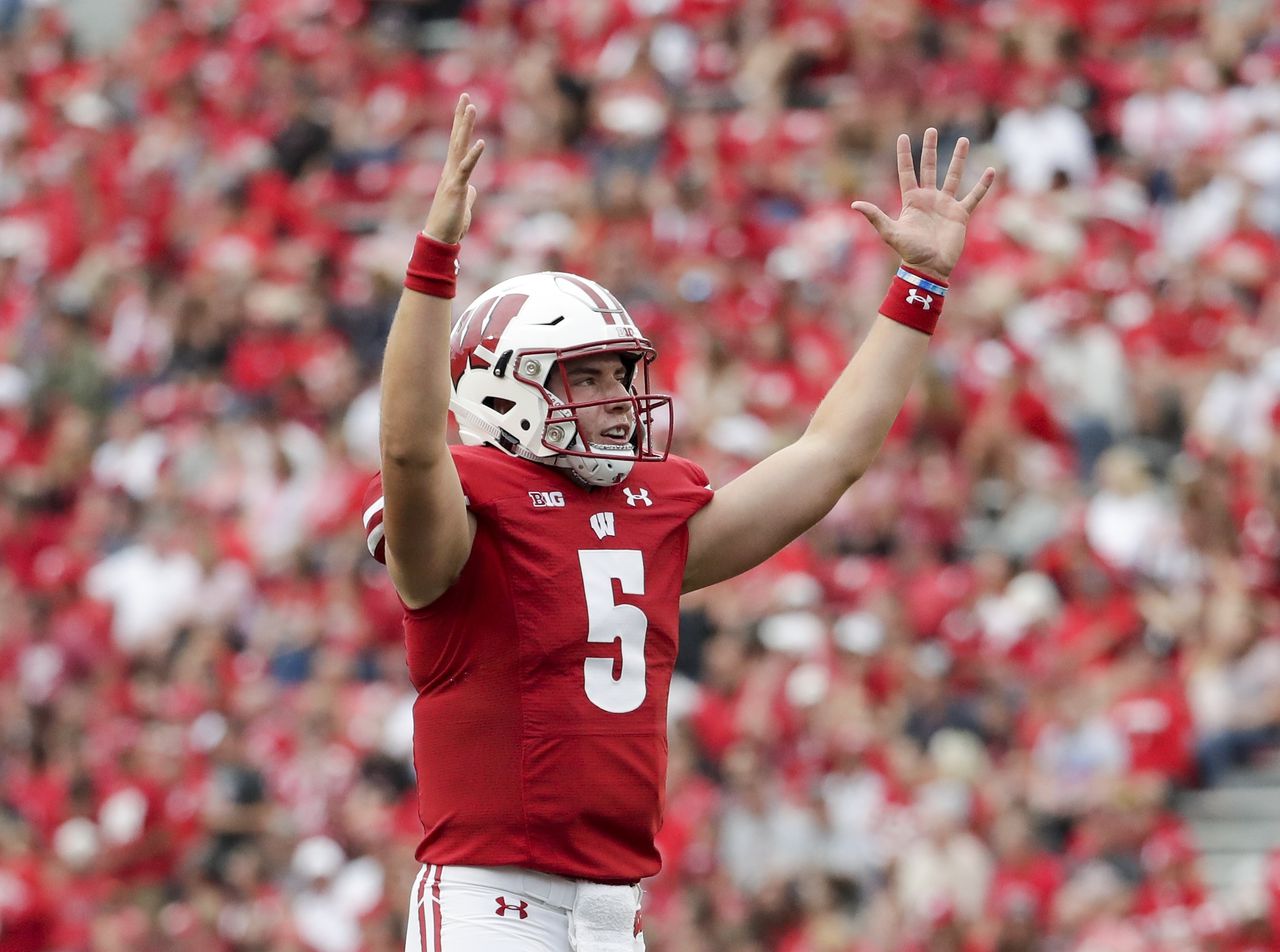 Against Eastern Michigan, Mertz looked a lot like the quarterback he was supposed to be coming out of high school. The Overland Park native finished 14 of 17 with 141 yards and completion percentage at 82.4%. This was Mertz’s second highest completion percentage since the opener against Illinois in 2020 where he finished at 95.2%.

What stood out most about the performance was his ability to set his feet and complete the throws as needed. Even though he didn’t throw a touchdown, he finished the game like he was supposed to. Controlling the passing game to open big runs behind the running backs. Along with that, he also didn’t turnover the ball like he did against Penn State the week prior. With just one bad exchange, Mertz held the offense together and had a solid performance. 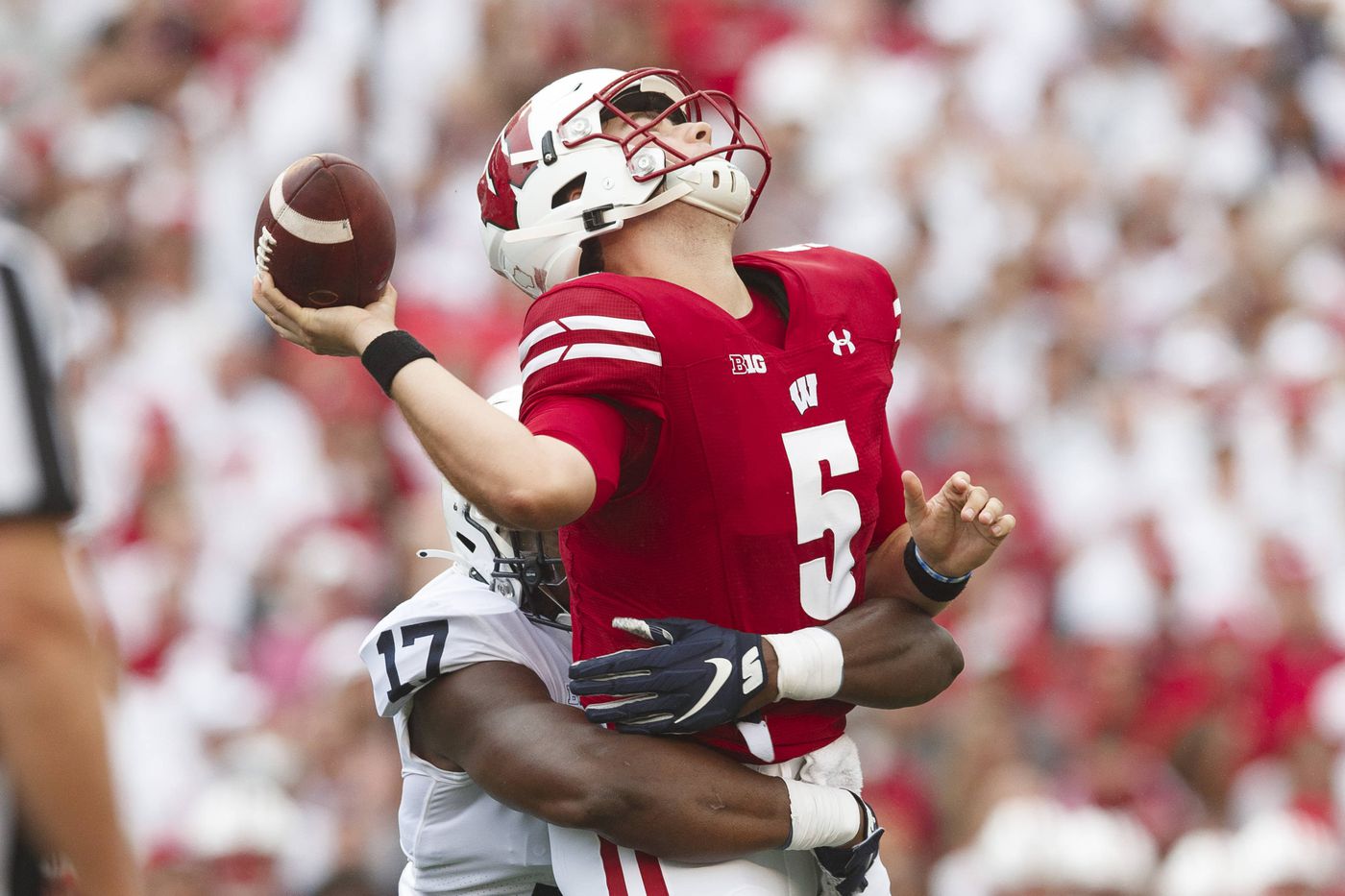 Like most fans know, Mertz has had an up and down stretch against Big Ten opponents. Against non top 25 conference teams, Mertz is 3-0 averaging 212 yards passing and with a completion percentage at 68.7%. Along with the solid completion percentage and passing yards, Mertz had seven touchdowns with zero interceptions. It’s pretty clear that when Wisconsin has played non ranked Big Ten opponents, Mertz has been able to produce.

However, in the big games, the sophomore quarterback has struggled mightily. Against top 25 teams in conference play, including this season, Mertz has an 0-4 record averaging 196.5 yards per game and a completion percentage of 56.6%. To make matters worse, he has just one passing touchdown and seven interceptions.

Looking at it, it’s pretty glaring the struggles that he has had against ranked Big Ten opponents. In those games, the fundamentals at the QB position completely change. He struggles to hit the open receiver, eyes down his target, and struggles to set his feet. It also didn’t help that he went against strong defenses a season ago in Iowa, Northwestern, and Indiana, including a tough Penn State team this season. In those four conference losses, the Badgers were held to just 7.5 points a game. 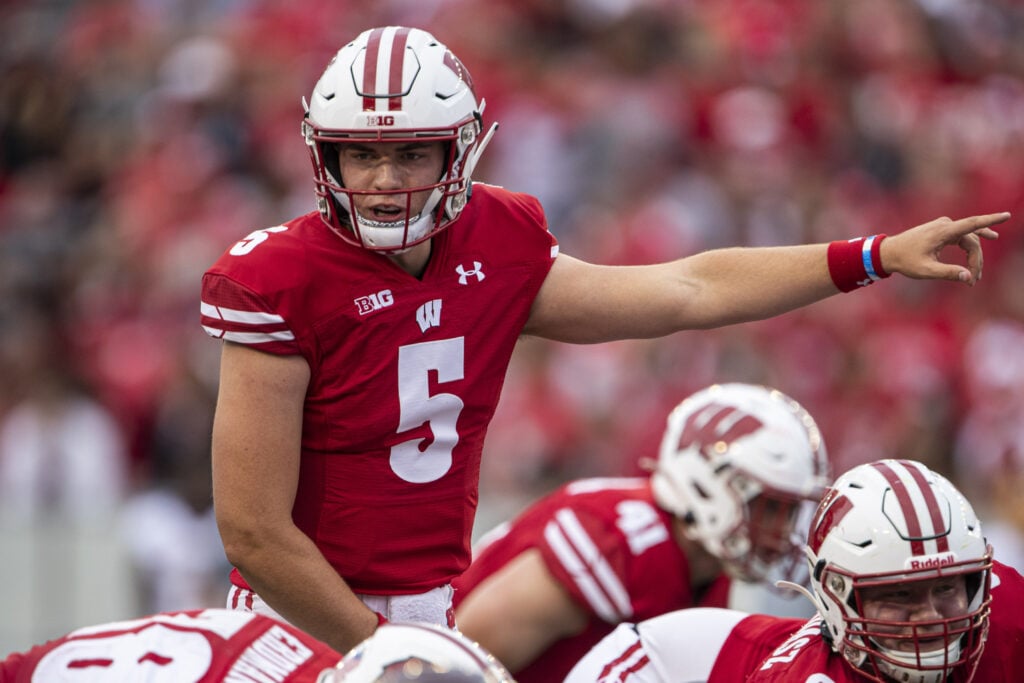 Although fans are frustrated with his play, I can’t imagine Mertz is happy with his performances either. After a loss to Penn State, he spoke clearly that he needs to be better and almost as though the loss humbled him. “I know I can play a lot better football,” Mertz said. “I’ve got to learn from it. I’ve got to learn and grow.”

If there was ever a game to change the narrative surrounding him, Notre Dame is just about as big as it gets. With already one loss on the season, it would be hard for Wisconsin to make a case into the CFP with two. Along with that, Mertz hasn’t found that big win in his career. I would think against his former quarterback room buddy Jack Coan and the 12th ranked Irish could be just that.

Yes, the defense still needs to stop that talented offense and cause some pressure. Also the running game still needs to be a solid contributor throughout the game, including the offensive line continuing to get better as group. But now is the time for Mertz to emerge. Doing so Saturday morning on primetime TV could just be what defines Graham Mertz as a Badger moving forward throughout his career.