After the Milwaukee Bucks defeated the Philadelphia 76ers on Tuesday night, they took sole possession of the second seed in the East. As the final weeks of the season are upon us, many fans are looking towards the playoffs and potential matchups. The Bucks may be in second now, but they could realistically finish anywhere from first to fourth. This makes it difficult to know for certain who their first round playoff opponent will be. As such, I have decided to rank each of their potential first round matchups. This excludes Miami, Boston, and Philadelphia, at least for now. The teams Milwaukee could face are going to be ranked by how well they match up against the Bucks. In other words, the team that would give the Bucks the toughest competition will be the highest ranked. A Note on Play-In Games

The NBA has instituted a play-in tournament in increase the incentive for teams to try to win at the end of the regular season. No longer will the top eight teams from each conference be guaranteed a playoff spot. Instead, the seventh and eighth seeds will play a single game, with the winner taking the seventh seed. The loser will play the winner of a game between the ninth and tenth seeded teams. The winner of that particular game will be the eighth seed. 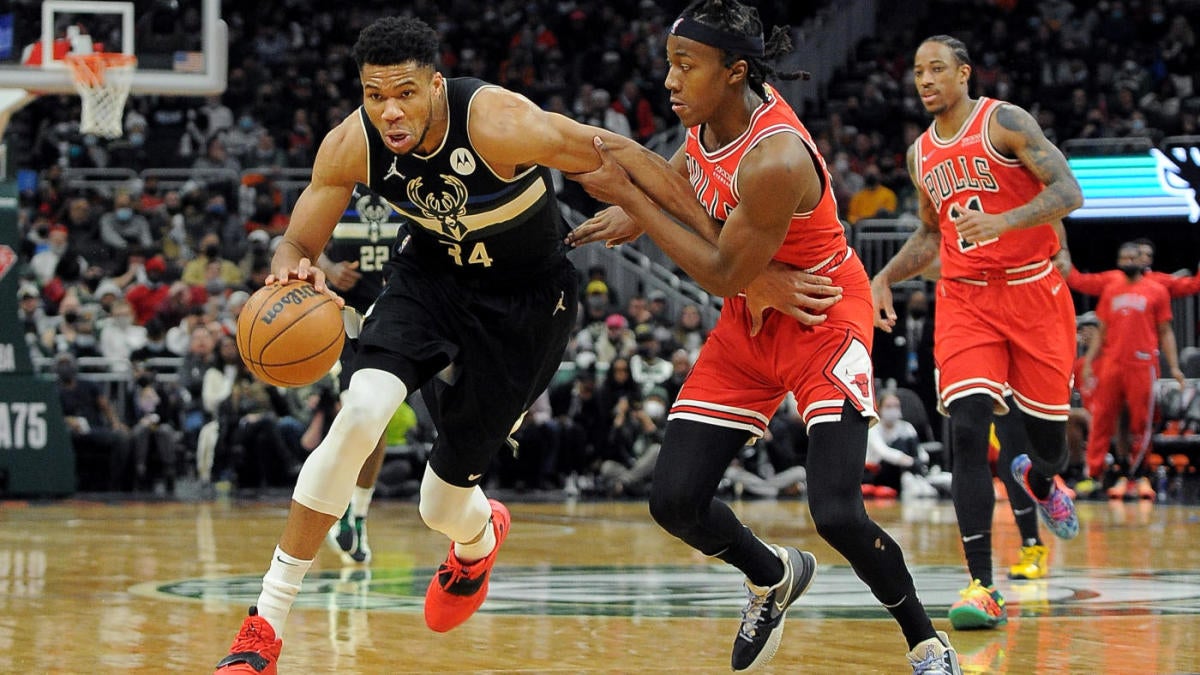 This may seem odd, but the Bucks’ highest ranked potential opponent in the standings may also be their easiest matchup. The Chicago Bulls were, at one point, the number one seed in the East. However, they have fallen off the rails and now sit at the fifth seed. Part of the reason for this is that they cannot compete with the top teams in their conference. In fact, they are 2-18 against the top four teams in either conference.

While the Bucks finishing fourth in East may mean that they lost some games down the stretch, it would guarantee them a matchup with their easiest first round opponent. So far, Milwaukee has won each of their three games against the Bulls this season. They play in Chicago on April 5 for the last time in the regular season.

One final thought: since January 28, 2018, the Bucks have won 15 of their last 16 games against the Bulls. Their lone loss came in May of last year when the Bulls won 118-112. The Bucks starting lineup that night was Mamadi Diakite, Jeff Teague, Sam Merrill, Pat Connaughton, and Thanasis Antetokounmpo. Jordan Nwora, Justin Jackson, and Elijah Bryant were the only other Bucks players to score in that game. 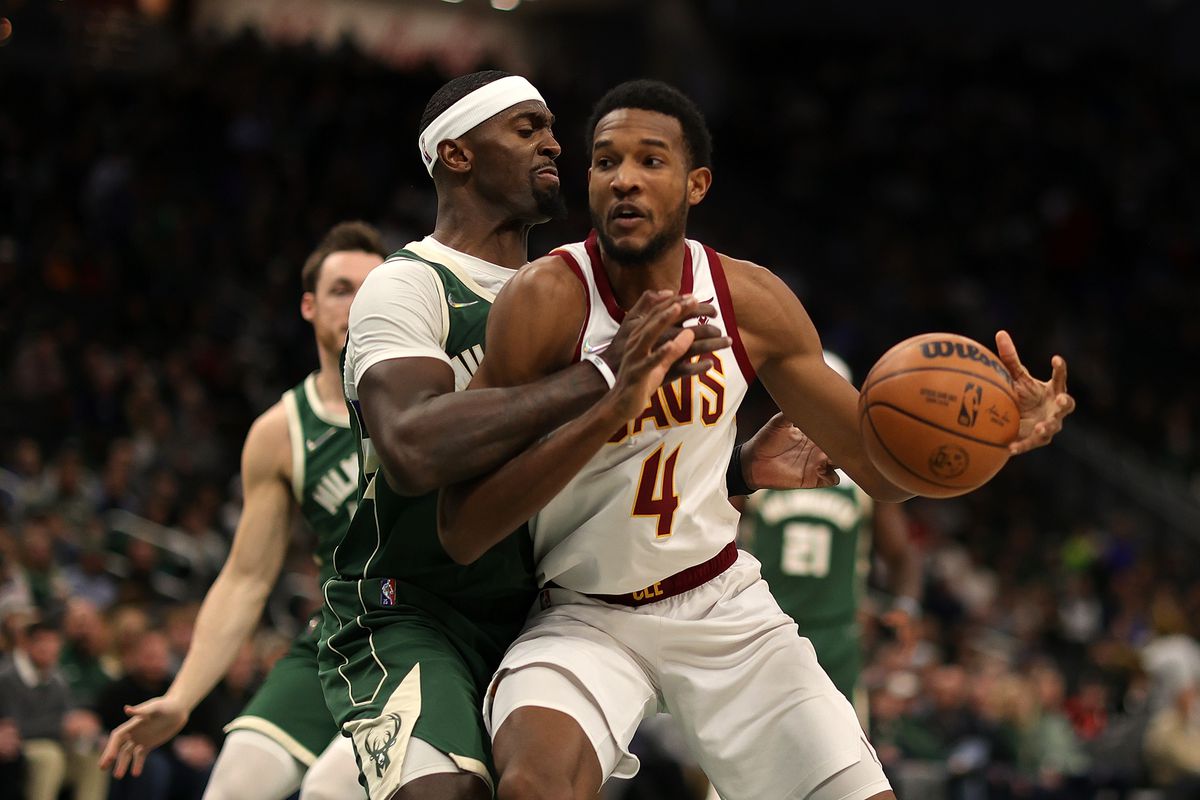 This may be surprising, having another one of the top seven teams as opposed to the two play-in teams here. It also may be surprising given the fact that Bucks are just 1-2 against Cleveland this year. However, it is important to look at more than just the record when determining how tough of a matchup they would be.

The Bucks lost their first matchup against the Cavs 115-99. It was a poor showing by Milwaukee, but both Kevin Love and Cedi Osman of the Cavs scored over 20 points off the bench. In the second matchup, Milwaukee lost 119-90. Their starting lineup? Jordan Nwora, Sandro Mamukelashvili, Javante Smart, DeMarcus Cousins, and George Hill. Thanasis Antetokounmpo, Pat Connaughton, and Semi Ojeleye were the only other players who scored.

On December 16, 2021, the Bucks defeated the Cavs 112-104. Giannis, Holiday, and Middleton each scored over 20 points. With the Bucks team as it now, with players solidly in their roles, it is hard to imagine a series with the Cavs going longer than five games with the Bucks winning easily. 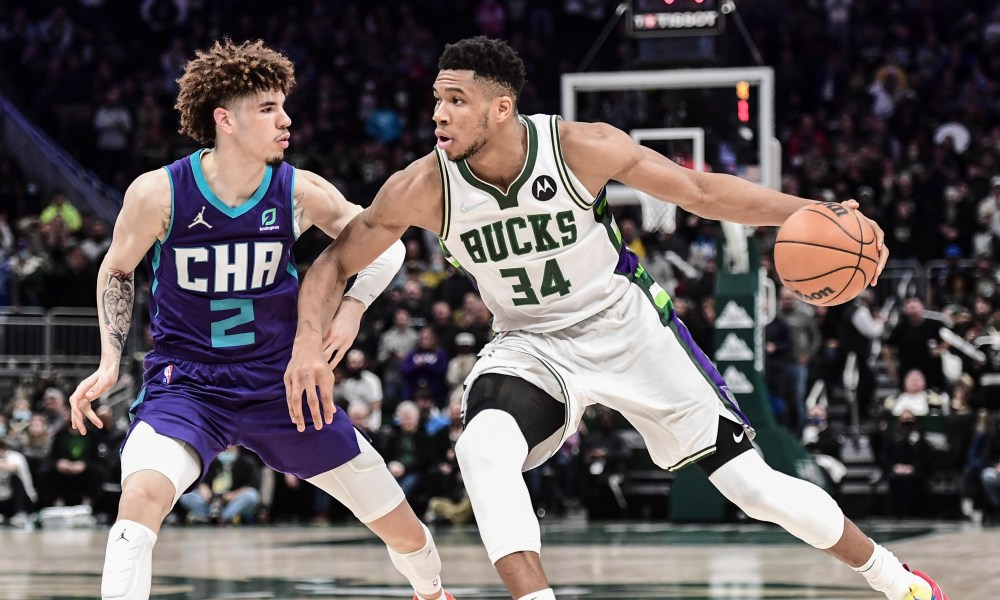 Do not let the box scores fool you. The Charlotte Hornets may be 2-2 against the Milwaukee Bucks this season, but the scores of those games just tell part of the story. In the Bucks two losses, Jrue Holiday was not playing. Milwaukee is 4-10 without Holiday on the floor. Clearly, he is a difference maker.

In the Bucks’ win over the Hornets on December 1, Holiday had 11 points, four rebounds, and seven assists. He was even more effective on the defensive end, logging two steals and a block. In the second game against the Hornets in which Holiday played, on February 28, he had 21 points, eight assists, and six rebounds. He also had a +/- of +30.

Of course, Charlotte, as of right now, needs to win the two play-in games and the Bucks need to finish as the one seed in order for the two teams to meet. Milwaukee is 3-3 in their last six against the Hornets, but playoff experience and better overall talent from the Bucks would make it a quick series.

This particular matchup would be a rematch of last season’s Eastern Conference Finals. Indeed, the Hawks have playoff experience and a chip on their shoulder when it comes to the Bucks. These reasons are why they are ranked so highly on this list despite being a play-in team. Additionally, the Bucks are just 1-2 against the Hawks this season.

However, as with other teams on this list, it is important to look at who was NOT playing in the games which the Bucks lost. Milwaukee lost the first matchup of this season 120-100 and Jrue Holiday was out. As mentioned previously, the Bucks are just 4-10 when Holiday misses games. In the second game, a 121-114 loss, Khris Middleton was out. The most recent game, though, was a 124-115 win and each of the Big Three was available. Giannis had 43 points, 12 rebounds, and five assists. Middleton had 23 points, eight rebounds, and three assists. Holiday had 11 points, eight assists, and five rebounds. Bobby Portis, then the starting center, had 23 points and 15 rebounds.

Clearly, the Bucks are the better team when they are fully healthy. With Brook Lopez back, they are even deeper and better at defending in the paint. Trae Young, of course, can lead the Hawks to a few wins on his own, but the Bucks are a much better team. 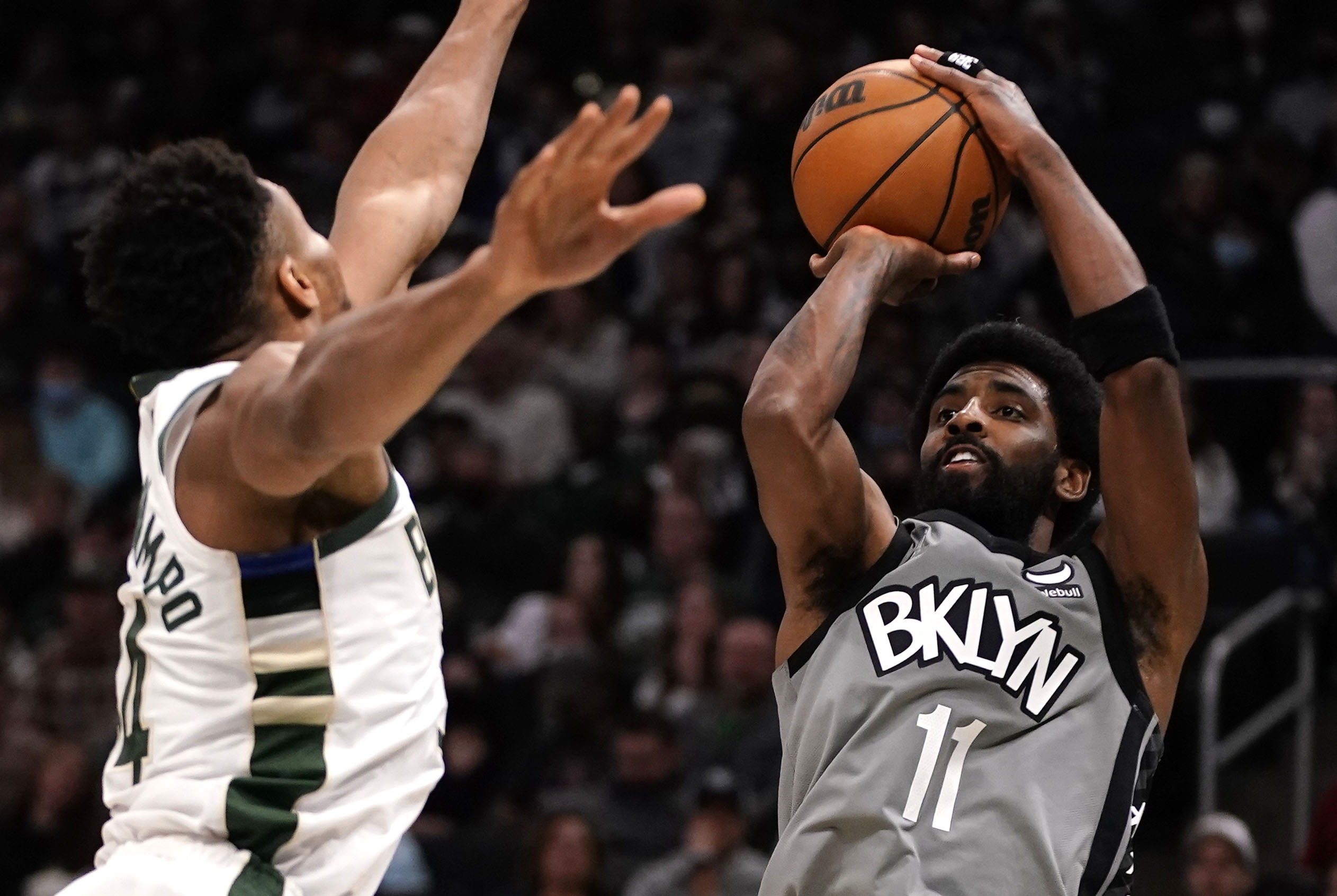 Not having the Nets as the number one team in the East that could give the Bucks a hard time may come at a surprise. However, I’ll address why Toronto is the worse matchup later. Regardless, Brooklyn is surly a force and many end up being the best lower seed in NBA history. A lot of this has to do with Kyrie Irving being able to play at home without the vaccine mandate. Even if Brooklyn ends up in the play-in tournament, having Kyrie alongside Kevin Durant will give them quite the advantage. As is the case with the Hawks, the Nets, too, have a playoff grudge with the Bucks, who beat Brooklyn in seven games in the Conference Semi-Finals last season.

This season, the Bucks are 2-1 against the Nets. Kyrie Irving has played in one of those games, the one game which the Nets won. Kevin Durant played in both games in which the Bucks emerged victorious. The only game in which Milwaukee lost was a 126-123 nail-biter that Milwaukee could have and should have won. The Bucks had a better field goal percentage, three point percentage, and more rebounds. However, they only made 65% of their free throws while Brooklyn made 75%.

The Bucks, of course, won a very close series last postseason. Both teams have had major roster turnover since then, but the Bucks have emerged as the better team with the better record. That being said, a seven-game series against Durant and Irving is not an easy series to win. 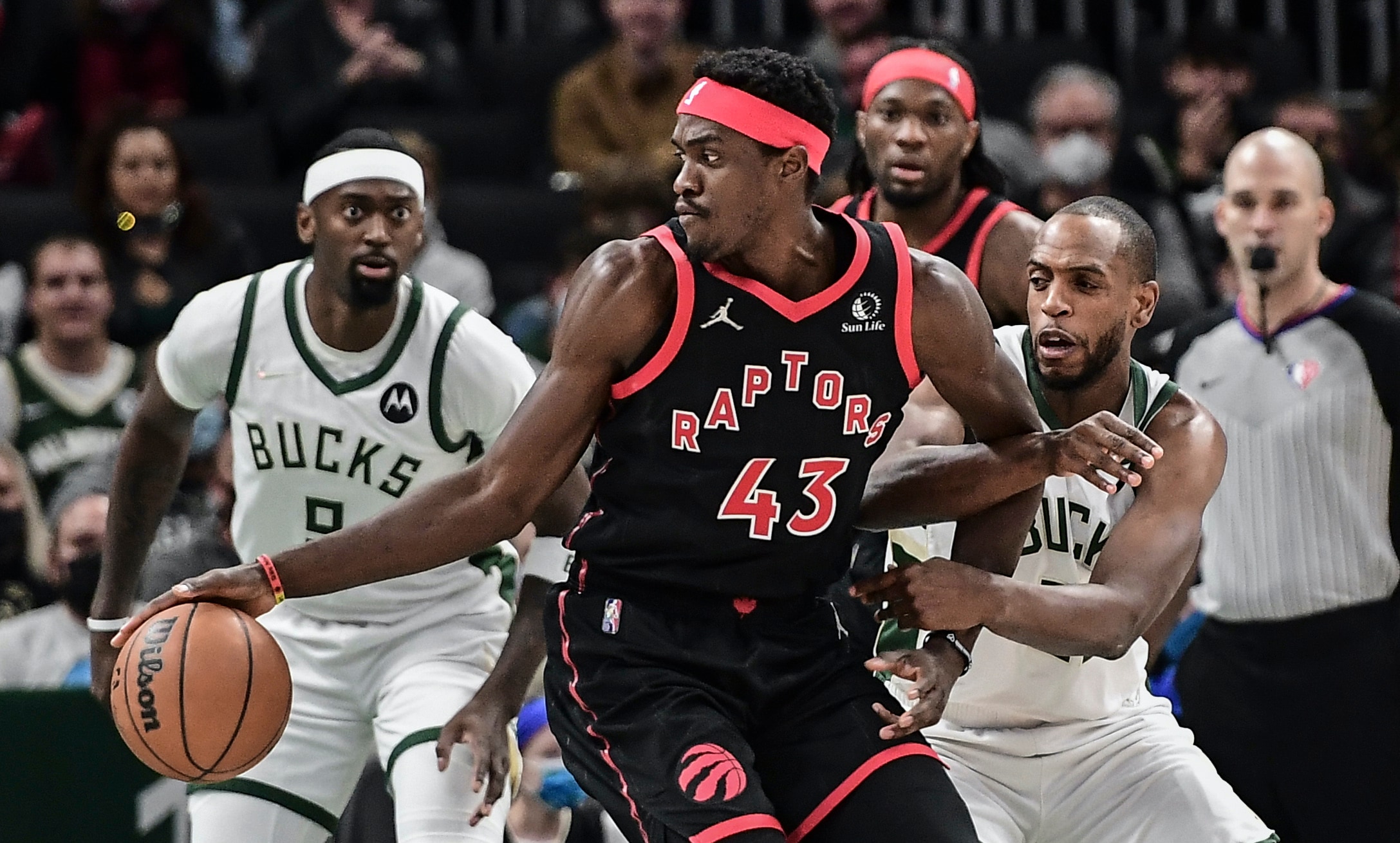 The Toronto Raptors are currently the sixth seed, but they have feasted on top Eastern conference teams this season. This includes being a perfect 3-0 against the Bucks so far. In fact, the Bucks have lost five straight to Toronto dating back to last season.

Thanks in large to the 2019 Eastern Conference Finals, the Raptors have a reputation for being “Giannis stoppers.” However, since that fateful series, Giannis has averages of 27.7 points, 13.3 rebounds, 7.5 assists, 1.5 steals, and 2.0 blocks per game against the Raptors. They will surly be a tough first round test, but this is one the Bucks should win.