It is getting to THAT time of the year where position battles are ongoing and players are fighting for a roster spot.  This means depth charts will be released early and often.  Today marks the release of the very first depth chart for 2022 NFL season!

Breaking Down The Packers’ Depth Chart: 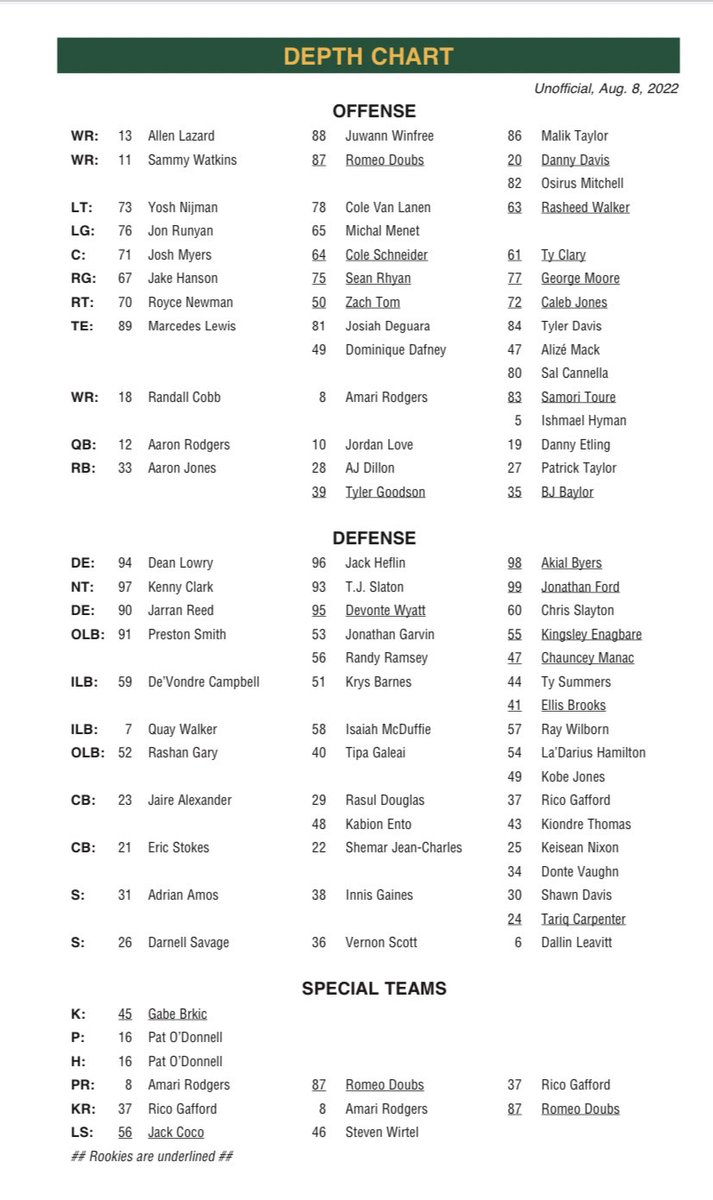 Per Rob Demovsky: You wanted a depth chart, now you’ve got one. (Note: Even though it was put out by the Packers. it’s still considered “unofficial.”)

What Immediately Stands Out?

No real surprises at the quarterback or running back positions (figures).  For wide receivers Allen Lazard, Sammy Watkins, and Randall Cobb are your top three.  Christian Watson (along with Mason Crosby) aren’t listed due to current injured status.  Marcedes Lewis is TE1, again with no Robert Tonyan listed due to injured status.  The offensive line is interesting, to say the least.  It will certainly look much different as players get healthy and win position battles, but Royce Newman at left tackle eye opening.

Quay Walker listed at ILB1 (opposite Campbell) is a good sign.  He is certainly making good impressions early.  Eric Stokes and Jaire Alexander are your CBs 1-2 with Rasul Douglas listed at CB3.  Vernan Scott and Innis Gaines fighting for that Safety number 3 position.  For now, it would appear that Amari Rodgers will get another shot at the punt returning responsibilities.  The speedy Rico Gafford getting the initial nod at kick returner.  Overall we are well aware that this will change many times between now and week one, but the initial depth chart provides SOME clarity as to where players are currently at.