The Green Bay Packers announced nine players would start training camp on the PUP list. Robert Tonyan, Elgton Jenkins, and Kylin Hill, who are recovering from torn ACLs were no surprise. However, there were several surprising additions such as Christian Watson, Mason Crosby, and Dean Lowry. One very intriguing and unfortunate addition is that of Patrick Taylor, who many projected to be the Packers’ third running back. If Taylor is forced to miss significant time, one of the Packers undrafted rookie running backs could end up as the third running back on the 53-man roster.

One of the Packers undrafted free agent rookie running backs is B.J. Baylor, who played his college ball at Oregon State University. After three seasons of little production, Baylor had a breakout year as a senior in 2022.

The Scouting Report on B.J Baylor

According to Pro Football Network, B.J. Baylor is adept at finding holes in the running lanes and following his blockers. He is also strong and does not go down on first contact. However, a very glaring weakness in his game is his inability to catch the ball in the backfield. In other words, Baylor has yet to prove he can catch screen passes or go out wide on passing plays. In their final analysis, they write:

“Baylor comes off a career season carrying the ball, but he is primarily an undersized downhill runner with average speed and no capacity to create yardage. The inability to catch the ball out of the backfield will be his downfall trying to make a roster.“

This weakness will certainly make it difficult for him to make the Green Bay Packers’ 53-man roster. Last season, AJ Dillon and Aaron Jones combined for 86 receptions and 804 yards. In very limited playing time, Patrick Taylor caught the two passes thrown his way. In other words, being able to catch the ball in the backfield is necessary for a running back to make the Packers 53-man roster. If Baylor struggles with this in training camp and preseason, he may not get the third running back role. 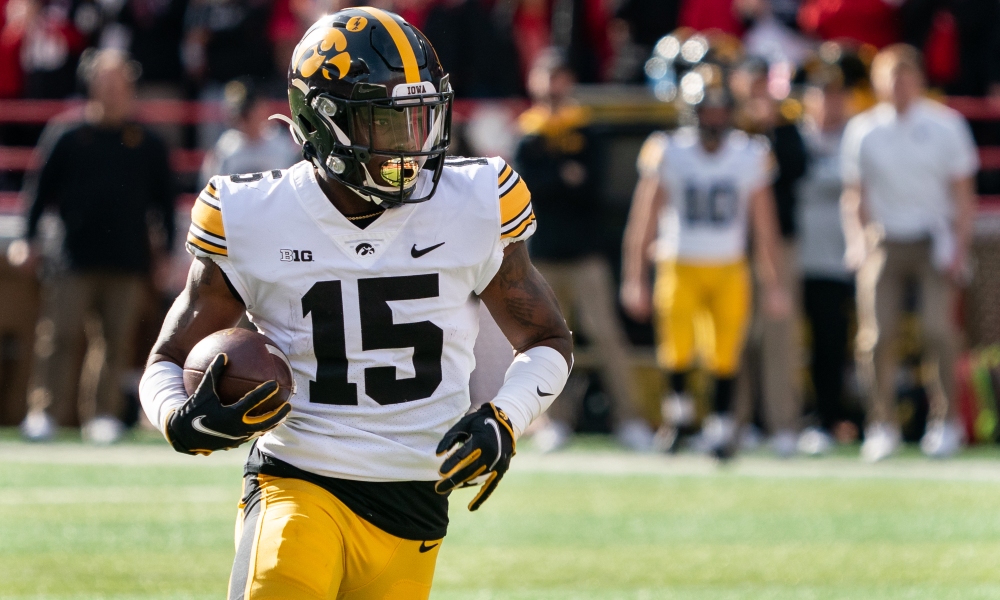 Tyler Goodson may be a name more familiar to Wisconsin sports fans. A product of Iowa, Goodson had three solid seasons of production with the Hawkeyes before leaving for the NFL.

The Scouting Report on Tyler Goodson

The Draft Network profiles Goodson has a slippery runner who will be best used as a rotational piece within an offense. Unlike Baylor, Goodson is adept at catching the ball in the backfield. However, Goodson often tries to be too fancy and extend plays. This allows defenders to tackle him for losses when he could have gained one or two yards if he’d run straight ahead:

“He does well when given lead blockers to put his head down and challenge the hole. Quick penetration in zone, however, can yield some really nifty cuts but unproductive carries, spending too much time dancing in the backfield and allowing defensive pursuit to close in around him. Would like to see a little more willingness to take the one or two-yard gain and not try to pull rabbits out of hats and lose yards.”

This scouting report indicates that Goodson has the better shot at making the Packers’ roster than Baylor. Despite three straight seasons of 1,000+ all-purpose yards, Aaron Jones may end up a cap casualty unless his contract is restructured after the season. If that happens, Goodson may have more upside to move into the second running back slot behind AJ Dillon.

Related: Everything you need to know about the drafted rookies at Packers training camp

Of course, just because Patrick Taylor is on the PUP list now does not mean he will be to start the season. Players placed on the PUP list before training camp can be activated at any time. As Bill Huber pointed out on Twitter, Taylor only missed four practices last season. We are not aware of the severity of his injury. It could be something very minor. If this is the case, Taylor should still be the favorite to win the third running back spot.