PFF: Matt Lafleur Ranked Below a .500 Coach Who Hasn’t Won a Playoff Game Pro Football Focus (PFF) released an article on Monday June 6th ranking the best head coaches in the NFL.  The metric is interesting and takes into account a multitude of things.  Matt Lafleur finished in a respectable position (6th), however it was below a few coaches that may surprise you.

What Metric did PFF use?

Using this idea in ranking the current NFL head coaches, we try to do two things: 1) properly account for a team’s talent level, and 2) predict something less volatile than wins. We do this by creating a multilevel model where the fixed effects are the salaries of each starter on both sides of the ball, including an indicator for if the player is a rookie, and the target is points scored or allowed in a season. A starter is defined as the player who took the most snaps at their position, filtering out key injuries. This was altered for several positions, such as the top three players being considered for wide receiver, cornerback, safety and linebacker, as well as the top two players qualifying for guard, tackle, edge and interior defender. 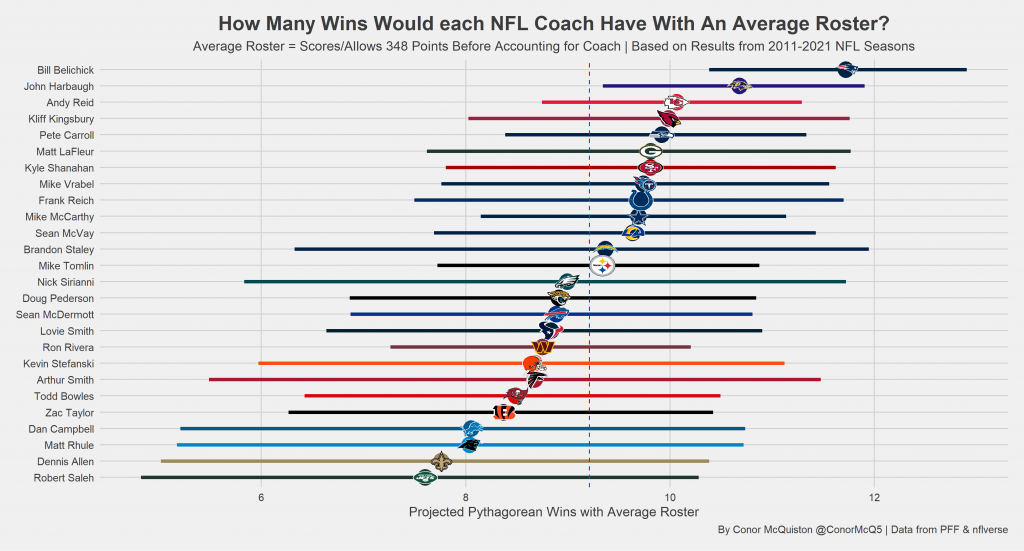 The first thing you notice is how heavily offensive success is favored over defensive success.  Bill Belichick is ranked first in both offensive and defensive contributions.  His 131 points above average offensively is roughly worth four times what his league-leading defensive contribution is.  LaFleur is ranked eighth offensively and ninth defensively from a points gained/allowed perspective per PFF.  This means that only Belichick and Harbaugh have overseen better offenses AND defenses relative to talent than LaFleur.

Who is ranked higher than Matt Lafleur individually?

There are eight coaches who have yielded better offenses than Lafleur per the metric that PFF is using.  Belichick, Harbaugh, Kingsbury, Reid, Mike McCarthy, Kyle Shanahan, and Mike Vrabel.  Sean McVay is tied with LaFleur at 55 points above the offensive average.

It’s hard to understand a scenario where Kingsbury or McCarthy are better offensive minds than LaFleur.  It is also pretty telling how much offensive coaches are truly responsible for defensive production (in this metric). Pro Football Focus’ look at the coaching landscape is at the very least, an objective look, at how coaching rankings might play out on the field.   even if you have issues with the methodology.