If you bet with me again last week, your bankroll grew a little more as the Bears-Packers game miraculously stayed under the total due to a sluggish second half. Aaron Jones also went off, registering 170 total yards and two scores. Lets see if we can stay hot in week 3 in this Packers/Buccaneers matchup.

The Packers bounced back last week with a 27-10 win over the Chicago Bears. It was much needed after a lackluster performance against Minnesota in week 1. The offense looked crisp in the first half, putting up 24 points before intermission. The second half was not as pretty, however as Green Bay looked sloppy in many areas and only managed a late field goal. The defense dominated against the pass, surrendering only 70 yards. They struggled overall against the run, giving up 180 yards on the ground. Tampa Bay, meanwhile improved to 2-0 by defeating the New Orleans Saints 20-10. Defense ruled the day in this one, as the score was 3-3 heading into the 4th quarter before the Buccaneers pulled away. The Bucs picked off Jameis Winston three times, returning one of those picks for a touchdown. They also sacked Winston six times and recovered two fumbles in a dominant defensive performance.

The Buccaneers enter week 3 with many key names on their injury report. First, last week’s Bucs game was highlighted by an on-field brawl that resulted in Bucs WR Mike Evans being suspended one game by the NFL. DT Akiem Hicks and WR Chris Godwin were ruled out on Friday. Starting LT Donovan Smith is listed as doubtful. Other key players RB Leonard Fournette, WR Russell Gage, and WR Julio Jones are all listed as questionable. I anticipate Fournette, will play, but I am not so sure about Gage or Jones. QB Tom Brady was also added to the report on Friday with a right finger issue, despite being a full participant at practice.

The Packers also enter the game with injury concerns. Sammy Watkins was ruled out with a hamstring issue (that didn’t take long). LT David Bakhtiari (knee), TE Marcedes Lewis (groin), WR Randall Cobb (illness), and WR Christian Watson (hamstring) are all questionable for Sunday.  Bakhtiari and Lewis both logged limited work in Friday’s practice, while Watson and Cobb did not participate.

The Buccaneers are currently favored by 1 point over the Packers. The market opened with the Bucs being favored by 2.5, but it has come down due to the laundry list of injuries in Tampa. I won’t always go through the injury report in as much detail as above, but to me it is the most important variable in handicapping this particular game. Tampa Bay is simply not where they could be on offense due to their injuries. Their defense has been insane, but how long can that unit put the team on their back? Green Bay, being the healthier team, has to look at this as an opportunity to beat an NFC rival while they are down. I expect a focused effort from Green Bay. Give me the Packers as short dogs in this one.

The total for this game sits at 42 as of writing. It opened at 45 last Sunday, and was bet down immediately. Most of the value was sucked out of this market early in the week. I still lean to the under, but at this point the total is so low that I am uncomfortable taking the under in a game quarterbacked by two all-time greats, Tom Brady and Aaron Rodgers. 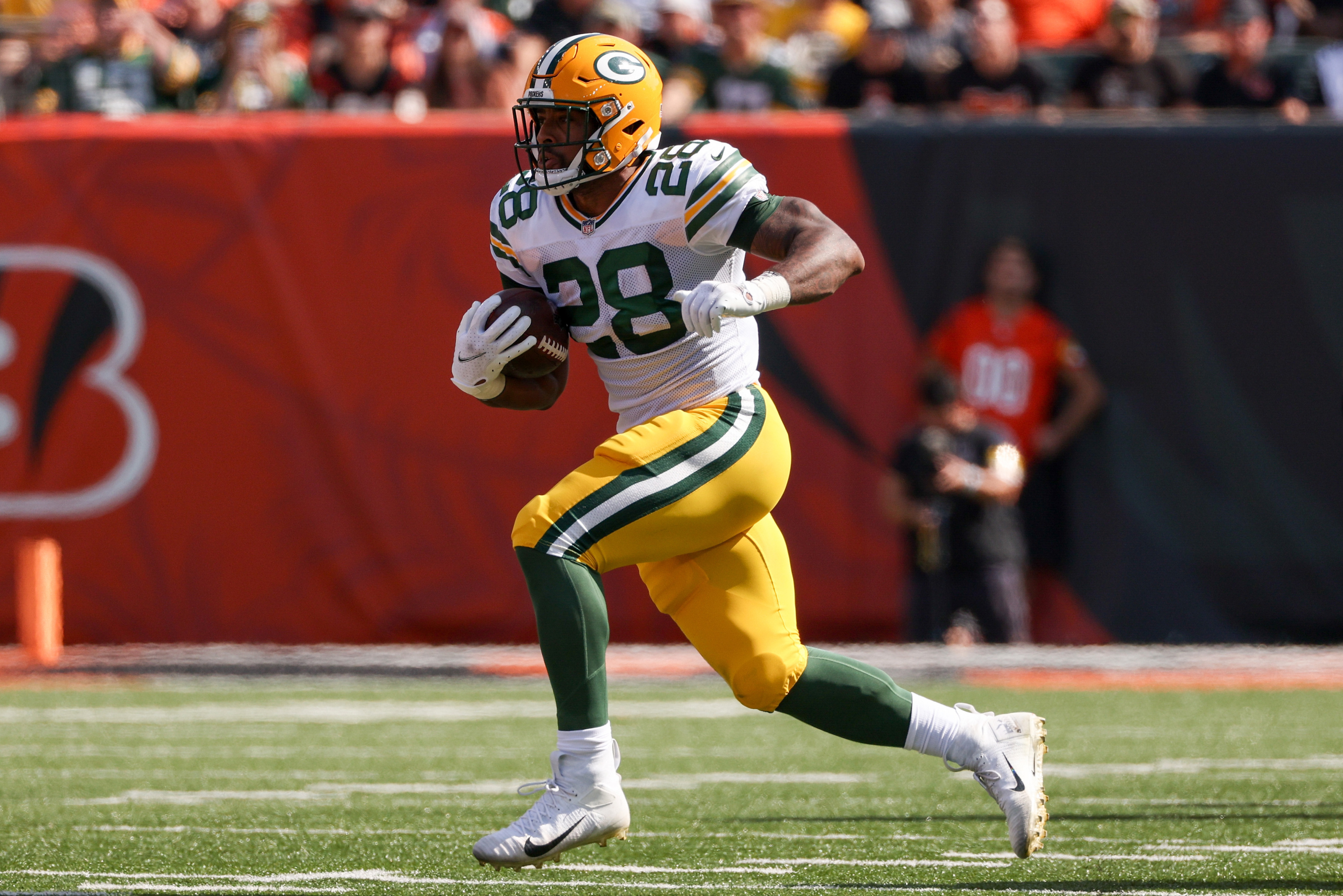 This week, I predict the Packers backfield torch will be passed to AJ Dillon. The Buccaneers run defense was impenetrable at times last year, but I think that unit has taken a step back this year. They have given up 4.5 yards per carry this year, up from 4.2 a year ago. Dillon is the play this week for a few reasons. First, the injury to Akiem Hicks is noteworthy. This should allow Green Bay’s interior lineman to commit more bodies to dominant DT Vita Vea. Dillon does most of his work between the tackles, so Hicks’ absence is more meaningful for Dillon than Aaron Jones. Additionally, Tampa has one of the fastest pairs of linebackers in the league in Lavonte David and Devin White. They make it very difficult to get to the edge. The best strategy may be to run right at them with a power back like Dillon, rather than trying to beat them to the edge with Jones’ speed.

On the Buccaneers front, I think the one player to look at is Leonard Fournette. The Packers did not look great against the run last week, giving up 180 yards to the Bears including some big runs from David Montgomery in the second half. Packers defensive coordinator Joe Barry tends to play a lot of light boxes with 5 or 6 defensive backs on the field. Tom Brady will check to the run often if he sees this. Considering the injuries to Tampa’s receiving corps, I think Fournette is in line for a lot of work on the ground and through the air on Sunday.