After the Packers tumultuous loss to the Vikings on Sunday, there are still some questions left to answer. In particular, what was the offensive game plan for the Packers heading into the game? Why didn’t Aaron Jones or AJ Dillon touch the ball more?

Despite the game not going the way Packers fans wanted, many were left wanting to see more of their stud running back duo. Especially the former Pro-Bowler himself, Aaron Jones, who saw limited action in the run game in particular.

AJ Dillon and Aaron Jones rushed 15 times yesterday. They also added eight receptions on 11 targets, and Dillon also had a nice rushing touchdown. Overall, they both were a solid part of the offense but neither back was able to take over. 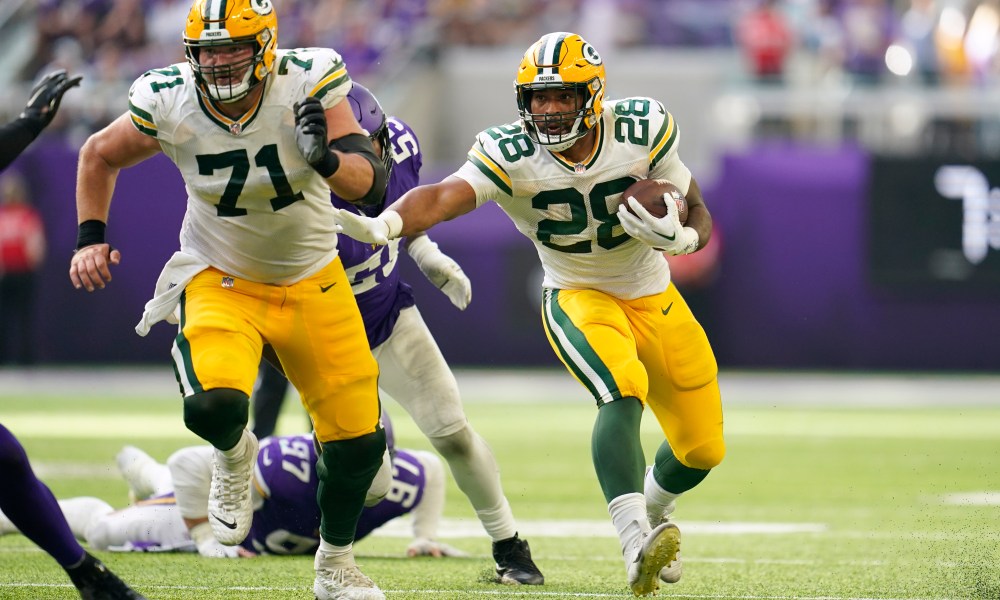 The snaps were similar for the two, with Jones playing 37 snaps and Dillon playing 31 out of a possible 61. Despite being on the field for most of the game, it is odd to only see 26 total opportunities for them.

The Packers seemed to be committed to the pass game yesterday. Rodgers and Love combined for 39 pass attempts. Unfortunately, the play breakdown didn’t have much of a result since the offense couldn’t string together multiple plays. The running backs didn’t play much, or get to have a major impact on the game, which was surprising considering their ability.

After the game Jones was asked about his opinion regarding his usage, and whether or not he is upset. Jones responded “No, Sir. I’m not frustrated,” and went on to say “I just do what I can when my number is called.”

Clearly, the talented running back is going to do whatever the team needs or wants him to do. He had a fantastic response and proved he put the Packers success first. However, if he were to complain about his carries in particular nobody would blame him. The 28-year old rushed for 1104 yards in 2020 and 799 yards last year, with the emergence of AJ Dillon.

With another week of work and a better idea of what the team needs to work on, there should be a different look next week. Jones realistically won’t play less and it wouldn’t hurt playing him more. Perhaps he could reach his Pro-Bowl status again this year.