As the month of July roles on, front offices around Major League Baseball begin to stir up all the news. With the trade deadline fast approaching, many contending teams including the Brewers, are looking for trade pieces to upgrade any weak spots showing. Now is the fun part! Now fans get to look at all the options the Brewers may be able to get to make that late October push.

David Peralta’s 2022 by the Numbers

Peralta has played in 68 games with Arizona with 66 of those starting in left field. The 34 year-old comes with his share of hardware winning a Silver Slugger Award in 2018 and a gold glove in 2019. Peralta has always been known as a steady bat with a well above average glove. 2022 has been no different. This season Peralta is batting .241 with a .758 OPS. Peralta has complimented this with 11 home runs and 37 RBI. Serving in somewhat of a platoon role, the lefty has primarily hit 5th in the Diamondbacks order while facing righties. Peralta has good power from the left side that fits anywhere in the order.

To go with his on field play, Peralta has been heralded as a great locker room guy during his tenure with Arizona. Peralta has been very active in the Diamondbacks community and has had the respect of every teammate he comes into contact with. This trait would certainly fit in well with the Brewers clubhouse during a stretch run.

Why Peralta Fits The Brewers Needs The Brewers were hoping to see Tyrone Taylor run with the opportunity to be the every day centerfielder. Unfortunately, that has not been the case. Taylor’s struggles since getting an every day opportunity have left the Brewers searching for an outfield upgrade. With Taylor, Renfroe, McCutchen and Davis all being righties, the Brewers could use a left handed outfield bat to compliment Christian Yelich. Peralta could slot into a platoon role with Tyrone Taylor very well. Defensively, Peralta has spent most of his time in the corner outfield spots. His presence in the lineup would likely shift Christian Yelich to center field or Hunter Renfroe.

The Brewers have been known to target players who have multiple years of club control remaining. While Peralta does not fit this mold, he does fit what the Brewers are looking for. The Brewers have been rumored to be in on Kansas City Royals outfielder Andrew Benintendi as well. Benintendi figures to have a higher price tag on him than Peralta does. Because of this, Peralta could be a nice fall back option. Rarely will David Stearns go for the big fish in the trade market and Peralta is not that. Peralta is just the under the radar move that Stearns is known for.

What Would David Peralta Cost 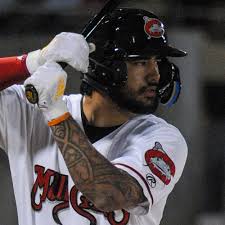 Peralta should be an affordable option for the Brewers. In past years, the Brewers have shied away from dealing top prospects and Peralta would not require any of those. The Brewers would most likely be looking at 2-3 prospects in the 30-50 ranking range. A couple names that would be of interest to Arizona would be:

While the market bidders may drive this price up, these three would certainly be a good foundation for Arizona to work with. With several contending teams in on Andrew Benintendi, there will be a number of teams looking at Peralta as a fall back option. Because of this, the Diamondbacks may wait till the after Benintendi is moved before moving Peralta. If Arizona waits to deal Peralta, the price may become steeper than the Brewers are willing to pay.

With the trade deadline rumors in full swing be sure to check out Wisconsin Sports Heroics for other profiles on potential trade targets including Michael A. Taylor and Ramon Laureano.