The Green Bay Packers are truly lucky to have the best quarterback and wide receiver in the NFL. That definitely goes without saying. But, one thing that we noticed this season is that they just might have the best running back duo as well. I do not think that anyone, including myself, expected the level of balance that AJ Dillon and Aaron Jones had this season. When a team has two running backs who complement each other as much as Dillon and Jones do, it is going to be a tough team to beat. Let’s take a look at how both players performed this season and give them an overall grade:

When comparing Aaron Jones’ statistics from this season to last season, he did decline a little bit. But, to his dismay, he did miss one game due to injury and was a large focal for opposing defenses. Here were his 2021 season statistics:

Despite a decline in rushing categories, Aaron Jones still had a great season. If a running back can succeed in the passing game as well, that only adds more fire to an offense. It is going to be important that Jones can still perform in the passing game, especially with the uncertainty of Davante Adams’ future in Green Bay. I do not think that there was anything more that Green Bay could have asked from Aaron Jones this season. If he continues his stellar career, the argument should be made of Jones being one of the best running backs in Packers history. 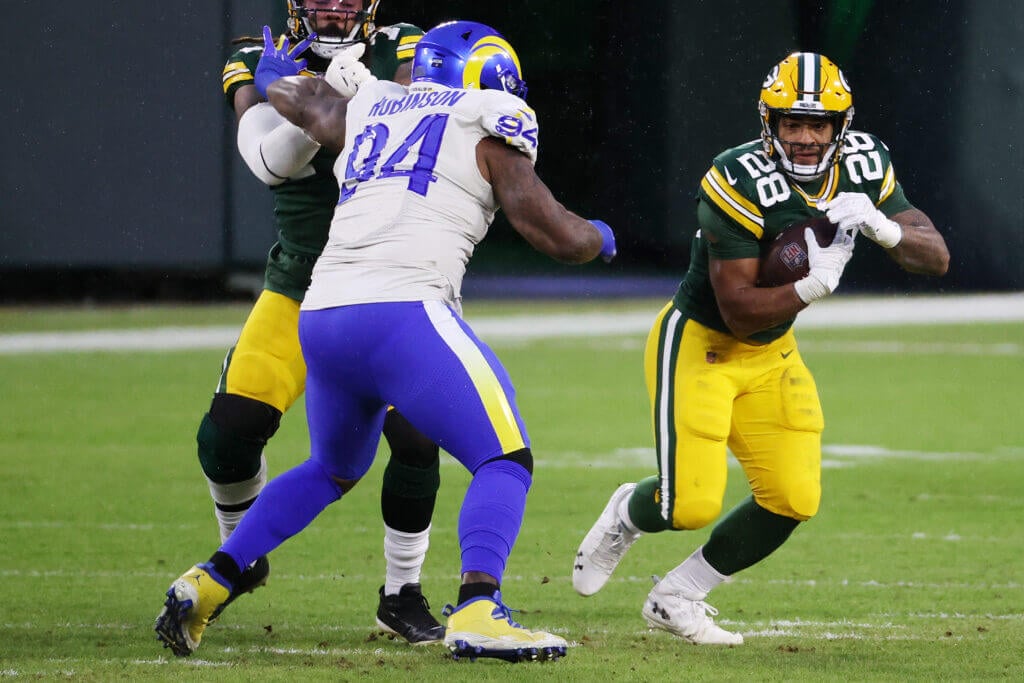 If AJ Dillon were a rookie this season, he would have been a strong candidate for Offensive Rookie of The Year. No one, including the Packers, would have imagined the breakout season that he had this year. With a ton of scrutiny on this pick in the 2020 NFL Draft, Dillon is looking like Brian Gutekunst’s best selection in that draft. Here are AJ Dillon’s statistics from this season:

Packer fans have to be feeling good with the progress of AJ Dillon. For a player to burst onto the scene that fast, the expectations now are going to be higher than this season. Do I think that he can continue this upward trend? Absolutely. Green Bay would not have gotten this far or been as successful if Dillon were not in the picture.  As mentioned above, there is no other running back tandem in the NFL like Aaron Jones and AJ Dillon.