The Green Bay Packers took Tariq Carpenter in the seventh round of the 2022 NFL Draft.  Carpenter primarily played at Safety during his Georgia Tech Career, 52 games.  However the Packers will have him start his NFL career at the inside linebacker position.

“Tariq, we’re going to move him to the inside linebacker room. He’s a big guy, but he can run,” coach Matt LaFleur said during his interview.

Carpenter fits the profile of a hybrid safety/linebacker. He’s 6-3 and 230 pounds but ran the 40-yard dash in 4.52 seconds (1.55-second 10-yard split) and posted elite numbers in the vertical (39″) and broad jumps (11-4).  He transitioned to linebacker at the Senior Bowl during the pre-draft process, giving the NFL a preview of how he could handle the position.  His length and athleticism with physicality against the run and experience playing in the box, a transition to a hybrid role seemed likely.

In many ways, Carpenter looks like a discounted version of 2020 first-round pick Isaiah Simmons. 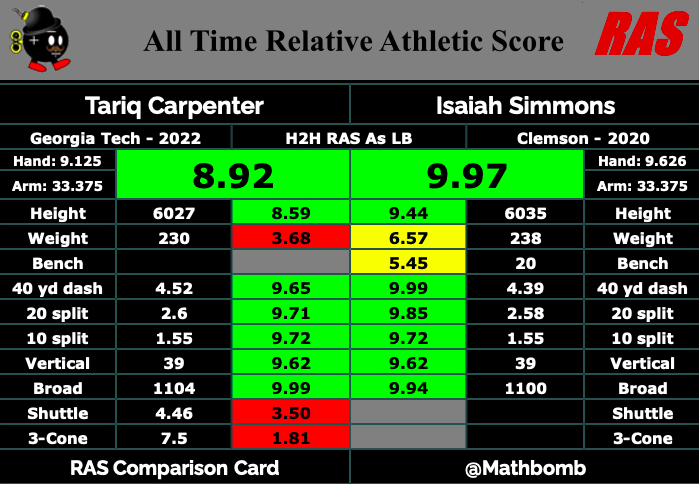 “He’s a little bit of a tweener because he has the size of a linebacker but he plays safety and he has that kind of speed. He’s really, really physical,” Gutekunst said. “We’ll figure out exactly how he fits, whether he goes to the linebacker room or safety room at different times and what packages he plays in on defense, but certainly on special teams is one of the reasons we took him.”