New York is looking to interview Brewers GM Matt Arnold for their President of Baseball Operations. Last week, the Brewers shut down the Mets from interviewing David Stearns for the same position.

Talks have heated up in the last week. After whiffing on multiple high-profile executives, the Mets want Brewers GM Matt Arnold to lead their front office.

The 2021 World Series between the Astros and Braves is set to begin. The other 28 MLB teams are looking for ways to improve to get there next year. One of the most active teams already this offseason has been the New York Mets.

Mets players are likely to be moved as soon as the offseason officially begins, but their front office is already deep into a makeover.

Talks Are Heating Up

New York Post author Mike Puma provided the story earlier today and even suggested that an offer had already been made to Arnold.

The Mets' top candidate for president of baseball operations at the moment appears to be Brewers general manager Matt Arnold. There has been contact, and I'm hearing the Mets may have made him an offer.

The Brewers front office has become a hot commodity this off-season. Multiple teams have shown interest in both David Stearns and Matt Arnold. Brewers owner Mark Attanasio has stated that he will do anything in his power to keep Stearns around.

In the case of Matt Arnold, if a team like the Mets offers the President of Baseball Ops position to him, the Brewers can’t block the interview. That is because he’d be moving up a position in the front office. Teams cannot block the upward movement of executives. 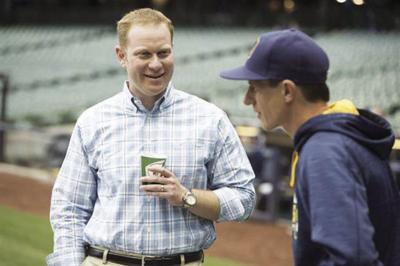 Matt Arnold is one of the most talented GMs in all of baseball and has grown exponentially under the wing of David Stearns. It’s no wonder why the Mets are serious about getting him on board.