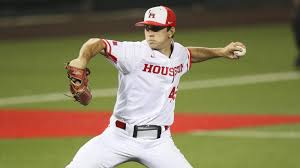 One of the key pieces of the Josh Hader trade is working his way up the Brewers’ farm system. Robert Gasser was promoted from Double-A Biloxi to Triple-A Nashville Tuesday afternoon.

While many fans may be clamoring for the call up of Esteury Ruiz, the biggest return piece for Hader was the powerful lefty Gasser. Gasser was the 71st pick by the Padres in 2021. The 23 year-old spent his the majority of his 2022 season at the High-A level of the Padres system. Gasser was promoted to Double-A ball after being acquired by David Stearns and company August 1st.

Since joining the Brewers organization, Gasser has looked the part of a highly touted prospect. MLB.com listed Gasser as the Brewers 11th ranked prospect and the 2nd ranked pitcher. Making 4 starts in Biloxi, Gasser sported a 1-1 record with a 2.21 ERA. Gasser has struck out 26 batters through 20 innings of work and a .194 opponent batting average. Gasser has also continued to look the part of growing powerhouse.

Robert Gasser stays sharp, striking out 9 with 1 walk in 5.2 innings on Friday for the @BiloxiShuckers

Gasser has thrown 20.1 innings in AA with 26 Ks and 8 BB#ThisIsMyCrew pic.twitter.com/Ye0rtT5Waf

Standing at 6’1, Gasser has worked hard to bulk up and add velocity to his 4-seamer. Gasser has a fastball that  touches 95-96 and compliments it with a 2-seamer, curveball, slider and changeup. With a vast arsenal, Gasser is working his way up the minor league system.

The Brewers’ can use young arms to compliment their outfield heavy farm system and Gasser is just that. Only time will tell how long it will be before he takes the mound in Milwaukee, but his quick promotion to Nashville shows as a vote of confidence from the front office.