Brewers: Free Agent Targets That May Help Strengthen The Offense

After 120 years (Excluding the shortened 2020 season), the National League finally will have a designated hitter!  This change had been much anticipated and upon the conclusion of the lockout, the Brewers added Andrew McCutchen.  McCutchen is expected to serve primarily in the DH role.

David Stearns says the bulk of Andrew McCutchen’s ABs will come as the DH. They also could use him in corner outfield spots occasionally, but it does not sound like he’ll see much time in CF.

McCutchen provides some much-needed pop in the lineup, especially against left-handed hitters.  While he is expected to see the bulk of at-bats as the DH, one thing we know about David Stearns is that it is not out of the realm of possibilities for him to open the checkbook to add more offense.  Spring Training has already started, but let’s remember that it’s never a bad time to explore options that can help improve the offensive depth.

Here are three Free Agent targets that the Brewers could consider to help improve the offense. At 34 years old, Davis is coming off of a bounce-back year compared to his 2020 season, although he still did split time between the majors and minors in 2021. It is more likely for him to repeat his fringe bench-worthy season than improve, but given his history with the Brewers, he is an interesting option.  Odds are the Brewers could sign him to a minor league deal to wait and see if that 40+ home run power swing returns. 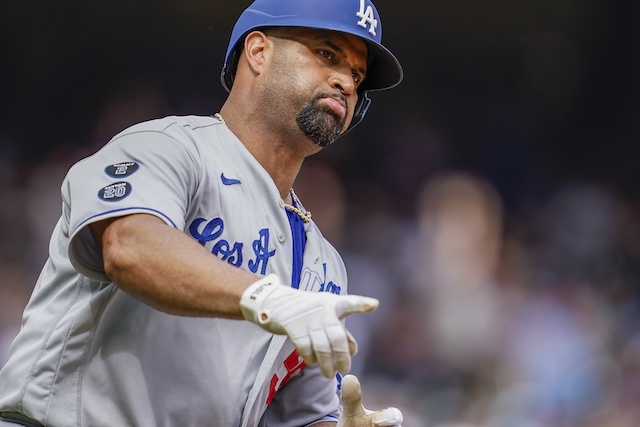 Pujols may be in his early to mid-40s, but he has no plans on retiring anytime soon.  He currently is 21 home runs shy of 700 and is a known clutch hitter.  He could fit into this team by being a right-handed bat option late in games where he comes in with runners in scoring position.   Pujols would be a safe, cheap option to split time with other depth pieces on the roster and would provide a veteran presence.

After playing a utility-type role for the Met’s last year, Conforto is still a free agent. I think he could be a useful player for the Brewers.  Conforto could work between the infield and outfield depending on the status of other players.  He is exactly the type of player-manager Craig Counsell likes to have on his roster.  He is 29 years old which gives him about three more years of his prime but will come at a hefty cost.  It seems like a long shot that the Brewers are the team to give him his much-anticipated payday, but the longer he remains available the more those chances increase.

Follow me on Twitter @markmusgraveiii.  Follow us @WiSportsHeroics for more great content. To read more of our articles and keep up to date on the latest in Wisconsin sports, click here! Also, check out our merch store for some amazing WSH merchandise!