While the MLB lockout rolls on, Brewers fans can pass the time by starting to look at who could be future contributors for the crew. Keith Law of the Athletic released his top 20 prospect list for the Brewers‘ organization on Tuesday offering a glimpse into what the organizations farm system is developing. 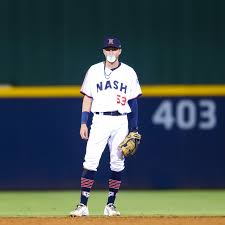 Coming in at number 1 on the list is the 2018 first round middle infielder, Brice Turang. Turang was taken fresh out of high school in 2018 and has worked his way up the Brewers farm system. At just 22 years old, Turang was able to work his way to Triple-A in 2021. Turang looks to be well on his way to a big league debut in no time. Law notes that Turang is still developing his power to go along with his great glove. Turang also came in at #85 on Law’s top 100 MLB prospects list.

Following Turang at #2 is the Boston College product Sal Frelick. Frelick was drafted in the first round of the 2021 draft by the Brewers. Frelick also followed Turang on the top 100 list coming in at #88. The 22-year-old does not pack a lot of power, but the speedy center fielder has the early makings to be a future tone setter at the top of the Brewers line up. Speaking of speedy centerfielders, coming in at #3 is Garrett Mitchell. Mitchell was the Brewers first round pick in 2020 coming out of UCLA. Mitchell has terrific speed and defense, but the durability and offensive capabilities remain the biggest question marks.

Following Mitchell at # 4 is second baseman Tyler Black. Black was taken with the Brewers second round pick in 2021 coming out of Wright State. Black had a strong 2021 at Wright State where he hit .383 with 13 home runs. While Brewers fans may be scared by his high leg kick, his offensive profile is fit for the big leagues.

Rounding out the top 5 on Law’s list is centerfielder Joey Wiemer. Wiemer turned heads during his 2021 season as he traveled from Low-A Carolina to High-A Wisconsin. Wiemer hit .296 with 27 home runs and 30 stolen bases between the two clubs last year. His play in 2021 also earned him the honors of being named the Milwaukee Brewers 2021 Robin Yount Minor League Player of the Year. With his leave it all out there playing style, Wiemer figures to be a fun watch for Brewers fans for years to come.

The @Brewers prospect has 8 homers in his past 11 games with 4 dingers in 5 games since joining the @TimberRattlers. pic.twitter.com/7KMEEYs67v

Highlights From the Field

Brewers fans may be surprised to see Aaron Ashby falling to #7 on Law’s list. With the year Aaron had in the majors and excitement around his 2022, it is probably fair for fans to feel more optimistic about Ashby than this. The exciting, 19-year-old Hedbert Perez came in at #7 while Mario Feliciano came in at #14. Falling off the list is once-promising outfielder Corey Ray. While we may see some of these names make their big league debuts before too long, it would also be fair to prepare to see some of these names go elsewhere if Stearns and company decide to use them as trade bait.