Three Bold Predictions for the Packers’ Running Game in 2021 In a move that many wanted but few expected, the Packers resigned Aaron Jones to a four-year $48 million contract before free agency started.  Jamaal Williams signed with Detroit, but the Packers are bring back a great duo in Jones and AJ Dillon.  As the team prepares for the draft, we make some bold predictions about the Packers’ running game next season. 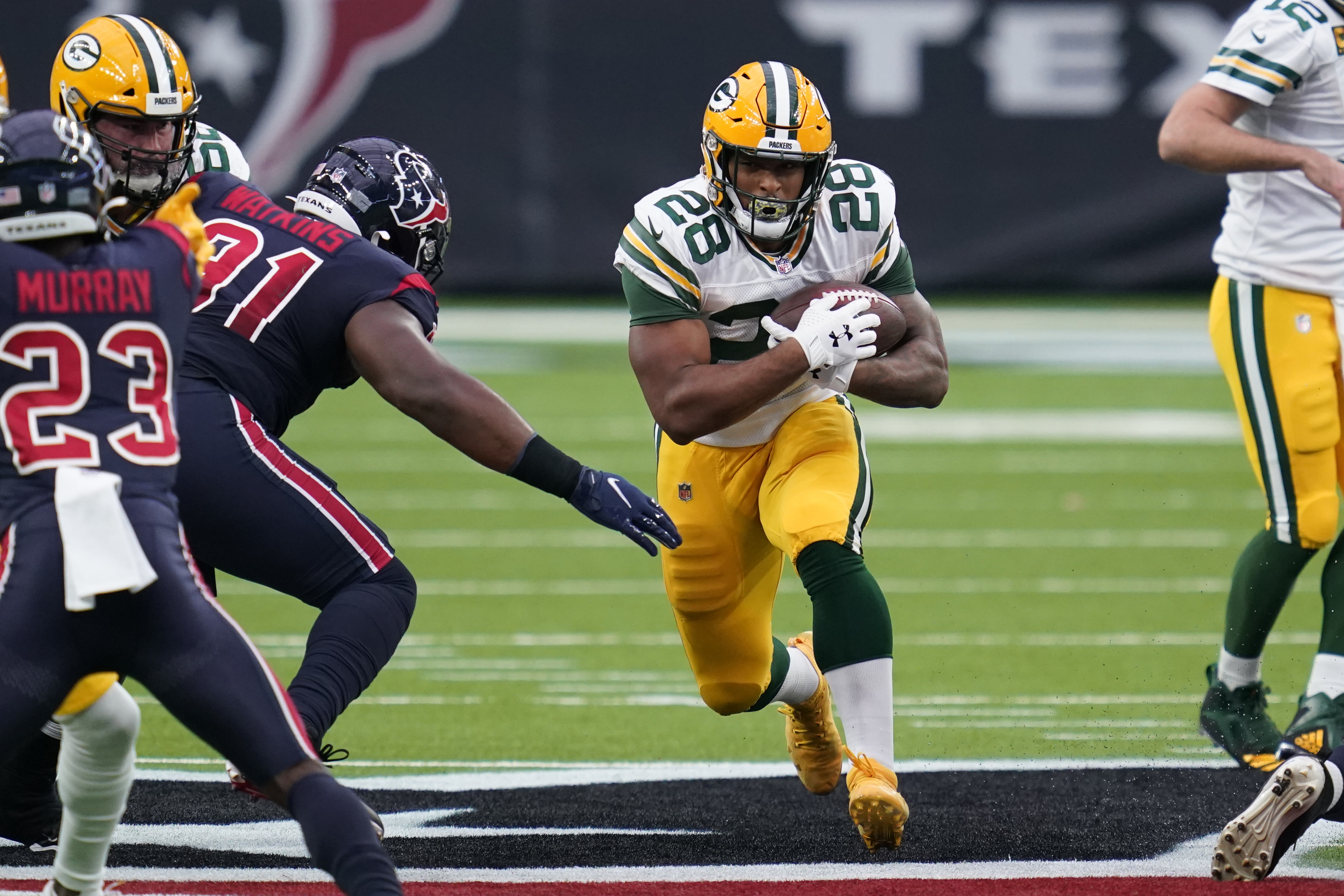 AJ Dillon turned some heads in 2020 for a variety of reasons.  For one, the Packers drafted him in the second round.  Many felt the Packers should have taken a wide receiver in that spot.  For another, his massive quads circulated social media, earning him the nickname Quadzilla.

On the field, he did not get too many attempts playing behind Jones and Williams.  However, he made the most of the opportunities he was given.  Dillon finished 2020 with 242 yards on 46 rushing attempts, good for a 5.3 yards per carry average.

In 2020, Jamaal Williams had 119 rushing attempts.  If Dillon gets that many, plus a few more due to the lack of a talented rookie behind him, he could have a very productive season.  Let’s estimate he gets 130 rushing attempts and his yards per carry average dips to 4.8.  That would give him a season total of 624 yards.  With Aaron Jones hitting his prime and with his ability to rush for 1,300-1,400 yards, the two combining for 2,000 yards is certainly possible. 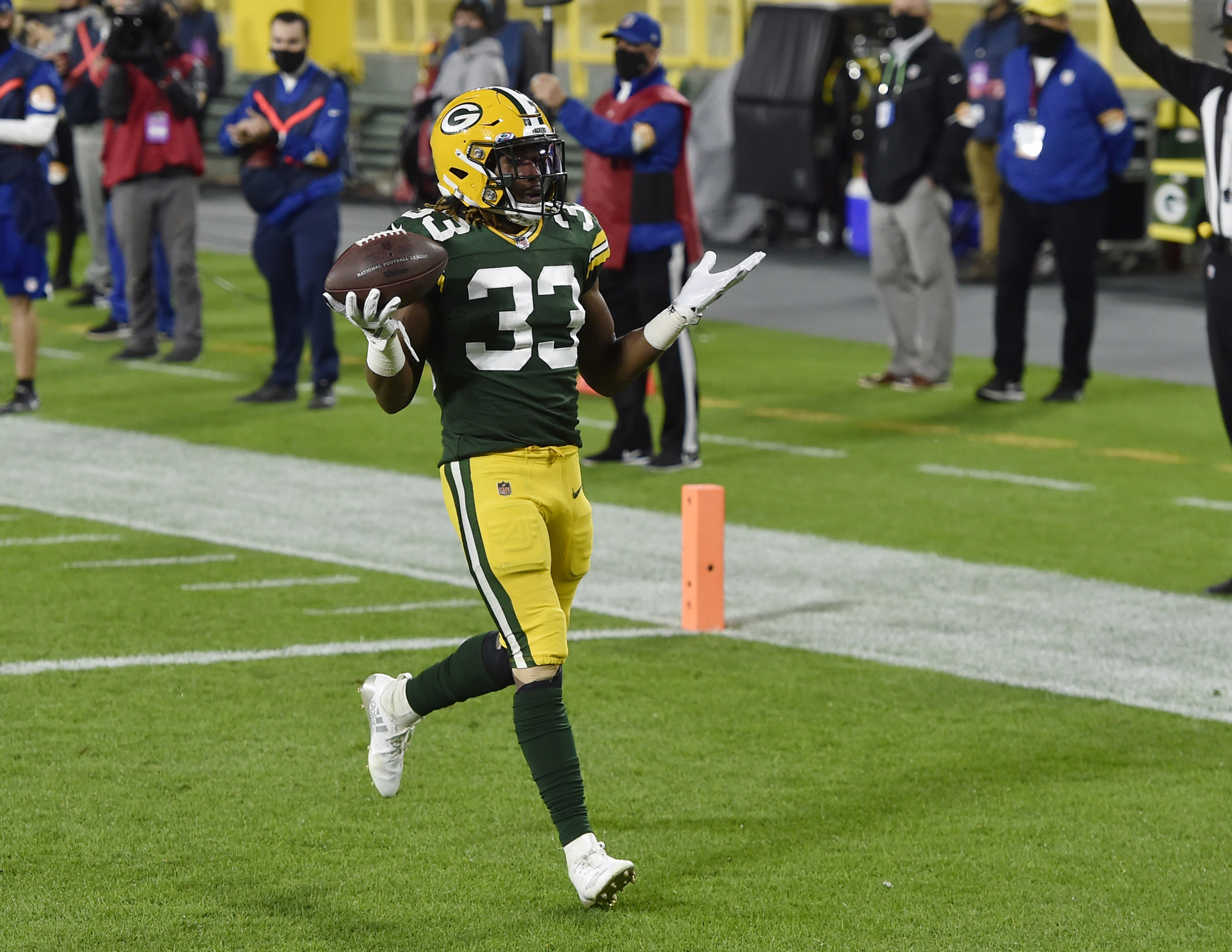 As far as getting to the end zone goes, this may turn out to be a less than bold prediction.  After all, Aaron Jones led all NFL players with 19 total touchdowns in 2019.  However, this prediction is less of a question about whether or not Jones will rack up scores as it is if Dillon will.

Last season, AJ Dillon scored rushing two touchdowns, and they each came in the same game.  Dillon also had a receiving touchdown, giving him a total of three.  Jamaal Williams, too, had three total touchdowns.

The increase in Dillon’s scoring numbers, however, will likely come from an increased usage on the goal line.  Dillon is a brutal runner and is not afraid to run at defensive linemen, as he showed against Tennessee.  Additionally, Dillon will get more looks in the passing game on screen passes.  Once he gets a full head of steam, he is tough to bring down.

Aaron Jones is an above-average receiving back as well, giving the Packers two dual-threat running backs.  Look for Jones to rack up 15 total touchdowns while Dillon accounts for 10 total scores.

Speaking of the duo’s receiving abilities, look for the Packers to make good use of them in 2021.  In 2019, Aaron Jones had 49 receptions for 474 yards.  Last season, he had 47 receptions for 355 yards.  Over the past two seasons, backup Jamaal Williams averaged 35 receptions himself.  If Jones’ and Williams’ average total receptions are added together over the past two years, they combined for 83 receptions per season.

The Packers’ passing game was among the best in 2020.  As Jones hits his prime and AJ Dillon’s role increases, it is not out of the realm of possibility that they both find increased roles in that passing game.  This prediction may be the boldest of the three, but it is definitely attainable given both backs’ receiving capabilities.

This should go without saying, but AJ Dillon is more than ready to take a larger role in the offense.  Much could be said about it, but for now, watch his highlights from the game against Tennessee to see what he will bring to the table in 2021.