The Green Bay Packers made one of the biggest wide receiver free agent signings in recent memory. After Davante Adams was traded to Las Vegas and Marquez Valdes-Scantling signed with Kansas City, the team found itself lacking at the wide receiver position. Green Bay took a step to help replace those two weapons by signing Sammy Watkins to a one-year deal in the middle of April.  Watkins has been open about what he came to Green Bay for.  Revitalizing his career is on the forefront of his mind.  He wants to show that he can be that number one wide receiver again.  His trainer has apparently seen enough to be convinced by this goal. 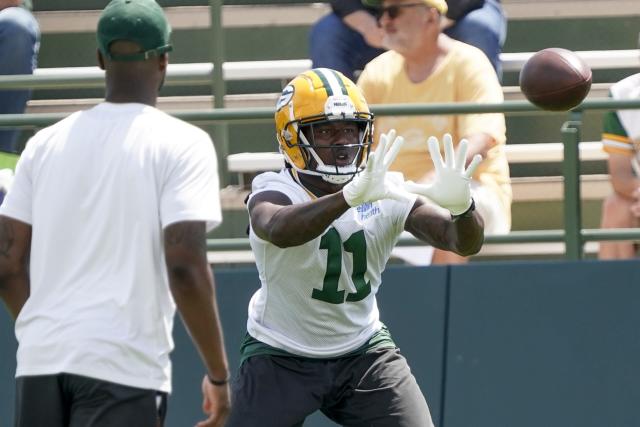 Unprompted, Bert Whigham talked up Sammy Watkins, who’s also working out in Orlando with Gabriel Davis.   Watkins played only 457 snaps last season and caught 27 passes for 394 yards with a touchdown in 2021. He didn’t catch a pass after Week 13. However none of that matters going into the 2022 season.

“That guy is going to be good for the Packers. He started working with us like seven weeks ago, and he said he wanted to be ‘college Sammy.’ Sammy is going to have a big year. He told me, ‘I want to be Clemson Sammy Watkins.’ And I was like, ‘OK, let’s do it.’ He’s just up there squatting 405 for eight right now like it’s nothing. He started around 218, and he’s at 225 right now, too. He’s going to go be a No. 1 in Green Bay.

News like this doesn’t come around as often as you’d think.  A skill position player changing him body this much in one off-season.  Why is he bulking up you ask?  Our best guess is durability.  Watkins has been open about his injury past and how committed he is to staying on the field and staying healthy.  A bigger body can help protect itself against hits on the field.  With news like this though, you are worried about one aspect.  Could he lose his speed?  When adding more weight that is always going to be your first question.  Especially in a game like football.  This is something we will certainly watch for in training camp and into the season.  One thing is for certain though, a durable Sammy Watkins can be scary good in this league.