With another disappointing loss this past weekend Green Bay Packers’ fans are growing impatient. This marks the  second week in a row Green Bay has lost to a New York team. In those games the Packers were favored to win by 8 points (Giants) and 7.5 points (Jets). Losing two weeks in a row is unfamiliar territory for Green Bay. Packers’ fans are used to experiencing 13 win seasons, a steak which started in 2019. Now the Packers can only lose one more game this season to keep that streak alive. Green Bay fans are starting to look towards the future and wondering when it will be time to move on from Aaron Rodgers.

Aaron Rodgers in not the problem in Green Bay currently. Sure this year hasn’t gotten off to the greatest start but he’s still the reining back-to-back NFL MVP. One fan claimed the Packers should have traded Rodgers back in January.

A few thoughts on the state of the #Packers in form of a thread.

I said back in January the Packers needed to trade Aaron Rodgers. I thought they were better off. @AndyHermanNFL did a video talking about needing to know when your Super Bowl window is. GB missed the boat.

Another fan voiced their displeasures about how the Packers handled their offseason.

It’s hard to overstate how badly Gute and the Packers messed up this offseason.

First of all, they should’ve just traded Aaron Rodgers.

But when they didn’t trade him, they didn’t do nearly enough to replace Davante Adams and are getting minimal impact from their draft class.

When things aren’t going well it’s easy for fans to point fingers and add their two cents about what could have been done differently. Simply put, this is a rough patch for Green Bay. Every team goes through it, some more than others. Realistically Aaron Rodgers isn’t going anywhere anytime soon. In addition, Aaron Rodgers recently signed a 3 year, $150,815,000 contract with the Green Bay Packers, including a $40,800,000 signing bonus, $150,815,000 guaranteed, and an average annual salary of $50,271,667.

Lots of people are saying the #Packers should have traded Aaron Rodgers.

None of them seem to acknowledge that Rodgers would have to approve any trade destination.

Rodgers repeatedly said he wanted to play his whole career for one team.

When will the Packers move on from Aaron Rodgers? 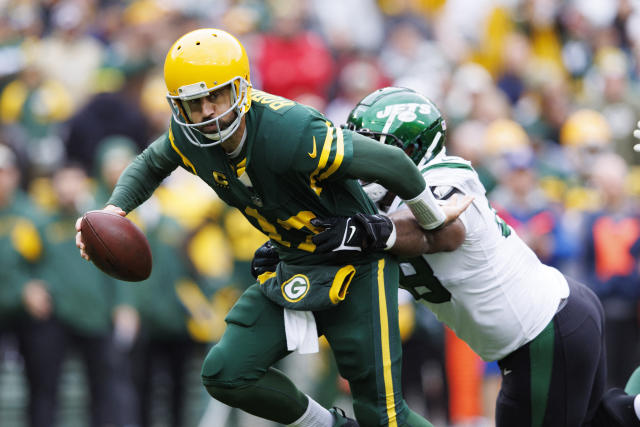 Aaron Rodgers will turn 39 years old in December. He is currently the 5th oldest active NFL player.  The hard truth is that the Aaron Rodgers era in Green Bay is coming to an end. Its hard to say what year will be Rodgers’ last.  Jordan Love, Green Bay’s current backup quarterback,  doesn’t seem like he has what it take to fill Aaron Rodgers’ shoes at this point. The verdict is still out on whether he can develop into a franchise quarterback. But the question still remains, who will take over as QB1 when Rodgers’ decides to call it a career?