Every year, Sports Illustrated gives annual awards to teams and athletes.  This year’s award for Team of the Year was given to the Milwaukee Bucks.  Despite falling short of their goal to win a championship, the Bucks were given the award due to their involvement in social justice movements.

On the right side of history.

On August 26, prior to Game Five of the opening round of the NBA Playoffs, the Milwaukee Bucks made the unprecedented decision to boycott the game in protest of the officer-involved shooting of Jacob Blake in Kensoha, Wisconsin.  After deciding to boycott the game, the Bucks’ players released the following statement: 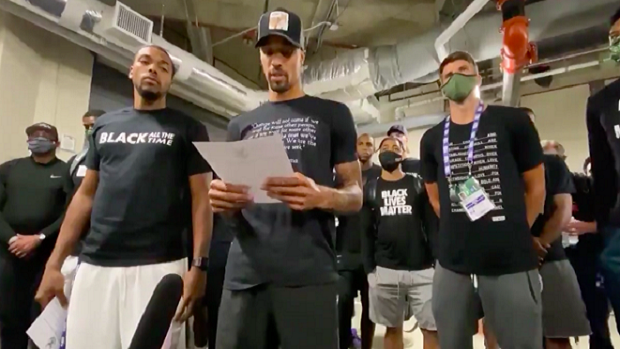 “The past four months have shed a light on the ongoing racial injustices facing our African American communities. Citizens around the country have used their voices and platforms to speak out against these wrongdoings.

“Over the last few days in our home state of Wisconsin, we’ve seen the horrendous video of Jacob Blake being shot in the back seven times by a police officer in Kenosha, and the additional shooting of protestors. Despite the overwhelming plea for change, there has been no action, so our focus today cannot be on basketball.

The players would go on to call for the Wisconsin legislature to return from a long recess to address the issue.  In addition, they called for fans all over the country to vote on November 3.

The Bucks started a chain of events within the NBA bubble.  The Orlando Magic, the Bucks’ opponents, refused to accept a forfeit and joined the boycott.  Other NBA teams chose to boycott their games, bringing the NBA playoffs to a halt.  Back in Milwaukee, the Brewers joined the Bucks by boycotting their August 27 game against the Reds.  The Reds, in turn, joined the boycott as well.

Other Team of the Year Candidates

The other candidates for SI’s team of the year were all champions in their respective sports.  The Kansas City Chiefs are the reigning Super Bowl Champions.  The Los Angeles Dodgers ended a 32-year World Series drought in the COVID-shortened season.  The Tampa Bay Lightning won the Stanley Cup in 2020.  Interestingly, absent from the finalist list was the NBA Champion Los Angeles Lakers.