Brewers fans can get excited about some positive injury news! The Brewers are expected to activate Brandon Woodruff and Kolten Wong for Tuesday’s interleague game in Tampa Bay. Both players will be welcome sights for an injury riddled Milwaukee team.

According to the Brewers website, Brandon Woodruff has been listed as the probable starter for game one of the series. Woodruff has been on the 15 day IL with a high ankle sprain since early June. While nursing the ankle back to health, Woodruff was set back with a flare up with Reynauds Syndrome. This condition caused Woodruff’s finger tips to feel numb and cold while trying to pitch. With the obvious struggle this can cause to grip a baseball, the news was a bit concerning for Woodruff and the Brewers.

Fortunately, for Woody and the Crew, this condition does not appear to be a long term concern. Woodruff was able to make a rehab start at Class-A Appleton Thursday night. Woodruff pitched a dandy throwing five innings allowing just one run scored on a solo home run. The veteran accumulated seven strikeouts through those five innings. Woodruff stated after the game “I feel good coming out of it, so all positive.”

The Brewers will certainly be looking forward to one of the their staff aces returning to the lineup. Since he has left, the Brewers have gotten by with Jason Alexander, Ethan Small, and Chi Chi Gonzalez all getting spot starts and filling in where need be. Woodruff has had an up and down 2022 for his standard. Woody has started nine games going 5-3 with a 4.74 ERA. When the big righty is fully healthy and locked in, he is one of the best pitchers in the game. For Woodruff to return to his normal form will most likely take a couple starts. His return at least starts to bring the Brewers rotation back to full strength. 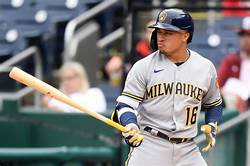 Since going on the 10 day IL on June 8th with a calf injury, Kolten Wong has had a slow recovery. Wong had a slight setback during his injury list stint, but appears to be back on track to join the Brewers for their road trip in Tampa Bay. Wong played in two rehab starts this past weekend with Class-A Appleton. During those two games, Wong totaled one hit (a home run) and a walk.

During Wong’s absence, the Brewers have used the likes of Jace Peterson, Michael Brosseau and Luis Urias to fill in at second. Defensively Wong has been a huge absence for the crew. His veteran presence and gold glove make him one of the top defensive second baseman in the league. The Brewers have been able to fill the gap for Wong’s defense adequately, but his return will surely help the run prevention unit.

Where Wong Fits In

Where Wong will fit into the batting order upon his return remains a question mark. Since Wong has been on the IL, the Brewers have seen the birth of “Leadoff Yeli”. Since taking the role of the leadoff man, Yelich has started to look the parts of Yeli pasts. While Yelich’s power has still been lacking, the hits and on base percentage have continued to increase. Wong, who has been the typical Brewers leadoff hitter since being acquired has not had a season to remember at the plate. With a .228 batting average and 34 strikeouts, Wong could use an opportunity to get his bat warmed up before returning to the leadoff spot. Wong may slate in the six or seven spot early on his return to achieve just that.

The Tampa Bay Rays have been a very solid team so far in 2022 and the return of these two veterans will greatly help the Crew against them. Hopefully this is the start of more players returning than players leaving for the injured list.