The Milwaukee Brewers and and Boston Red Sox made a big trade ahead of the MLB lockout. In that deal the Brewers sent Jackie Bradley Jr., Alex Binelas, and David Hamilton to the Sox in exchange for Hunter Renfroe. On Monday July 25, the two teams completed yet another trade, this one far less noteworthy. In this deal, the Brewers sent minor league outfielder Abraham Almonte to the Red Sox in exchange for cash.

#RedSox dealt for some outfield depth today, as they acquired OF Abraham Almonte from the #Brewers for cash considerations.

The Trade of Almonte Was One of Many Minor League Moves 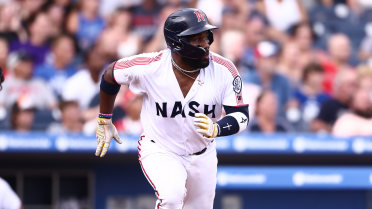 Abraham Almonte was never going to be a part of the Brewers’ future plans. Hopefully, for him, he is able to get some playing time with the Red Sox. For now, he is assigned to the Worcester Red Sox, Boston’s Triple-A affliliate.

The most notable move was the promotion of Brewers’ top prospect Jackson Chouiro to High-A. It did not take long for Chourio to pick up where he left off in Low-A as he got a hit in his first at bat with the Wisconsin Timber Rattlers:

One swing, one hit for Jackson Chourio at High-A. pic.twitter.com/6jnjCWHxzf

Chourio followed that up with a RBI double in his next at-bat:

In addition to being the Brewers’ top prospect, Chourio is the 36th ranked prospect in all Major League Baseball. At just 18 years old, he is still a few years away from reaching the Majors.