According to ESPN’s Adrian Wojnarowski, the Milwaukee Bucks are among the contenders for veteran P.J. Tucker. Tucker has garnered a lot of attention ahead of the trade deadline, and it seems the Bucks are interested in making a move. What would it take to land Tucker? What does this mean for the team if they’re able to successfully trade for him? Let’s take look!

The Bucks' interest in P.J. Tucker continues to simmer as ESPN's Adrian Wojnarowski reported that Milwaukee is among the contenders in play for the veteran ahead of the trade deadline. https://t.co/ElhZsiWUud

A Big Name on the Way Out of Houston

Following some remarks about P.J. Tucker’s displeasure with the Houston Rockets, teams began looking into securing the veteran. Tucker expressed he was uncertain about his future in Houston, and delayed contract talks furthered that stance. The Bucks are not unfamiliar with P.J. Tucker. Reports before the 2020-2021 season indicated the Bucks expressed interest in Tucker, but there was very little done with that interest. Now, as the trade deadline approaches, the Bucks may be interested in putting together a package to land Tucker. So, what are some hypothetical trade packages the Bucks could put together?

According to Adrian Wojnarowski, the Rockets are not too concerned about receiving picks. Rather, they’d like a player to plug into their lineup right away. This is a sigh of relief for the Bucks, especially when looking into the current pick situation. However, this means making a choice on who it is the Bucks would need to send to Houston. The player that makes the most sense to move is Brook Lopez.  Lopez has been inconsistent in the early stages of the 2020-2021 season, and the fact that he is also a center makes this move seem the most likely. Brook Lopez has lots of experience and with former Buck Christian Wood on Houston’s roster, the Rockets will have two centers they can look into using. Wisconsin Sports Heroics writer Mitch Lang wrote about a potential trade involving Lopez and Tucker in early February. Take a look at that article here. 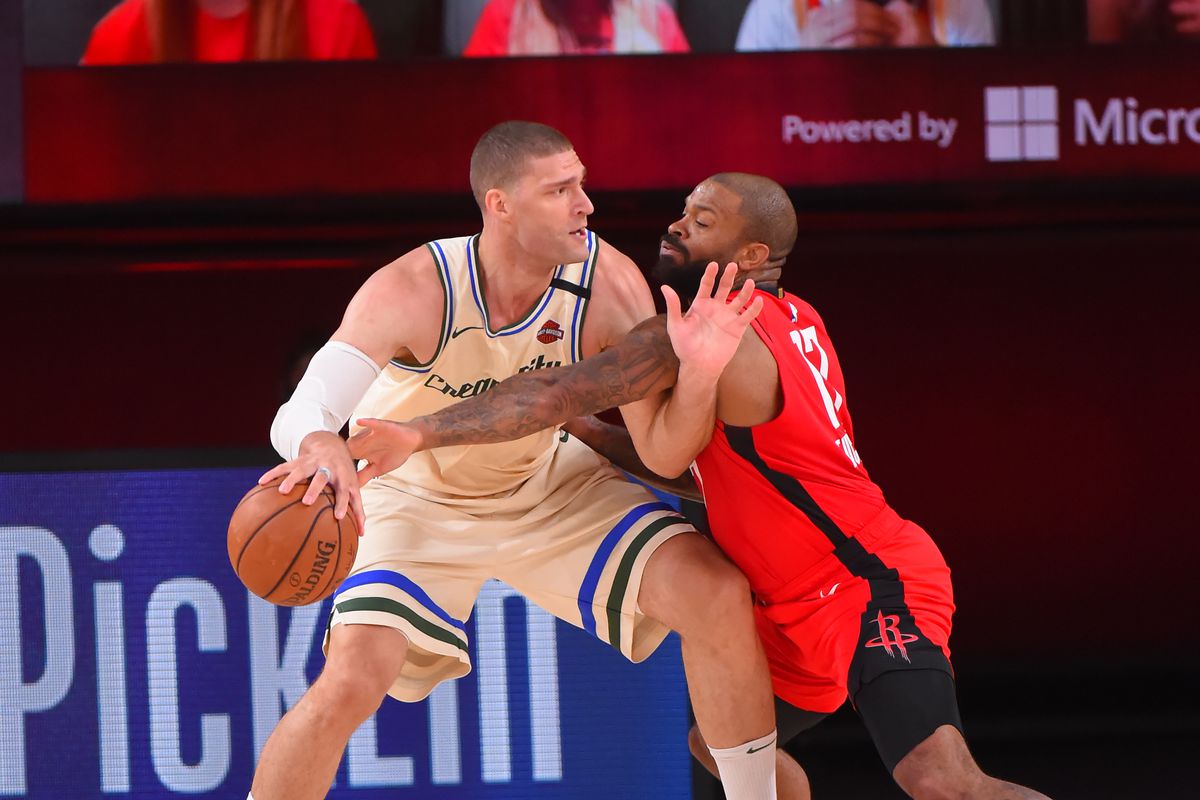 How Would P.J. Tucker Fit With the Bucks?

P.J. Tucker is a power forward, but also has experience as a center. With the departure of Brook Lopez, this means Tucker would take over the responsibility of playing center. Tucker will still have the ability to play at the power forward, but a bulk of his time will be playing at the 5. The Bucks would also most likely call up undrafted rookie Mamadi Diakite, who has seen success in the G League, to slot in as a center/power forward as well. To put it simply, the Bucks would be without a true center. However, P.J. Tucker brings in shooting ability and the ability to guard the paint at a formidable level.

Milwaukee has shown their desire to make a move for P.J. Tucker, and it may be a move that would benefit them. The Bucks have the ability to pick up a big with good shooting ability who is a pest on defense. Following lackluster play from Brook Lopez, it may be the change of direction the Bucks need at this point in the season to keep up their hopes of pursuing a title. Will Jon Horst pull the trigger on this trade? Only time will tell.