Wisconsin was lead by freshman guard Jonathan Davis with 17 points, going 4-4 from three-point range. Micah Potter also finished the game with 12 points and 8 rebounds. The Badgers bench also provided a big spark with 35 of the teams 72 points, their best mark on the season.

The Badgers are now 14-5 on the season and are currently 4th in the Big Ten conference standings, 1.5 games back of Michigan.

Coming off their overtime victory over Indiana Tuesday evening, Illinois looks to carry their winning ways going in Champaign. The 12th ranked Fighting Illini defeated Indiana 75-71 using their experience to get the job done on the road.

Illinois was led by senior guard Trent Frazier with 19 points and had four of the Fighting Illini’s seven three-point baskets.

Illinois has now won three straight games and a record of 12-5 on the season. The Illini currently sit half a game above Wisconsin in the Big Ten standings at 8-3. With a win Saturday, the Badgers would sit alone in second place.

Tip-off for the game at the State Farm Center is scheduled for 1:30 PM on Fox. 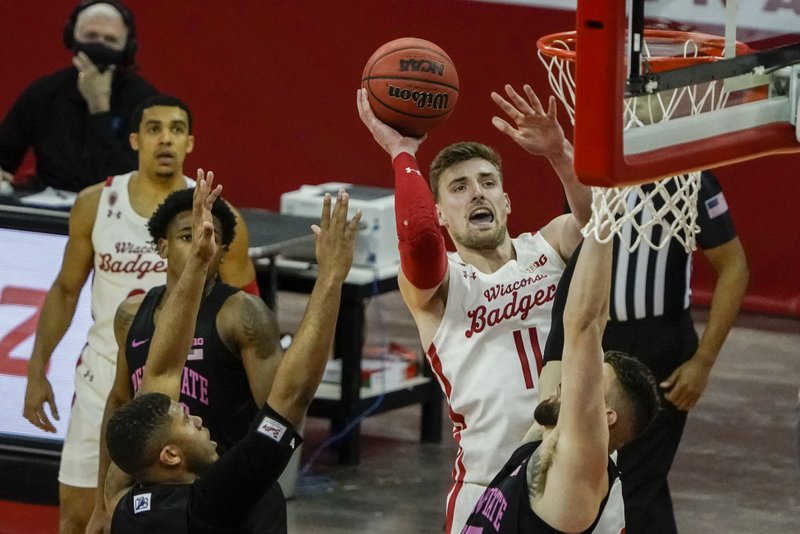 Although the stats never popped, Nate Reuvers had a solid night against Penn State on Tuesday. In 18 mins, the senior finished with 9 points on 4-5 shooting. Reuvers also had two rebounds and a block as well. His teammate Micah Potter was also productive and both did a great job containing Penn State’s big man John Harrar. While the defense was important to note between the two, it’s the way they controlled the offense that’s more important to note.

When Potter and Reuvers found ways to get touches down low, they both took advantage. Whether they used a drop step or helped clear space, both had success guiding this offense. With how reliant Wisconsin has been from the three-point range, seeing them involved more was important to the team’s success.

Now Kofi Cockburn is the real deal. It’s not going to be as simple for the pair to be successful on Saturday. However, if the Badgers can still get success from their bigs in some capacity, it will boost this offense. I have no doubt that Wisconsin will still be aggressive from three-point range. What happens when that isn’t working? Getting Reuvers and Potter involved on offense is crucial to the team’s success. Especially with march right around the corner.

One of the key issues in Wisconsin’s loss to Penn State previously was their defense failing them in the 2nd half. Wisconsin led by just three points at halftime and would go on to give 50 points in the half, costing the Badgers the game.

In their matchup on Tuesday, Wisconsin led by just two at the half and slowly let Penn State back in the game going into halftime. This time the Badgers adjusted. Wisconsin held the Nittany Lions just 25 points and had complete control.

One challenge Wisconsin is going to face is Illinois’s talented backcourt, led by Wooden Award Watchlist candidate Ayo Dosunmu. Dosunmu currently leads the team with 21.2 points per game and shooting over 41% from three-point range. Dosunmu is the heart of the Illini offense and has burned Wisconsin before.

Illini loaded w/talent but in my view Dosunmu still the catalyst. He burned #Badgers w/18 points, 6 assists + 5 boards in 71-70 victory last season. Had a hand in all 14 points in final 4:16. Assists on 3 consecutive threes, hit a jumper + buried a three.

In last year’s matchup, Dosunmu finished with 18 points and six assists in their road victory against the Badgers. He was a part of Illinois’s final 14 points, whether assisting or scoring. Containing penetration to the hoop will be important on Saturday. Against Penn State on Tuesday, the Badgers defense started switching when being picked around the top of the key. Under Gards system, switching isn’t typically used. If the defense can execute the same way as Tuesday, it may challenge Illinois on offense.

Another player to watch from the Fighting Illini is another Wooden Award Watchlist candidate, Kofi Cockburn. Cockburn is averaging a double-double this season with 16 points and ten rebounds a game. Micah Potter and Nate Reuvers have been inconsistent against more aggressive big men this season. Limiting Cockburn from rebounds and points inside is going to be a tall task. Averaging over 40 a game as a team, limiting Illinois on the glass has to be a point of emphasis on Saturday.

Keys to the Game: Illinois

With one of the strongest in college basketball, the Fighting Illini need to keep that same spirit against the Badgers on Saturday. Averaging over 82 points a game, Illinois is also in the top 20 for field goal percentage and three-point percentage. With their two Wooden Award Watchlist nominees, many believed Illinois could be a Final Four team at the start of this season. So far, that seems to be holding true.

If Wisconsin were to beat a team like Illinois, they would need to hold Illinois on the defensive end. One way for Illinois to counter this is to attack at the Badger guards. The Badgers have struggled to contain teams inside. When teams are able to attack the lane, Wisconsin crumbles on defense. If Illinois is able to get the ball into the lane, the offense will light it up. Whether it’s a drive and kick, dish down to Cockburn, or take it straight to the hole, the Illini will be unstoppable if they get inside.

Getting to the free-throw line is also a big part of Illinois’s offense. The Illini average 22.2 attempts a game. Although they aren’t a great free-throw shooting team (average 70%), getting Wisconsin into foul trouble is key. If Potter and Reuvers struggle with fouls, Wisconsin will have a tough time containing Illinois with a smaller lineup.

Along with an elite offense, Illinois also features a stingy defense that contains team night in and night out. This season the Illini hold teams to just over 40% shooting which ranks in the top 70 in the country. Teams also have struggled shooting from three-point range against Illinois as well, shooting at 34.5%. With great size and athleticism, Illinois does a great job limiting teams inside at the rim.

The only chip to the Fighting Illini defense is they do allow a lot of three-point opportunities. If Wisconsin is able to knock down open looks, it could present a problem on defense for Illinois. If the Illini are able to extend Wisconsin’s offense past the top of the key, the Badgers will have a difficult time running their offense. Illinois’s backcourt needs to be stick tight to Trice and Davison and force them out of position. After turning the page against Penn State, the Badgers carry good momentum heading to Champaign. In many instances, Wisconsin struggles to control games in the second half and let teams back in. On Tuesday they never let Penn State back in the game and it was important to see that from Wisconsin.

Here’s the problem. The Badgers haven’t faced a team with an elite offense and defense since their humiliating loss to Michigan. Illinois is an elite team and coming off great wins against Iowa and Indiana. In four of Illinois’s five losses, teams scored over 80 points in the game. Now in some close wins, Illinois has struggled on offense but they relied on their defense to get it done.

Greg Gard mentioned after their loss to Penn State on Saturday that outscoring teams on offense and winning is a “fairytale”. When they play great defense, they win games. Although I think Wisconsin could win this game, it’s going to be challenging to contain this Illinois offense. Because of that, I think Fighting Illini emerge victorious Saturday afternoon.