When the Green Bay Packers did not take a wide receiver in last year’s draft, many were left confused.  All season, fans and others blamed the rare offensive struggles on the lack of a rookie wide receiver.  One of the most unfortunate effects of this was the derogatory comments made towards Marquez Valdes-Scantling, whose life was even threatened on social media over some dropped passes.  Despite the struggles, it was MVS who was a rare bright spot in the NFC Championship game.  His late-season play gives plenty of indications that he will break out in 2021.

Indication #1- MVS Does More than Meets the Eye

This may not be the “sexiest” reason why MVS will have a breakout season, but it is a major part of why he will be on the team.  In fact, if for some reason he was not on the Packers, he would be picked up by any other team because of his intangibles.  There are few, if any, better blocking receivers than MVS.  Case in point, look at the long Aaron Jones touchdown run above.  Notice how MVS takes out two-three would-be tacklers by himself without missing a beat.

Indication #2- Even with Drops, MVS Put Up Good Numbers There is no getting around the fact that MVS needs to improve his catch percentage.  However, even at 52% he was still the second-leading receiver on the team.  He hauled in 33 receptions for 690 yards and six touchdowns.  In addition, he led the entire NFL in yards per catch with 20.9.

As the team’s deep threat, MVS will not get the quantity of targets that Adams or Lazard will get.  However, the targets he does get will be for large gains, and with his speed he can create separation.  With drops the lone weakness in his game, that gives him a focus for the offseason.  The man is a professional; he’ll get the work in.

By the way, other Packers’ receivers with drop issues early in their careers: Jordy Nelson and Davante Adams.  This is not to say that MVS will be the next star number one wideout.  What it does mean is that patience pays off. 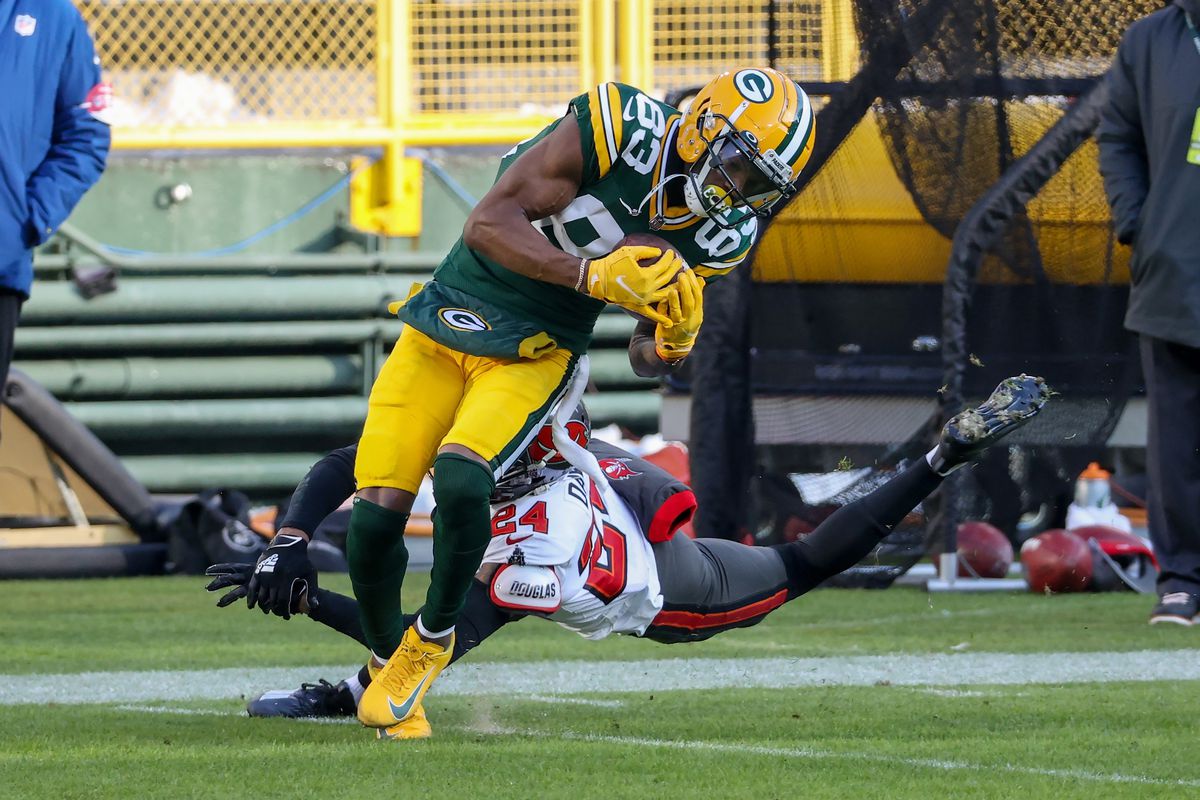 Another fact that there is no getting around is that the Packers did not have many bright spots in the NFC Championship loss.  One of the few, though, was MVS.  In that game, MVS had four receptions for 115 yards and a touchdown.  He also had zero drops.  In as big of a game as any, he showed up and had the game of his life.  If that isn’t a good foundation to build off of, I don’t know what is.

Next season is a contract year for MVS, so the pressure is on him to produce to earn a big payday.  He showed he can in the NFC title game, and we should expect him to do so all season in 2021.