Note: This is Part II of a three-part series concerning predictions for each Bucks player for the 2021-22 season.  For Part I with predictions on the starting five, please click here.

While the Bucks’ starting five will likely remain the same in 2021-22, the bench saw a significant overhaul during the offseason.  Although there are several returning players, there are more new faces that will have a big impact on rotations.  This article will cover the core bench players: Pat Connaughton, Bobby Portis, George Hill, Grayson Allen, Semi Ojeleye, and Rodney Hood.  I will discuss the remaining bench players (the trenches) in Part III. 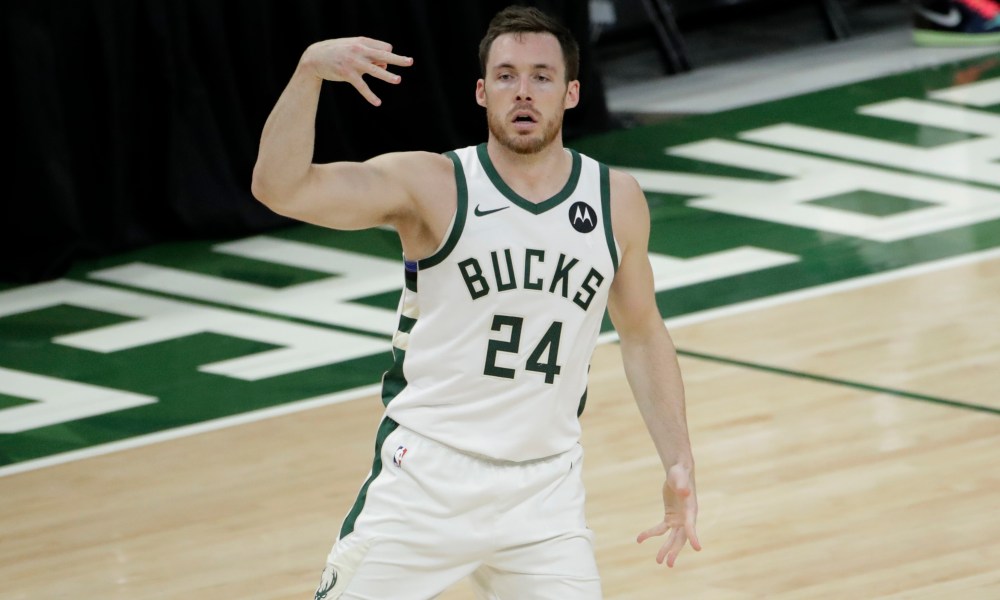 Pat Connaughton re-signed with the Bucks after testing free agency in the aftermath of the 2019-20 season.  He’s generally regarded as the unofficial leader of the Milwaukee bench and coined the term “bench mob.”  In the 2020-21 regular season, Pat scored 6.8 PPG with 4.8 RPG and 1.2 APG.  In terms of shooting, he maintained a 43.4 FG%, a 37.1 3P%, and a 77.5 FT%.  His stat line remained consistent in the playoffs, and actually improved overall.

Pat’s role with the Bucks changed in 2020-21, often seeing significant playing time at the 4 while Giannis Antetokounmpo moved to the 5 in the Bucks’ “small ball” line-up.  His overall effectiveness in this role is a matter of debate, but it gave Coach Budenholzer more opportunities to use Pat’s athleticism.

As Pat enters his fourth season with the Milwaukee Bucks, fans largely know what to expect from him.  There are no significant questions about his health or what he’ll provide the team with in 2021-22.  Connaughton has some issues with consistency, especially with his shooting.  Will he be able to become a more reliable three-point shooter?

The old cliché that you can’t teach an old dog new tricks will apply to Pat entering into the 2021-22 season.  This isn’t necessarily a bad thing, as Pat will continue to provide leadership for the team with a consistent stat line that will resemble 2020-21.

Although the Bucks signing Bobby Portis largely felt like an afterthought due to the publicity of the Jrue Holiday trade, he quickly became a fan favorite in Milwaukee.  Chants of “Bobby! Bobby! Bobby!” filled Fiserv Forum as the People’s Champion put up 11.4 PPG, 7.1 RPG, and 1.1 APG.  Portis proved to be an extremely reliable shooter for the Bucks at all levels with a 52.3 FG%, a 47.1 3P%, and a 74% FT%.  Although he registered a few DNPs in the playoffs against the Brooklyn Nets, his stat line remained consistent in the playoffs.

There are very few questions concerning Bobby Portis and what he’ll provide the Bucks in the 2021-22 season.  The only major question is, will he continue to shoot with the same high efficiency?  Bobby’s incredibly high shooting percentages might be difficult to replicate, especially as opposing teams guard him more closely.

Although he spent much of last season bouncing around the League, George Hill spent several seasons with the Bucks and played a key role off the bench.  The Bucks sent Hill to Oklahoma City as part of the Jrue Holiday trade prior to the 2020-21 season.  The Thunder ultimately traded Hill to the Philadelphia 76ers in March 2021.

Although Hill was a major contributor for the Bucks from 2018-2020, he appeared to have difficulties in the 2020-21 season.  George Hill is 35 years old, so is his age starting to catch up with him?  That would certainly be understandable, but the drop in production could also be due to playing for multiple teams and having to learn different systems.  Regardless of the reason for his drop off, this question remains: which George Hill are the Bucks welcoming back?

George Hill will have a bounce back season in 2021-22.  Although he won’t reach the same numbers he had in 2019-20, his experience with Coach Bud’s system and his synergy with the team will prove beneficial for him.  Stability can go a long way in bringing out the best in a player.  Hill’s age will be a factor, but finding a consistent role on a familiar team will help him shine.

Grayson Allen is a new face on the Milwaukee Bucks.  Allen was drafted by the Utah Jazz in 2018 and traded to the Memphis Grizzlies in the same year where he remained until now.  Allen has always been a controversial figure in the basketball world, going back to his college days at Duke.  A quick Google search for Grayson Allen will turn up a plethora of videos and articles about his dirty plays and immaturity.

Wisconsin Sports Heroics writer Louis Napolitano wrote an in-depth piece focusing on Allen specifically, which you can read here. I largely agree with Louis’s concerns.  Will Allen be able to remain healthy throughout the season?  He’s had issues with injuries throughout his career.  Moreover, will Allen continue to mature as a player and leave some of the antics he’s became so infamous for in the past?

The last major question relates to what his role on the team will be.  If Donte DiVincenzo is still rehabbing from his injury at the start of the season, it’s very likely Allen will start in his stead.  If Allen performs at a high level, will he be returned to the bench in favor of a healthy DiVincenzo?  Or will he remain a starter?

Allen will be a big contributor for the Bucks in the 2021-22 season.  Despite his dubious reputation, Allen can play at a very high level.  The maturity and experience on the Bucks will help Allen grow as a player and he’ll prove to be a good fit for the team.  Unfortunately, due to his past issues with injuries, it’s probable he’ll miss several games this year.

Semi Ojeleye’s main strength is his defense.  Therefore, it’s likely the Bucks will use him situationally, much like how they used PJ Tucker before Donte DiVincenzo’s injury.  Will Ojeleye be able to perform in this role at a comparable level to Tucker?

Semi Ojeleye will see limited use for the Bucks in the 2021-22 season.  He’ll mostly be used situationally in defensive-focused line-ups, much like PJ Tucker in 2020-21.  Ojeleye will not be able to defend at the same level as PJ Tucker and he may face a lot of criticism for that during the season.  Despite that, I expect that Ojeleye will be able to perform at his role well enough to make his presence felt.

Rodney Hood is another new face on the Bucks’ roster entering the 2021-22 season.  He spent last season with the Portland Trailblazers before being traded to the Toronto Raptors as part of a trade deadline deal.  Hood struggled significantly in the 2020-21 season as he failed to return to form after suffering a torn Achilles and a hip injury.

Given his difficulties returning from his injuries, the obvious question is how will Hood perform in 2021-22?  Will he be able to finally bounce back and start producing at numbers closer to his pre-injury statistics?  If he can, he can prove a valuable asset for the Milwaukee bench, but it’s a gamble.

Rodney Hood will see limited use in the 2021-22 season.  His numbers will likely improve from last season, but Bucks fans shouldn’t expect him to return to his peak form.  Budenholzer will likely use him situationally in the early season with his minutes either increasing or decreasing based on his performance.  In the end, Hood mostly seems like a back-up option in case Grayson Allen or George Hill sustains an injury.