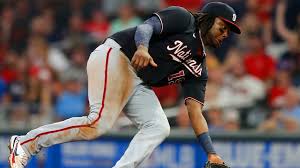 July 31st seems so far away, but for Brewers fans looking forward to the craziness of the trade deadline, it will come much quicker than expected. The Brewers figure to be contenders again in 2022 and barring major injuries, will be looking to add pieces come the trade deadline. This past week Mark Attanasio talked more about the potential for in season moves.

When discussing the free agent acquisition of Andrew McCutchen and the lockout Attanasio talked about their strategy to get one of three big pieces they were in discussions with. While Attanasio did not disclose the other two options, he did talk about how much room remained in the budget for more transactions. When speaking with reporters in Maryvale, Attanasio stated “We always leave room to do things at midseason. The team will dictate whether we look to add or not add midseason, but we always have to leave room.” With this in mind, it’s always fun to look at who could end up wearing the ball and glove logo.

While Milwaukee rarely goes out and gets the biggest names available at the trade deadline, it can be interesting to at least think about those names coming to Milwaukee. One of the major question marks surrounding the team this year is first base. This seems like one of the most logical places to go get an impact bat at this point is one of the few weaknesses on the team. 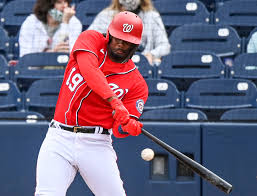 The former Pittsburgh Pirate certainly has some familiarity with American Family Field and the Milwaukee Brewers. Bell has had an up and down past few years, but with only year of club control on a rebuilding Nationals team, Bell looks to be an easy trade candidate. In 2021, Bell hit .261 with 27 home runs and 88 RBI. This kind of production would have ranked near the top for the Brewers last season. Bell, a 2019 all-star, packs a lot of power from both sides of the plate. Coming off a career best season in Washington, Bell played in 144 games and had a 3.1 WAR. Bell is a dangerous offensive weapon along with the versatility the Brewers have been known to be fond of.

While Bell played a majority of his games at first base, he also saw time in the corner outfield and DH. The Brewers have historically loved using players in a variety of positions. Recent acquisitions of versatile players have continued to play into this narrative. Bell also offers a switch hitter in the lineup. The Brewers would be able to start Bell as an everyday first basement while moving him around to give Rowdy Tellez and Keston Hiura time at first.

With a $6,500,000 price tag for 2021, the Brewers would be able to handle his contract whether they acquire him in July or earlier. Unfortunately, Bell would most likely fit the bill as a rental player as he seeks a pay day following 2022. The price tag for Bell is a major question mark as the Brewers would likely try and avoid having to part with a top end prospect. 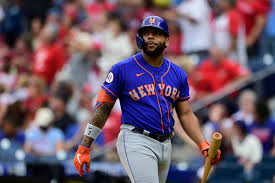 The 26 year old has found himself in a contested battle for first base in New York. Smith has worked his way up the Mets minor league system, but with Ike Davis, Robinson Cano and potentially Michael Conforto returning, his time with the Mets may be coming to an end. The lefty has had problems with strikeouts during his time in the majors, however, has shown the ability to hit the long ball and be a productive bat. In 2021, Smith hit .244 with 11 home runs and 58 RBI.

Smith brings two years of club control beyond 2022 and would be a relaitvely cheap option for Milwaukee at first. The cost to acquire Smith would likely be more than affordable for David Stearns and company as the Mets are running out of room for him on the roster. Smith figures to have a competitive market as an affordable first base option and likely would be dealt before the July 31 deadline. The question Milwaukee would have to ask themselves is if Smith is truly an upgrade from the current roster make up. 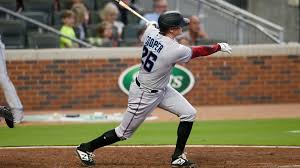 For many reasons a Garrett Cooper trade is more of a long shot. Brewers fans may recognize this name as Cooper bounced around the team’s farm system in his early days. The 31 year old was drafted by Milwaukee in 2013 before being traded to the Yankees in 2017. Miami then acquired Cooper four months later. Cooper has only played more than 100 games in the MLB once since his career began (107 games for Miami in 2019). Cooper has one more year of club control follwing the 2022 season.  In 2021, Cooper hit .284 with nine home runs through 71 games. Cooper has not had a ton of opportunities at the big league level and remains a relative unknown what he can do with a full season.

Cooper comes with the versatility factor Brewers fans have known to love as well. Splitting his time between first base and right field, the Brewers would be able to shift Cooper around. The righ handed power bat would be a nice addition to the lineup. Cooper is currently behind other former Brewers Jesus Aguilar on the Marlins depth chart. Despite this, Cooper figures to get an opportunity at DH and the outfield for Miami. If Miami is thinking of sending the veteran out for prospects, the Brewers are sure to check in. Cooper would carry an affordable price tag and could be acquired without sending a top prospect.

There are a lot of things that can happen between now and July 31, one thing is certain that Milwaukee will find a way to compete. The Brewers will be contenders and buyers in the 2022 trade market yet again.