Walk Off Heroics, Ejection Kickoff Second Half Of The Season A walk off double follows an All-Stars ejection

The Lake Country DockHounds kicked off the second half of their season Thursday evening in Kansas City. Casey Gillaspie of the Monarchs, spoiled the party, however. His double in the bottom of the ninth gave the home team a 3-2, walk off victory.

After being silenced for most of the night, the DockHounds offense came to life late in the game. Beginning in the seventh with a Tristan Carranza leadoff home run, the visitors completed the comeback in the top of the ninth on an RBI single by Lamar Briggs, tying the game at two.

In the bottom of the ninth inning, Cyrillo Watson took the mound to warm up, but was removed before throwing a single pitch. Shea Weber took his place and started off the inning with a strike out of Matt Adams. Home plate umpire, Jordan Sandberg proceeded to eject Adams for continuing to argue a called third strike.

After a single by David Thompson, Murray surrendered the game-winning double to Gillaspie that scored Thompson from first. The DockHounds pitching staff, assisted with stellar defense behind them, held one of the league’s most potent offenses in check most of the evening.

Carson Goldsmith, re-signed by Lake Country earlier in the day, got the ball to start the game. Goldsmith was solid in his first outing, going five innings and striking out seven. He showed veteran leadership on the mound by pitching out of trouble in multiple innings, surrendering only two Monarchs runs in the process.

Lake Country turned a total of four double plays to help their pitchers out. The team defense was highlighted in the third inning when right fielder Daikan Yoh threw out Monarchs right fielder, Jan Hernandez at the plate while trying to tag up and score. It turned out to be a key moment in the game as it kept the Monarchs to just a one run lead at the time.

Newcomer, Takoda Metoxen, formerly with the Lakeshore Chinooks, also pitched for the first time in a DockHounds uniform Thursday night. Coming in with one out in bottom of the seventh, Metoxen pounded the strike zone, throwing 8 of 12 pitches for strikes and working a perfect 2/3 of an inning in his debut. 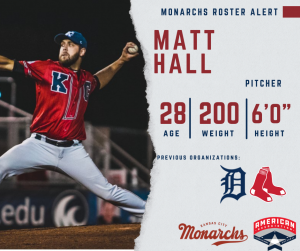 For the Monarchs, veteran pitcher Matt Hall kept the Dockhounds off the scoreboard most of the night. After two first inning singles, Hall scattered four more hits over the next five innings. He exited the game after six scoreless innings, striking out seven and walking only one.

Hall, despite the no-decision is 4-1 on the year with a 1.05 ERA in six games. He has pitched 34 innings, giving up only 24 hits, while striking out 42. Originally drafted in in the sixth round of the 2015 MLB draft, Hall has shown new life in Kansas City after a short stint with the Detroit Tigers and Boston Red Sox from 2018-2020.

These same two teams will play again tonight at Legends Field in Kansas City. First pitch is scheduled for 7pm.