Tyrone Taylor sure is making it difficult for Craig Counsell to keep him out of the lineup. The former Brewers top prospect made his first Opening Day roster this season, but struggled to get going. Over the past couple of weeks, though, he has been absolutely incredible. Today, he found himself in the starting lineup of both games between the Brewers and Cubs. After hitting a home run in the first game, he put on an absolute show in the second. Not to be overlooked, Aaron Ashby had the best start of his career.

The Milwaukee Brewers are down two starters. Brandon Woodruff and Freddy Peralta, both All-Stars last season, are on the 15-Day IL. After Ethan Small made his Major League debut in the Brewers win in Game One, Aaron Ashby got the nod to start Game Two.

Ashby came into the day with an 0-3 record and 2.91 ERA. Most of his appearances this season have come in relief, but the aforementioned injuries mean he will be starting more often. He certainly gave fans reasons to be excited about this with his effort against the Cubs. The Brewers lefty threw six innings of one run ball. He allowed five hits and a walk while striking out 12. According to stathead.com, it was the 12th time in Brewers history that a left-handed pitcher had at least 12 strikeouts.

Boxberger Gets the Brewers Out of a Jam 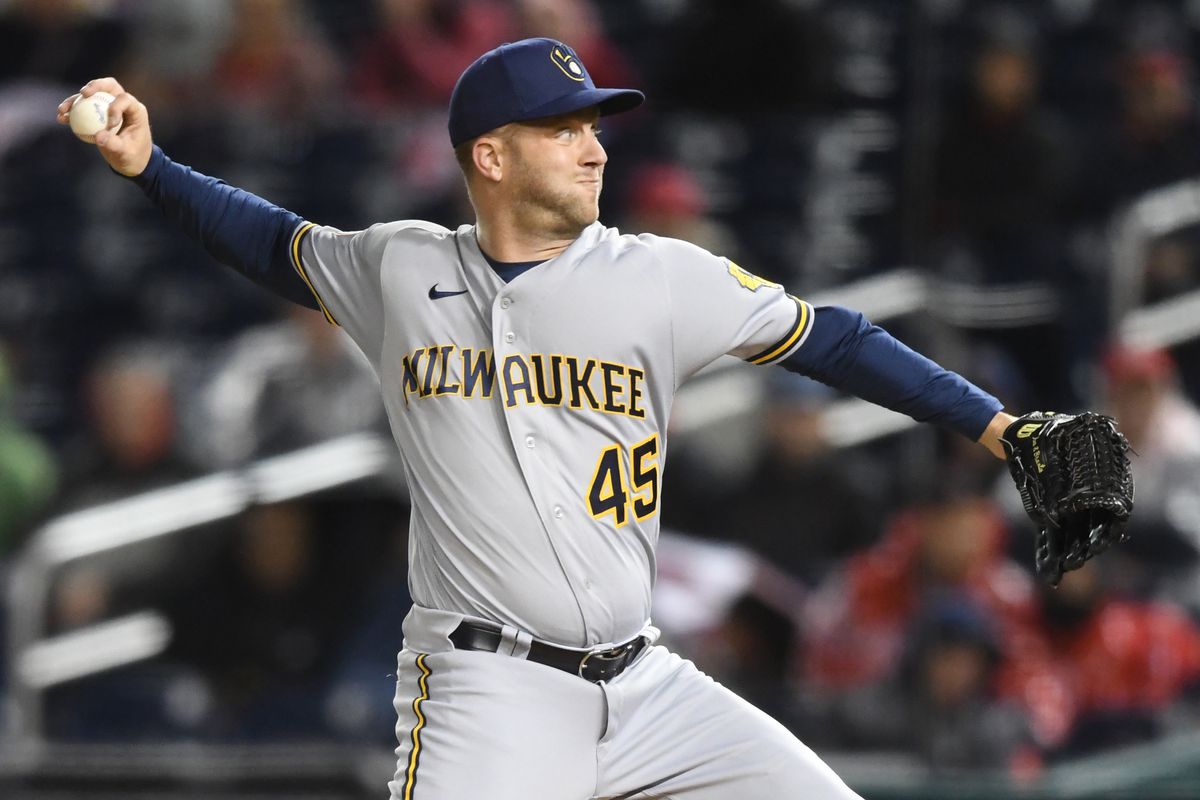 Aaron Ashby ran into some trouble in the seventh inning. The Chicago Cubs had three lightly hit balls escape defenders to load the bases. Since Ashby had thrown 100 pitches at that point, Counsell pulled him in favor of Brad Boxberger.

The Brewers’ reliever has struggled with inherited runners this season. That was not the case tonight, though. Boxberger struck out the first batter he faced. Then, he induced an inning-ending double play. It was an unconventional 6-2-3 double play, too.

Boxberger came back out to pitch the eighth inning. He allowed a hit, but struck out another batter in a scoreless frame.

As mentioned previously, Tyrone Taylor put on a show in Game Two. After hitting a home run in Game One, Taylor made what could be the catch of the year to end the sixth inning in Game Two.

Tyrone Taylor can not be serious with this catch! 😲😲😲 pic.twitter.com/d6OXFxOh5d

Taylor followed that catch with an insurance solo home run in the eighth inning.

So is this just The Tyrone Taylor Game? 😤😤#ThisIsMyCrew pic.twitter.com/vWsMkWslNi

Josh Hader is having, arguably, the best season by a closer in the history of baseball. Not only did he notch a save in Game One, he came in again in the ninth inning of Game Two to earn his 18th save. He extended his Major League record by recording a save in his 18th straight appearance.

Two saves in one day is not a common achievement. In fact, it was just the eighth time that it has occurred in franchise history.

From @EliasSports, multiple saves by a Brewers pitcher on the same day: