The Green Bay Packers are in a situation that they have not been in in quite some time in the Aaron Rodgers era. The team is currently on a three game losing streak and take on the Buffalo Bills Sunday night showdown. All signs are pointing towards a fourth straight loss for the defending NFC North champions. It is very hard to get excited for this game seeing that fans have not seen the Packers play this poorly since the 2018 season. Time is truly running out for the offense to gets things rolling. Will we see a drastic improvement from Aaron Rodgers and company? Let’s take a look at three things we will see on Sunday night: 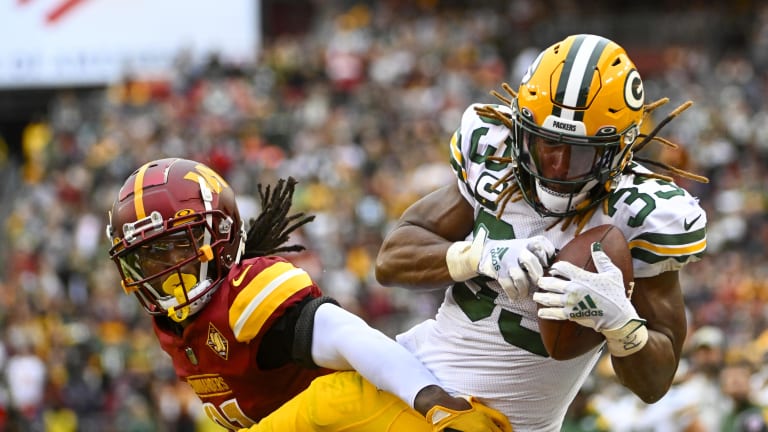 There is no secret behind it: Aaron Jones is the best offensive weapon on this roster. Unfortunately, the game plans by Matt Lafleur are not showing that, nor revolving around it . This needs to change going forward for the rest of the season. Jones showed his versatility last Sunday against Washington by recording both receiving touchdowns from Aaron Rodgers. This is something that is clearly frustrating fans, and Jones himself. I sincerely hope that Matt Lafleur, Adam Stenavich, and Aaron Rodgers took note of Jones’ performance and hope to carry forward with it. With an extremely injury-riddled and inexperienced receiving core, Aaron Rodgers is going to need to depend on Aaron Jones a ton until things start looking better for the wide receivers. I am expecting a heavy dose of Aaron Jones Sunday night, and I do think that this will be our best chance to win.

Josh Allen Throws For Over 400 Yards and Four Touchdowns

This should not come as a surprise to anyone.  Josh Allen is the best quarterback in the NFL, and he is going to prove it on Sunday night. The Packers’ defense has been pretty good against the pass this season. But, there has not been a stellar or elite quarterback that the defense has had to prepare for. Back in week one, Green Bay’s defense gave up 184 yards to Justin Jefferson alone. The Buffalo Bills have Stefon Diggs, who is a former Viking, and is  a top five receiver in the NFL. I do not believe Joe Barry will give up the same amount of yards. However, I would not be surprised to see it close to that number. Josh Allen also has weapons in Gabriel Davis, Dawson Knox, and Isaiah McKenzie. This is going to be overwhelming for the defense in my opinion.  In the end, I do not think there is a solid game plan to slow down Josh Allen from taking this game over early and often.

Needless to say, there is not much to look forward to on Sunday night. The Packers need a win to get things back on track after they blew opportunities against the Giants, Jets, and Commanders. Going against the AFC’s top team surely does not help. Even if Green Bay had a 5-2  record, I would not predict them to beat the Buffalo Bills. Things are not looking good as the Packers will be without Randall Cobb and potentially Allen Lazard. This will force players like Sammy Watkins and Romeo Doubs to step up greatly. There are just too many factors going against Green Bay and they will need to go back to the drawing board come next Sunday against Detroit.