This Trade Involves Rajon Rondo to the Bucks The Milwaukee Bucks signed DJ Augustin this offseason to backup Jrue Holiday at the point guard position.  Holiday, though, is not a natural point guard, which makes Augustin the lone pure point guard on the roster.  Needless to say, the signing has not looked to be the best, though the season is only halfway over.  He may improve, but after signing a three-year contract, frustrations with his play are high.  This trade, which involves Augustin, would add veteran Rajon Rondo to the Bucks’ roster.

A Trade Between Milwaukee and Atlanta

This trade would not require a third team.  To make the salaries work, the Bucks would include an additional player along with Augustin:

How This Trade Benefits the Bucks 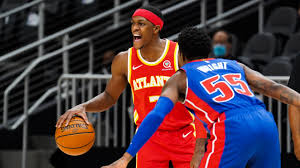 The Bucks would benefit from this trade in four ways.  First, adding Rajon Rondo would provide the Bucks with a true point guard to backup Holiday.  Though Rondo is not the player he was with Boston, he is still a great passer and can set up Giannis for easy baskets.  He does not shoot threes (or at all) very often, but currently is posting a career best 38.2% from beyond the arc.  Augustin does boast better points and assists per game averages than Rondo this season, but is also playing nearly five more minutes per game.  If Rondo was getting the playing time Augustin did, he would surly surpass him in production.

Secondly, in trading for Rondo would add a veteran who has won multiple NBA Championships.  The Bucks have infamously fallen short of Finals appearances in each of the past two seasons.  While Rondo’s actual play may not be the deciding factor that gets them their, his leadership in the locker room could have a profound effect on Bucks’ players who have not reached that point.

Third, Rajon Rondo is under contract for just two seasons, including this one.  As mentioned previously, the Bucks signed DJ Augustin to a three-year contract.  Based on his play this year, this contract could end up being very bad for the cap-conscious Bucks in the very near future.  Rondo may make more per season, but his contract will be up a full year before Augustin’s.

Finally, this trade would save the Bucks $3.7 million in salary cap space this year.  This would give them the flexibility to sign another veteran off of waivers who could have a big role in a playoff push later in the season.  Additionally, this means they will have more cap space to work with next offseason when they can add more pieces to their roster.