The Milwaukee Brewers currently stand in first place in the NL Central. An impressive 16 games over .500, the Brewers really are on top of the world. While it might sound crazy, the Brewers can really contribute a big portion of their success to the starting rotation.

The Brewers’ pitching has always had some sort of success in either one or two players over the years, but seeing it thrive the way it is? Really unheard of for the crew. While the pitching stays hot, the offense is finally providing the run support the pitchers have been looking for.

There’s always been that topic of discussion on who will come out on top for the starting rotation. Usually talks of who will be the 1 and 2 spots and carry the team to success into the postseason. For the Brewers, Brandon Woodruff, Corbin Burnes, and Freddy Peralta have been the stars of the game. 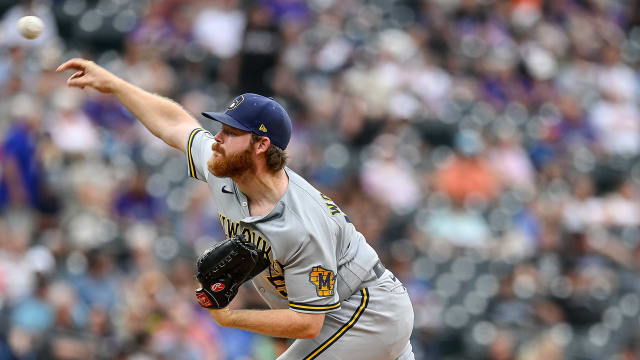 The “Opening Day Curse” was always something that lingered with the Milwaukee Brewers. It hadn’t been since 2014 with Yovani Gallardo that the Brewers had a starter make back-to-back Opening Day starts. Brandon Woodruff would get the call again in 2021 and put that curse to an end.

Looking at his success, it really doesn’t surprise many. Woodruff has solidified his role as the Brewers’ ace last season in his 13 starts. He recorded an ERA of 3.05, with 91 punch outs and a WHIP of 0.991.

Breaking down Woody’s success, the righty has an impressive five-pitch arsenal. In his 16 games started this season, we see him throwing the 4-seam fastball 34.2 percent, the sinker 28 percent, the curveball 13.7 percent, the change up 13 percent, and the slider only 11 percent of the time. While he throws his fastball the most, there’s more success with the sinker and getting that pitch into the strike zone. 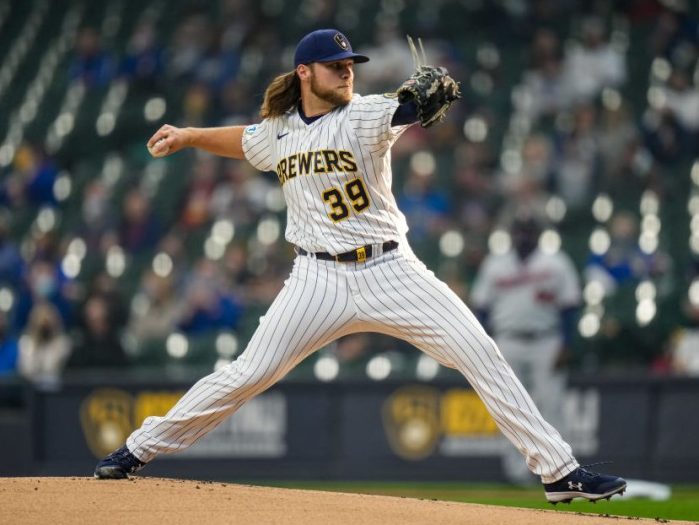 If the season were to end today and a Cy Young Award winner had to be picked, the award should definitely go to Corbin Burnes. Burnes has had a tremendous 2021 season so far and has solidified himself as one of the best pitchers in the league.

While Burnes didn’t really have the 2019 season he was looking for, going into 2020 and 2021, he spent a lot of time in the pitching lab working his arsenal. In 2020, he started to rely on the sinker and cutter, throwing the sinker 30.8 percent and the cutter at 29.7 percent. Making that switch helped Burnes become a force. While he finished sixth in the Cy Young voting last season, he had an ERA of 2.11 with 88 strikeouts and only walked 24. Considerations should be made for this season when talking about who should be in the Cy Young Award discussion.

Burnes has made 2021 his year, making history in many ways. He holds the franchise record for consecutive starts of five+ innings where one ER or less was earned. Not only that, he made MLB history beginning the season striking out 58 batters before he allowed his first walk. Limiting those walks and enhancing the strikeouts has been a huge deal to Burnes’ success on the mound. He currently has a 4-4 record with a 2.41 ERA, 120 strikeouts and just 15 walks.

Looking back on a year ago, even two years ago, saying Freddy Peralta would be one of the best pitchers in the National League wouldn’t have been said. However, Peralta made his debut on Mother’s day in 2018 at just 21-years-old; In his debut, he racked up an impressive 13 strikeouts and allowed just one hit in a little over five innings of work.

Peralta bounced back and forth from the starting rotation to the bullpen. But after a strong start in spring training of this year, Peralta sealed his spot in the rotation. This season, fans have seen Peralta come to the mound with a four-pitch arsenal. While he’s still throwing the fastball 54.2% of the time, he has also introduced a slider in which he’s pitching about 27.1 percent and a curveball (8.7 percent). He sits with a 7-2 record and an ERA of 2.17 with 122 strikeouts.

A Birthday Gift to Remember

On his birthday (June 4) this year, Peralta nearly threw a no-hitter against the Arizona Diamondbacks. The pitcher went eight innings before he allowed a hit and grabbed his sixth win of the season. At the time of this game, Peralta had gone four starts of at least five innings and only allowed one hit. No Brewers pitcher had done that to date.

The crew signed Freddy Peralta to a five-year, $15.5M contract extension last season and is emerging as a star. This truly has been a breakout season for Peralta.

Aside from Burnes, Peralta and Woodruff could also be in the Cy Young Award conversation. All three have put outstanding numbers out there to keep the Brewers on the top. While we’re only 81 games into the season, it’s safe to say that the Brewers have three of the best starting pitchers in all of baseball.