Orlando Arcia of the Milwaukee Brewers celebrates with teammates after driving in the game winning run during the tenth inning against the Minnesota Twins on Opening Day at American Family Field on April 01, 2021 in Milwaukee, Wisconsin. (Photo by Stacy Revere/Getty Images)
Share
Facebook Twitter LinkedIn Pinterest Email

Opening Day 2021 has come and gone.  The Milwaukee Brewers and, perhaps more importantly, their fans returned to Milwaukee for a full season of baseball.  Memories were made and normalcy, it seems, returned (at least a little).  But more on that later.  As the Brewers embark on the long road to a fourth-straight postseason berth, we reflect on the five more memorable Opening Day games in franchise history.

The year was 1980 and the Milwaukee Brewers faced the Boston Red Sox to begin their season.  What followed was an all-out slugfest that saw the two teams combine for seven home runs.  Five of these came off the bats of the Brewers.

The Red Sox two home runs came off the bats of Yastrzemski and right fielder Butch Hobson.  The home runs could not have been more timely for the Sox.  Trailing 5-3 in the ninth inning, the pair hit two solo home runs off of Brewers’ starter Jim Slaton.  Reggie Cleveland came in to relieve Slaton and kept the Sox off the board for the rest of the inning.

The Brewers’ offense was on point for much of the game.  Ben Oglivie, Paul Molitor, Don Money, and Sixto Lezcano each hit home runs in the game, accounting for the Brewers’ five runs entering the ninth.

After the score was tied, Molitor, Oglivie, and Gorman Thomas each got on base.  The bases were loaded with two outs when Lezcano stepped up to the plate.  He then launched a walk-off grand slam off of reliever Dick Drago to give the Brewers the win.  Drago is the same pitcher who gave up Hank Aaron’s 755th home run four years previously.

This win was improbable given that the Brewers were without their manager and hitting coach.  Buck Rodgers served as interim manager while manager George Bamberger recovered from heart surgery.  Hitting coach (and future manager) Harvey Kuenn was recovering from having his leg amputated.

The Brewers opened the 2019 season full of high hopes and expectations.  The year previously, they had come within one game of the World Series.  Full of confidence, they took on the hated St. Louis Cardinals.

In the fifth inning, Brewers’ starter Jhoulys Chacin hit an unexpected solo shot to give the Brewers a 5-3 lead.  It was a good thing, too, because Kolten Wong added a second home run, a solo shot, in the seventh against Junior Guerra.

The score stood at 5-4 as the ninth inning began.  Josh Hader came in to close the door and recorded two quick outs.  Jose Martinez, a right-hander, was brought in to pinch-hit for Wong and he launched a 1-0 pitch that was headed out of the park.  However, Lorenzo Cain, who would in the Gold Glove in center field that season, robbed him with a leaping catch at the wall to seal the win for the Brewers.

Yesterday, the Milwaukee Brewers welcome over 11,000 fans to the ballpark for the first time since 2019.  Due to the COVID-19 pandemic, baseball was played without fans in the stands in 2020, and the players sure seemed to enjoy having them back.

Josh Hader, who got the win yesterday, touched 100 mph on the radar gun and credited the fans for giving him an extra boost of adrenaline.  It was a slow-go out of the gate, but the Brewers provided their fans with yet another memorable Opening Day.

The Brewers are facing the Minnesota Twins in a rare interleague opening series. After they fell behind 2-0 early after a wild pitch by Brandon Woodruff.  They got a run back in the bottom half of the second when Wong scored on a bases-loaded walk by Travis Shaw.  The Twins, however, added a run in the fourth and Omar Narvaez drove in a run in the fifth.

Twins’ outfielder Byron Buxton, though, seemed to kill Brewers’ fans hopes of a comeback when he smashed a two-run shot of Eric Yardley in the seventh.  However, the Brewers would not let their fans down after such a long absence.

Trailing 5-2, Christian Yelich singled in Kolten Wong after the Twins botched a Keston Huira grounder that could have ended the game.  After another Twins’ mishap on an Avisail Garcia grounder that advanced Huira and Yelich, Travis Shaw hit a double to right-center to tie the game.

Josh Hader struck out the side in the top of the tenth, stranding the Twins automatic runner.  Lorenzo Cain started the tenth on second base and moved to third on a Narvaez single.  Orlando Arcia hit a slow roller to second and the throw home was not in time as Cain slid in head-first.  The walk-off fielder’s choice grounder was the Brewers third Opening Day walk-off win in team history.  What a way to welcome back fans!

In 2013, the Milwaukee Brewers opened their season against future Brewer Jhoulys Chacin and the Colorado Rockies.  The Rockies took a 2-0 lead in the third inning off of a Troy Tulowitski home run.  The Brewers responded with a run in the bottom half of the inning when Nori Aoki hit a solo home run.

The Rockies took a 3-1 lead in the fifth when Carlos Gonzalez crushed a solo shot off of Yovanni Gallardo.  Later, in the eighth, the Brewers took a 4-3 lead after back-to-back RBI hits from Ryan Braun and Aramis Ramirez.

In the ninth inning, Dexter Fowler hit a solo home run off of closer John Axford to tie the game.  The Brewers could not answer in the bottom of the inning, and the game went to extra innings.  After holding the Rockies scoreless in the top of the tenth, the Brewers walked it off in the most unlikely of ways.

After Aoki struck out to lead off the inning, Rickie Weeks got on base after being hit by a pitch.  Weeks then stole second, prompting the Rockies to intentionally walk Braun.  Ramirez then drew an unintentional walk to load the bases for Jonathan Lucroy.  Luc lifted an 0-1 flyball deep to center field where it was caught.  However, it was deep enough for the speedy Weeks to scamper home from third.  It was the Brewers’ second walk-off on Opening Day and first in extra innings. 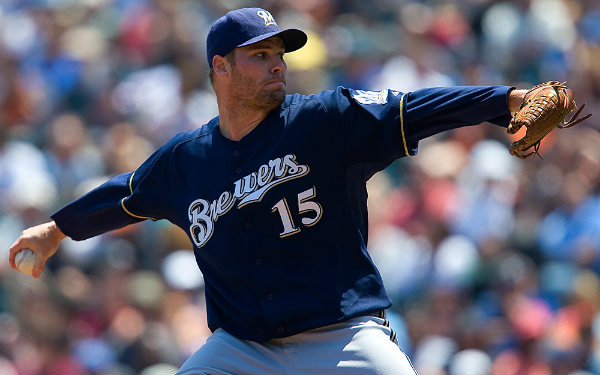 Ben Sheets kicked off his third All-Star season by throwing a complete game against the Los Angeles Dodgers on April 2, 2007.  He struck out just three, a low count for Sheets.  However, he was efficient as ever, giving up just one run on two hits and no walks.

The Brewers were in control the entire game.  After a 1-2-3 inning at the top of the first, the Brewers grabbed the lead in the bottom half of the inning on a Bill Hall RBI ground out.  Jeff Kent tied the game 1-1 in the top of the second on a solo home run, but that would be the extent of the damage the Dodgers could muster.

JJ Hardy gave the Brewers the lead in the bottom of the second with a RBI single.  Current Manager Craig Counsell hit a sac fly that scored Johnny Estrada in the third, which made the score 3-1.  In the fourth inning, the Brewers added three more runs off of Dodger starter Derek Lowe.  JJ Hardy walked with one out, and Prince Fielder followed with a single.  After a Bill Hall strikeout, Estrada singled Hardy home.  Geoff Jenkins followed with a two-out two-RBI double to make the score 6-1.

Bill Hall added a solo home run in sixth, making the score 7-1, which would be the final score.  All through this offensive barrage, Ben Sheets mowed through the Dodgers order, at one time retiring 14 in a row.