Former Wisconsin Badger Sam Dekker is making noise in his return the NBA. Currently a member of the Toronto Raptors, Dekker is hoping to reach the biggest stage in professional basketball.

Sam Dekker was the 18th overall pick in the 2015 NBA draft, After dominating Wisconsin high school basketball from 2008-2012, Dekker played his college basketball at Wisconsin. The home town kid was living his dream.

I am the same age as Sam Dekker. I was at the Kohl Center for his game winning shot that won Sheboygan Lutheran the 2012 WIAA Division 5 state title. As a result, it’s still one of the coolest moments every in Wisconsin high school basketball history.

After playing three years at Wisconsin, Dekker scored over 1,000 points and was a part of two final four teams. As we know, his junior year in 2015, he helped lead the Badgers to the 2015 National Championship game, but ultimately falling to Duke. It wasn’t surprising to see Sam go pro. He earned it and deserved it.

After Dekker was drafted by the Houston Rockets, he did spend some time in the G-League and with the professional team. After spending his first two seasons in Houston, he was a part of the Chris Paul deal and was traded to the Los Angeles Clippers, where he spent the 2017-2018 season.

In the 2018-2019 season, Dekker spent time with the Cleveland Cavaliers and Washington Wizards. In 200 career games, Dekker has averaged 15.5 minutes per game and 5.5 points per game.

Dekker has spent the last few seasons playing overseas in Russia and Turkey. In the limited clips I’ve seen over that time, it’s clear Dekker has found some success and his play has looked really good. As a fan of Sam Dekker, I was really encouraged to see him play at a high level and with confidence. Because of this, I was hoping it would only be a matter of time until we saw him in the NBA again.

He’s most definitely a candidate for making his way back on an NBA Roster next year. pic.twitter.com/tWwXDeDSlk

Dekker Makes His Way Back To The NBA 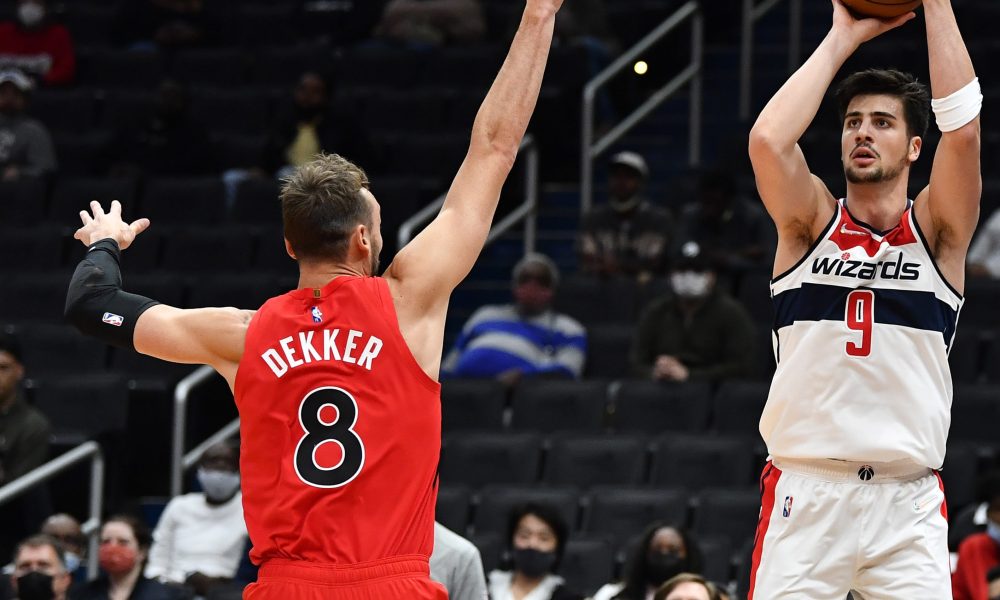 On August 10, 2021, Dekker signed a deal with the Toronto Raptors. It’s been great to see Sam back on an NBA court, where I believe he belongs and where’s he’s going to stay.

In last night’s NBA pre-season game, the Raptors beat the Washington Wizards 113-108. Dekker had a monster game. He scored 18 points, was 7-10 from the field, and 4-5 from the three point line. He did this in only 16 minutes of action.

Sam Dekker had himself a game last night. Poured in 18 points on 7-10 shooting (3-4 from deep) in just 16 minutes. Making the most of his return to the NBA. #Badgers
pic.twitter.com/uASbq7omVx

I’m seeing a very confident Dekker in this clip and the clips I’ve seen. Because of this, I believe Dekker has the chance to make the Raptors roster and play a role this year and for the remainder of his NBA career. I hope the former Badger stud, small town kid from Sheboygan, and home state kid gets to stay in the league as long as his playing career lets him.

🎯 • 7 different coaching staffs in 7 years – 3 trades – 2 years overseas – online BS etc. A lot of “why me” moments but it’s made me grow up and face whatever comes my way with the right mindset. There will always be another hill to climb! https://t.co/tMSIlskiQ2

We’re rooting for you, Sam!