The Green Bay Packers are set to take on the Philadelphia Eagles on Sunday.  The Packers are looking to string together back-to-back wins after a 41-25 thumping of the Bears last week.  The Eagles, on the other hand, are looking to get back into the playoff picture in the poor NFC East.  The 8-3 Packers are favored by 8.5 points over the 3-7-1 Eagles.  Fans will recall that one of the Packers losses last season came at the hands of this Eagles team at Lambeau Field.  Therefore, the Packers will be looking to redeem themselves this year in Philadelphia.  Here, we give you three X-Factors that can potentially lead the Packers to victory. 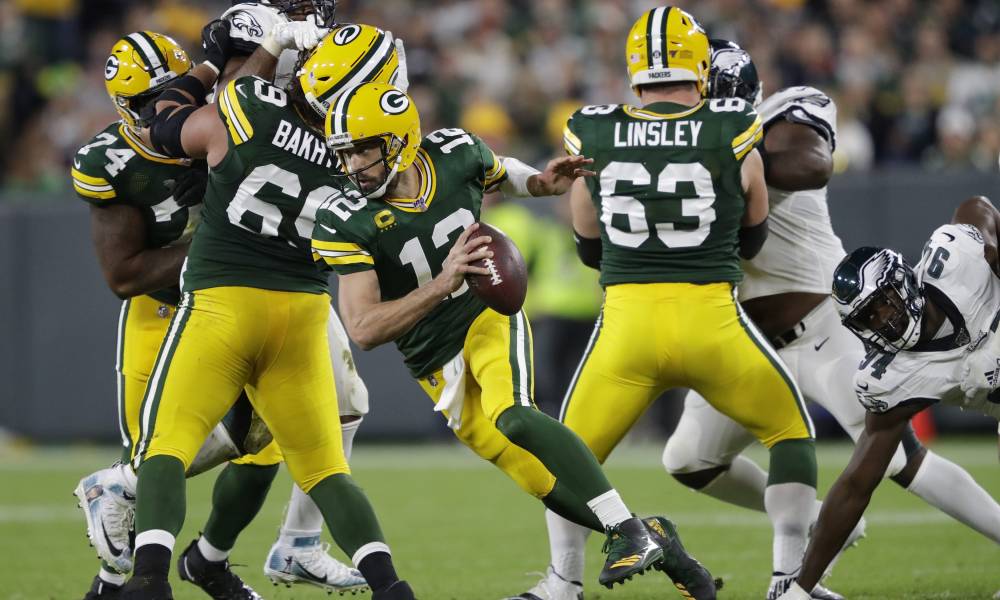 The Philadelphia Eagles’ offensive line has been the worst in the NFL this year in terms of allowing defenses to reach the quarterback.  Quarterback Carson Wentz has been sacked a staggering 46 time so far this year.  The Packers’ defense, thus far, has recorded 24 sacks on the season, which ranks 16th in the NFL.  If Kenny Clark, Za’Darrius Smith, Preston Smith, and Rashan Gary can win their one-on-one matchup against the worst offensive line in the league, Carson Wentz and the Eagles’ offense could be in for a very long day.

The Eagles’ defensive line, on the other hand, has been among the best in the league.  The Eagles’ defense has recorded 36 sacks, which ranks second in the league, only behind the Pittsburgh Steelers.  The Packers offensive line has allowed the second fewest sacks in the NFL this year (12), also only behind the Steelers.  Fletcher Cox, the Eagles’ star pass rusher, is listed as questionable with a neck injury.  If he is able to play, the Packers offensive line will be hard-pressed to contain him.  Even if he does not play, or is limited, the Eagles defensive line should not be taken lightly.

With Corey Linsley out with a knee injury, the depth of the Packers’ offensive line will be one of the most important X-Factors once again.  The good news for the Packers is that everyone on the depth chart has stepped up and has played well.  In any case, the line battles on both sides of the ball will be fun to watch.

It seems obvious to say that the team that turns over the ball the least will most likely win the game.  However, this is a battle that is one of the most important X-Factors in this game.  The Packers are currently 11th in the NFL with a +3 turnover margin.  The Eagles, on the other hand, have the third worst turnover margin with -10.  Carson Wentz leads the NFL with 15 interceptions and the team has put the ball on the ground six times.  Their 21 total turnovers are the third most in the league.  The Packers have only turned the ball over nine times, the third fewest in the league.

In last week’s game against the Bears, the Packers forced three turnovers, including a fumble that was returned for a touchdown.  If they defense can put pressure on Wentz, he will force some throws, creating opportunities for the Packers’ secondary to snag some interceptions.

It is worth noting that when the Eagles beat the Packers last season, they committed no turnovers.  The Packers, though, turned the ball over twice.

The Packers’ defense is currently 14th in the NFL allowing 114.4 rushing yards a game.  The Eagles offense is ranked 13th in the NFL averaged 116.2 rushing yards per game.  Last season, though, the Eagles were able to defeat the Packers by rushing the ball 33 times for 176 yards and two touchdowns.  Given the struggles that Wentz and the Eagles’ passing game has had this year, they will surly try to run the ball given the Packers’ struggles in stopping the run.

If the Packers can contain the Eagles’ running backs, it will force the Eagles to rely on Carson Wentz, which does not sound as threatening as it did three or four years ago.  The Eagles’ leading rusher is Miles Sanders.  He has 600 yards so far this season and is averaging 5.6 yards per carry.  Containing him is going to be one of the most important X-Factors to the Packers’ success on Sunday.