The 2021 NFL draft is only two weeks away. Here at Wisconsin Sports Heroics, we have covered many of the needs, targets and desires for the Green Bay Packers. I am here to give you three potential first round targets for the Packers at pick number 29. The Packers went 13-3, but lost in the NFC Championship in 2020. They still have needs to fill in the roster to get them over the conference championship hump. Offensive line, Cornerback and wide receiver are some of the biggest holes on the roster leading into the draft. Let’s take a look at few who can help in those areas in the first round. 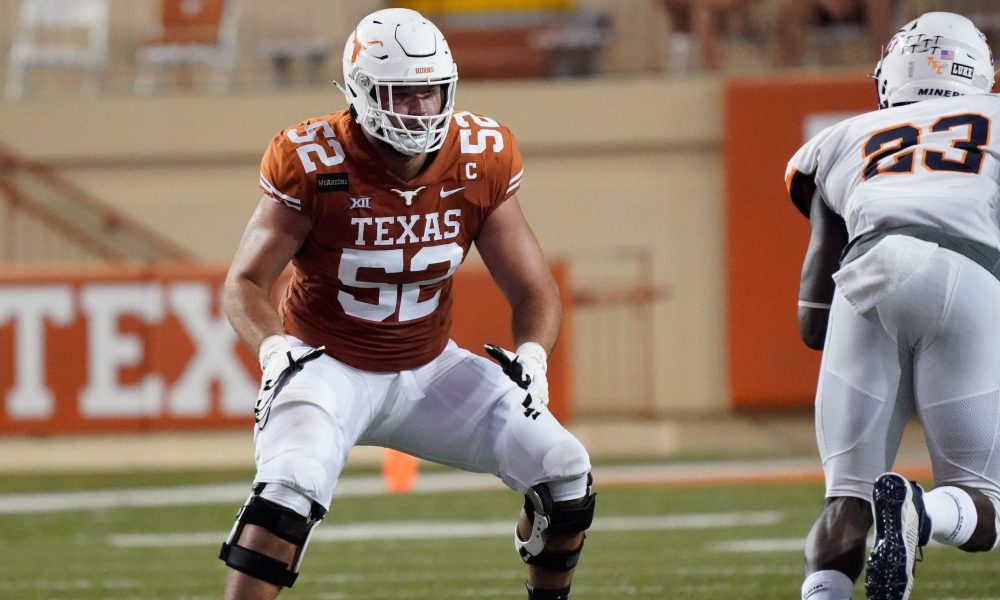 Samuel Cosmi is a right tackle out of the university of Texas. Cosmi started 34 out of the 35 games for the Longhorns in his 3-year career. He split his duties while at Texas between left tackle and right tackle, starting 14 games one the right side and 21 on the left side. The Draft Network ranks him the 53rd overall prospect, and the 8th tackle prospect. Cosmi is someone the Packers can absolutely get at 29 overall. Being ranked the 53rd overall prospect, 29th seems a bit of a reach, but Cosmi will most likely not b there at 62 overall. The top 5-6 tackles will most likely be off the board by 29, so the Packers will need to make decisions on where they value the tackle position for the future.

Cosmi would fit in the Lafleur zone scheme as that is the system Texas ran while Cosmi was there. He would slide into the Packers offensive line nicely as a swing tackle who can play both sides of the line. Cosmi would not be expected to start immediately and would be a future project on the right side after Billy Turner exits.

Rashod Bateman’s stock has soared since his explosive pro day. A month ago, Bateman was a borderline 1st round pick. Recently, The Draft Network ranked him the 20th overall prospect. There is a chance Bateman could fall to the Packers at 29, but the better odds would be the Packers moving up closer to 20 to get a weapon like Bateman. Bateman has prototypical size the Packers like, 6’1” with a long wingspan. He posted a sub 4.40 40-time at his pro day. While unofficial, it is still impressive for a player his size.

Bateman would fit in nicely opposite Adams and allow players like Lazard, MVS and St. Brown to rotate in the slot. Bateman would also be effective in the slot, where he thrived while at the university of Minnesota.

Caleb Farley is the opposite of Bateman. While Bateman’s stock is rising, Farley’s stock is falling. A month ago, Farley was in the conversation as the top corner prospect in the draft. Recent injury concerns have come up that has caused his draft stock to fall. The Draft Network still ranks him as the 7th overall prospect, and based off traits and play alone, that is accurate. Injuries scare teams that cause players to fall. In many mock drafts, Farley is falling to the bottom of the first round, a perfect landing spot for the Packers.

Farley excelled at Virginia Tech in 2019 after transitioning from wide receiver. He opted out of the 2020 season due to Covid-19 concerns. While he is better suited in man-to-man coverage, he has the ability to play both man and zone in certain schemes. With Kevin King returning on a one-year deal, Farley would not be expected to start outside immediately and can transition to the NFL game slowly and eventually be the outside corner opposite Jaire Alexander.