Ever since Davante Adams was traded to the Las Vegas Raiders, the focus of the offseason among most fans has been adding depth to the wide receiver position. Of course, this is a position of great need. Marquez Valdes-Scantling signed with the Kansas City Chiefs, too. However, it is not the only position of need. Za’Darius Smith was a cap casualty and signed with the Minnesota Vikings. Mercilus Whitney retired after a very short stint with Green Bay. While both players were not on the field much last season, their departures shine a spotlight on the lack of depth at edge rusher. Preston Smith signed an extension and Rashan Gary is still on his rookie deal. However, beyond them, there is not much depth. Kenneth Teape of NFL Analysis Network has named former All-Pro Justin Houston as potential free agent target for the Packers.

Justin Houston Was Once the Best in the NFL 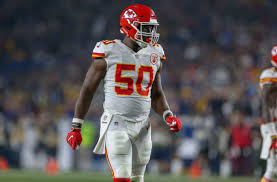 Justin Houston was drafted by the Kansas City Chiefs in the third round of the 2011 NFL Draft. He likely would have been picked earlier, but he failed a drug test at the NFL combine. He had tested positive for marijuana. Despite falling in the draft, it was not long before Houston made a name for himself in the NFL.

In 2012, his second year in the league, he had 10.0 sacks and made his first Pro Bowl. The next season, he had 11.0 sacks and made another Pro Bowl, but the best was yet to come. In his third season, Houston had 22 sacks, the second most in a season in NFL history. He was named to his third straight Pro Bowl and was a First Team All-Pro.

In 2015, his fourth season, Justin Houston was limited to just 11 games due to injury. Despite this, he still had 7.5 sacks and was named to the Pro Bowl for the fourth straight season.

Following the 2018 season, Justin Houston was released by the Kansas City Chiefs. He signed on with the Indianapolis Colts and had his best season in years in 2019. That year, he played in all 16 games and had 11.0 sacks, including his first safety since 2012. In 2020, Houston had another solid season, totaling 8.0 sacks. Two of these were safeties.

Justin Houston spent 2021 with the Baltimore Ravens, but did not see the same success that he had in the past. In 15 games, he registered 4.5 sacks. However, he also had 17 quarterback hits, up from 12 in 2020.

As mentioned previously, the Green Bay Packers lack depth at edge. Preston Smith and Rashan Gary are a great one-two punch; however, there needs to be solid backup options available. At this point in his career, Justin Houston will not be seeking a long-term deal, nor will any contract he sign be very expensive. This is perfect for the cap-conscious Packers, who are in need of depth. It would be a win-win situation.