The Green Bay Packers have the 29th pick in the upcoming NFL Draft. The team has many needs that need to be addressed in the draft including cornerback, wide receiver, and linebacker.  If the Packers decide to use their first round pick on a linebacker, their main target may be Jeremiah Owusu-Koramoah out of Notre Dame. The Packers’ new defensive coordinator, Joe Barry, is known for his work with young linebackers.  In Owusu-Koramorah, he would have the young talent to develop and turn into star-level production in Green Bay.

Jeremiah Owusu-Koramoah is one of the best linebackers in this year’s draft.  He was the NCAA’s 2020 Dick Butkus Award winner.  This award is given to the nation’s top linebacker.  In addition, he was the ACC Defensive Player of the Year and a Consensus All-American in 2020.

In his junior season at Notre Dame, Owusu-Koramoah racked up 80 tackles.  13.5 of those tackles were tackles for loss and included 5.5 sacks.  Last season, his senior year, he had 62 tackles, 11 of which were for a loss and included 1.5 sacks.

If one had to choose one word to describe Jeremiah Owusu-Koramoah, it would be “explosive.”  As a linebacker, he has demonstrated great speed and movement.  This has allowed him to cover the field from sideline to sideline effectively.  He has great instincts and finds the ball in run defense.  In college, he forced five fumbles, indicating that he is hard hitter.

Owusu-Koramoah is also an above-average defender in the passing game.  He is able to use his speed to keep up with receivers and running backs over the middle.  Last season, he had an interception and three passes defended in 12 games.  In fact, some scouts say he has the best passing coverage skills of any linebacker in this draft class.

Where Owusu-Koramoah needs to improve is in his size.  He weighs just 215 pounds, which is not the ideal weight of an NFL linebacker.  This is, of course, well within his control and he undoubtedly put on weight before the start of the NFL season.

How Jeremiah Owusu-Koramoah Would Fit on the Packers 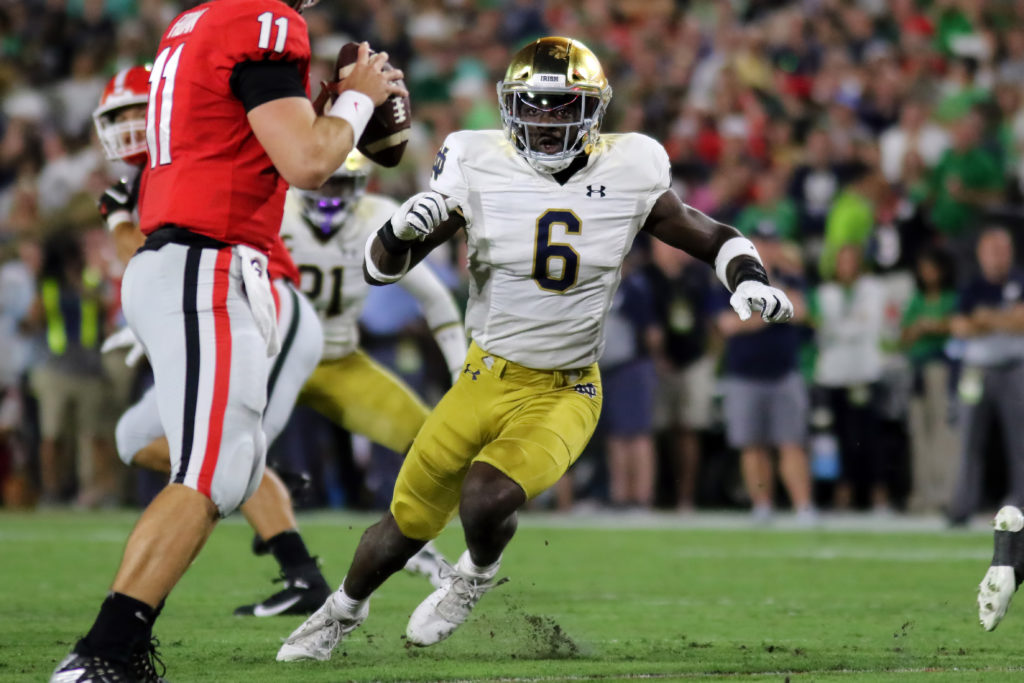 The Packers have not had an explosive linebacker since the prime days of Clay Matthews.  While Owusu-Koramoah may not play outside like Matthews, his speed and hard-hitting tendencies could make him a better version of AJ Hawk.

The Packers have two young inside linebackers in Kamal Martin and Krys Barnes.  They had some bright moments last season, but there is still room for improvement.  In addition, Joe Barry, as mentioned previously, is a linebacker savant and has done extremely well in developing young linebackers in the past.

Given the Packers’ weaknesses in pass defense over the middle and the need for better run defense, select Owusu-Koramoah would make a ton of sense.  Literally, the only detriment to his game is his weight, which can easily be added on given the right dietary plan.  If he is available at pick 29, the Packers would be wise to take him.