Marquette (19-12) received a 9-seed in the South Regional on Selection Sunday after being picked to finish 9th in the Big East in the preseason poll. Marquette faces No. 8 seed North Carolina (24-9) on Thursday in Fort Worth, Texas.

#MUBB will face North Carolina at 3:30 p.m. CT on Thursday on TBS with @BAndersonPxP, Jim Jackson and Allie LaForce on the broadcast. @ESPNMilwaukee continues its season-long coverage with @espnhomer and @AnalystTSmith34 pic.twitter.com/ObxmrbTB6L

What do you need to know about the matchup with the Tar Heels? Let’s take a look:

Marquette made a coaching change going winless in the NCAA Tournament under Steve Wojciehowski. The Golden Eagles made an exciting hire in Shaka Smart after the 2021 season. Now, Marquette eyes it’s first tournament victory since 2013. It has been the same amount of time for Smart. Smart’s last tournament win was with Virginia Commonwealth University in 2013. He lost his final two NCAA games at VCU and had three more appearances at Texas in six years. He was 0-3 at Texas.  While it is an accomplishment leading MU back to the NCAA Tournament, both Smart and the program hope to snap a long stretch without a tourney win.

REGION OF BRANDING (EAST) NUGGET: Marquette's matchup with North Carolina in the Round of 64 is a rematch of the 1977 national title game, which was also Al McGuire's last game as Marquette's head coach.

A couple factors in this game stand out for Marquette. The Golden Eagles have had a season-long issue rebounding the ball. North Carolina is a strong rebounding team led by double-double machine Armando Bacot. Bacot is a bruiser at 6-10 and 240 pounds. Bacot averages a double-double with 16.5 points and 12.5 rebounds per game. Marquette will need to at the very least not get manhandled on the glass. Bacot is a tough cover for the Golden Eagles as Kur Kuath and Oso Ighodaro both are slender and can be pushed around.

Someone step up offensively 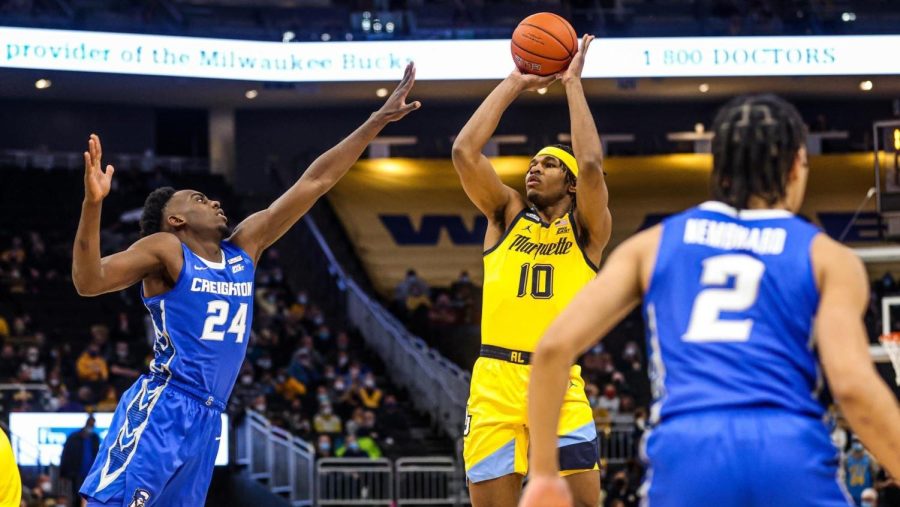 Justin Lewis averages over 17 points per game and Darryl Morsell averages 13.5 points per game. MU likely needs big nights from them and another player to step up and perform to pull out a win. Kam Jones has at times caught fire and rained 3s off the bench. It could be a high-scoring run-and-gun game. Jones connecting from 3 could prove to be a big difference in this game.

The Tar Heels have won eight of their last 10 games while Marquette has lost five of its last eight. I think the rebounding factor is too much and North Carolina edges Marquette. Bacot and North Carolina should be able to muscle MU on the glass. Score Prediction: UNC 80, Marquette 73,

Follow me on Twitter @MSkurzewski  and follow us @WiSportsHeroics! To read more of our articles and keep up to date on the latest in Wisconsin sports!