Milwaukee Trounces Indiana, Collects Back to Back Wins It is always a treat when the Bucks are on national television! In the first game of ESPN’s doubleheader, Milwaukee takes care of business.  Facing off against former Buck Malcolm Brogdon and budding star Domantas Sabonis, Milwaukee trounced Indiana, 130-110.

Looking at the First Half

The Bucks jumped out to a lead early, without Khris Middleton getting too many touches. As the quarter wore on, the lead stretched to as many 11. All five starters got into the scoring column with a very well-balanced attack to start things off. Giannis was Giannis, moving well off the ball and taking advantage of mismatches down low. The Bucks also shot 42% from deep to start. Additionally, the Bucks collected eight assists on 11 made field goals. All was well after one quarter in the Forum.

The second quarter started off with each team trading baskets. Milwaukee’s second unit kept good pace with Indiana, no pun intended. Bryn Forbes looked strong in a backup point guard role, scoring 11 in the first half. Indiana called a timeout when the lead extended to 14 four minutes into the frame.

Even though it is cliche to say a team looks good when they have numbers in transition, that is the case for the Bucks. Back-to-back transition buckets were key in forcing the timeout. When these deer are running, look out.

Not much changed after the timeout besides the Bucks increasing the lead to 22 with 5:25 remaining. The Pacers were able to cut the lead to 17 going into the break. The NBA’s second-best scoring offense put up 68 points on 46% shooting and 12-26 from distance in the first half.

Antetokounmpo stuffed the stat sheet like a Thanksgiving turkey, collecting 14 points, 10 rebounds and 7 assists, shooting 5-5 from the floor. 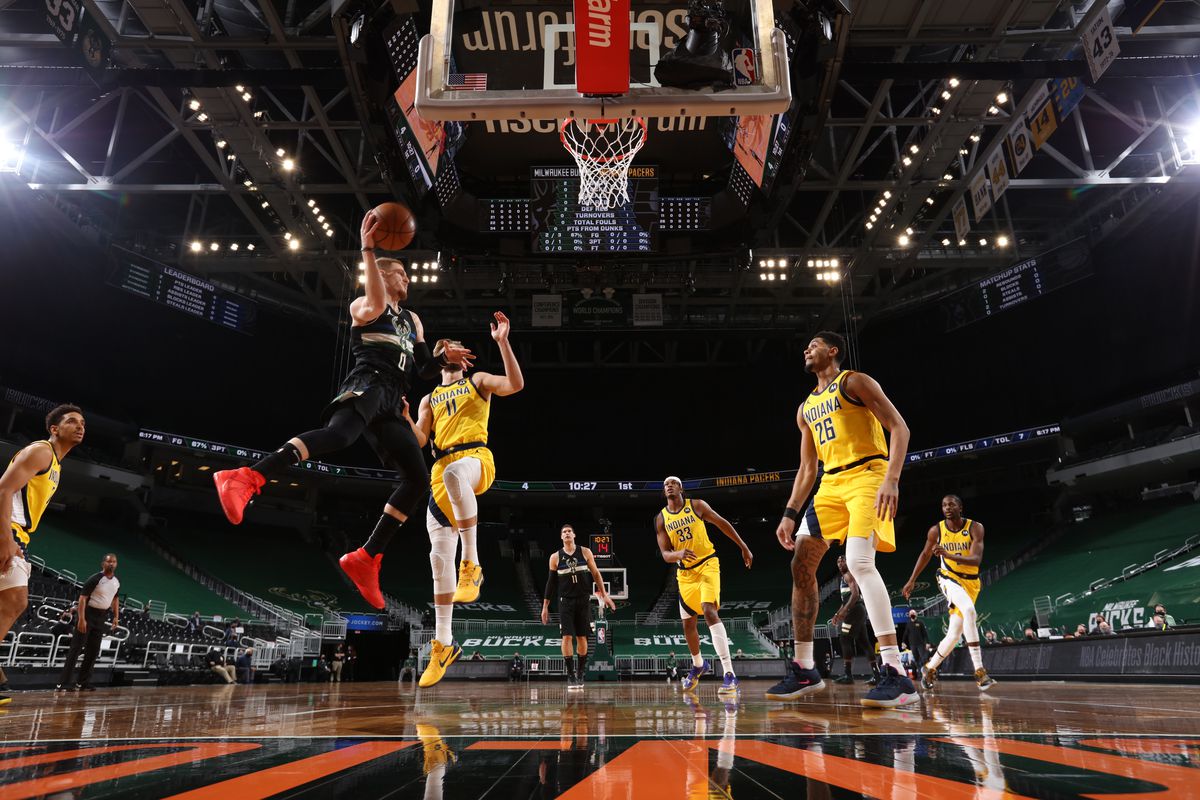 Looking at the Second Half

Donte DiVincenzo came out hot to start the third, hitting back-to-back shots to keep the lead large. The Pacers went on a mini-run, but the Bucks negated it with a quick 4-0 spurt with seven minutes to go. Throughout the course of this game, Milwaukee did a great job at responding to runs and matching buckets.. A 12-0 run stretched the lead to 27 towards the end of the third. The Bucks reached 15 three’s with a quarter and a half to go. Dangerous? You bet. They also reached 100 with 1:30 to go. Dangerous? Yes, indeed. Bobby Portis hit back-to-back triples to end the 3rd, as the Bucks led by 34 to end the frame.

The fourth quarter did not include much breath-taking action, just Milwaukee continuing the onslaught. The lead reached 40 (!) early in the quarter, and it did not shrink all too much. The starters got to relax and see the fruits of their labor. An unbelievable offensive performance for the Bucks, as they move to 13-8 on the season. Milwaukee takes care of business to collect back-to-back wins.