MILWAUKEE, WISCONSIN - MAY 20: Lane Thomas #28 of the Washington Nationals is tagged out attempting an inside the park home run in the seventh inning against the Milwaukee Brewers at American Family Field on May 20, 2022 in Milwaukee, Wisconsin. (Photo by John Fisher/Getty Images)
Share
Facebook Twitter LinkedIn Pinterest Email

Over the past two weeks, the Brewers concluded a ten day road trip through the National League East. They then undertook seven day homestand against the same division. It produced mixed results, but ultimately a winning record and the best 40-game start to a season in team history. With legendary comebacks, dominant pitching performances, and timely hitting from rising stars, the past two weeks showed what this team is capable of. Now to take a look at the games themselves and what we learned from them.

A five run fifth inning did in Brandon Woodruff and the Brewers, specifically a 3-run homer by Brandon Drury and the Reds got their sixth win of the season. Luis Castillo was fairly shaky as well but Cincinnati limited the Brewers offense enough to start a wild series with a win.

Freddy Peralta continued his bounce back May with a fine performance striking out 8 in 5 2/3 innings to get his second win of the year. Devin Williams, though, struggled mightily as he couldn’t find the plate with three walks and three runs allowed in 2/3 of an inning. Luis Perdomo came in to put out the fire and Josh Hader continued his historically dominant start to the season with another scoreless inning for the save. The offense was balanced with the bottom third of the order (Jace Peterson, Lorenzo Cain, Victor Caratini) going 6-11 with three runs scored.

In what might be the wildest game of the year across MLB the Brewers and Reds saw 13 runs come across in just the final two innings. The Brewers did all they could to try and erase a nine run deficit in the ninth before falling just short. The teams combined for 25 runs and 29 hits, so pitching was not worth mentioning much but the offense was. Christian Yelich had 4 hits (including a cycle) and 3 RBI. Mike Brosseau hit a two run homer, Hunter Renfroe went deep twice, and Jace Peterson went yard as well. It was an absurd offensive explosion, especially in the ninth, but in the end it was a game and series loss to the Reds. 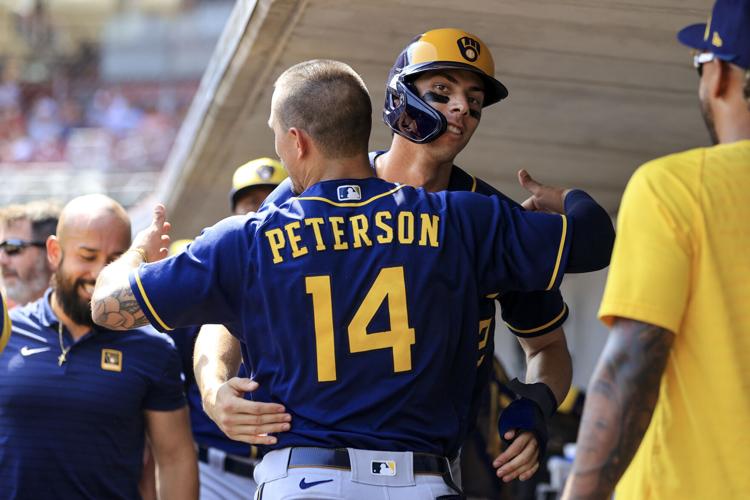 After a day off, the Brewers went to Florida to take on the Marlins. After channeling their inner Florida Man with their offensive emergence in Cincinnati, things calmed down in Miami. It was a bases loaded walk in the ninth inning from on-base Jace Peterson that was the difference. However, all the offense has some connection to Milwaukee. Kolten Wong hit a leadoff home run and old friend Jesus Aguilar returned the favor in the third. Corbin Burnes and Pablo Lopez went pitch for pitch otherwise with each going seven innings and striking out a combined 18 hitters. Devin Williams bounced back well to get the win and Hader again got the save.

For the first time in 2022 Eric Lauer looked mortal, going only five innings and allowing three home runs. Trevor Gott also struggled in his appearance, failing to get an out and allowing four runs (two earned). Offensively, Renfroe had a couple hits and two runs batted in and along with Willy Adames took the Marlins out of the ballpark.

Wrapping up the road trip, Brandon Woodruff threw five solid innings before the real story of the game took over. Aaron Ashby was perfect through the final four innings, striking out eight Marlins to get a save. Offensively, Peterson, Wong, and Rowdy Tellez all went deep and the Brewers stole three bases on old friend Payton Henry. On the downside, Willy Adames was lost with a high ankle sprain and forced Luis Urías to take over as the everyday shortstop for the time being.

The Brewers trio of Freddy Peralta, Devin Williams, and Josh Hader combined to throw the best game since the no-hitter in Cleveland last year. Peralta allowed two hits in seven innings with ten strikeouts. Williams and Hader then struck out the final six in order to wrap it up. And they had to be dominant as the offense didn’t do much against Ian Anderson and the Braves, mustering only five hits. The only run of the game was scored on a wild pitch with Renfroe scampering home in the sixth. 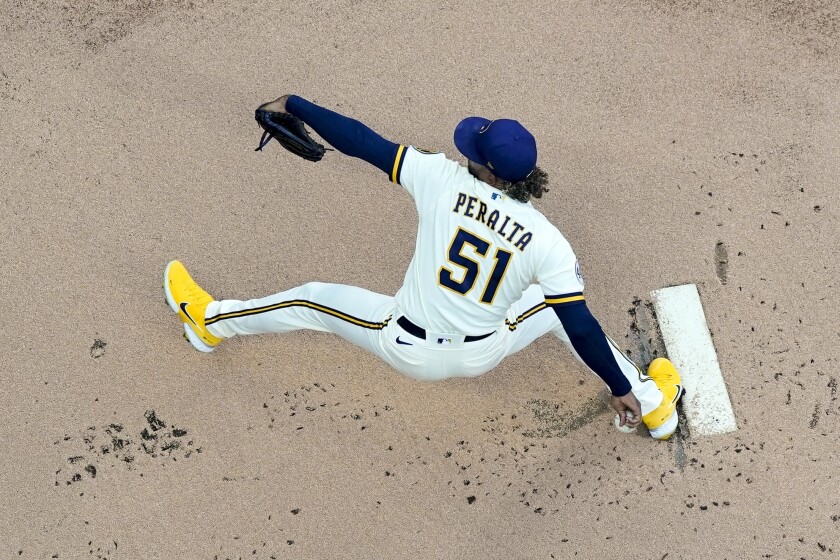 After pitching a shutout the night before, the Brewers got blanked in the second game of the series by a collection of Atlanta pitchers. Adrian Houser took a hard luck loss after allowing just a single unearned run in six innings of work. The Brewers hitters were only able to collect five hits off the Braves’ staff, all singles. Renfroe again led the way with two of them.

After combining for four total runs in the first 18 innings of baseball it took eleven more to close out the series. Atlanta jumped out early off Corbin Burnes with four in the third inning including two homers. However, the Brewers showed their trademark resolve and ability to come back against elite relievers. Kenley Jansen was the unfortunate hurler this time. Kolten Wong laced a triple into the right field corner in the bottom of the ninth to send this one to extras. The teams then traded runs in the tenth. After the Braves got a run in the top of the eleventh, it was time for Keston Hiura to walk it off. Fresh off a stint in Nashville, he hit one off the scoreboard in center to win it and take the series. Without a doubt, the relief on his face was the biggest moment of the past two weeks for the Brewers. Kudos also go out to Trevor Kelley who picked up his first major league win.

Eric Lauer bounced back from his lackluster the week previous with seven shutout innings against an overmatched Washington team and a five run eighth locked up his fourth win. Tellez and Tyrone Taylor went deep for the Brewers with Renfroe going 3-3 and driving in two runs of his own. Williams and Ashby locked it up in the final two innings for a relatively easy win. 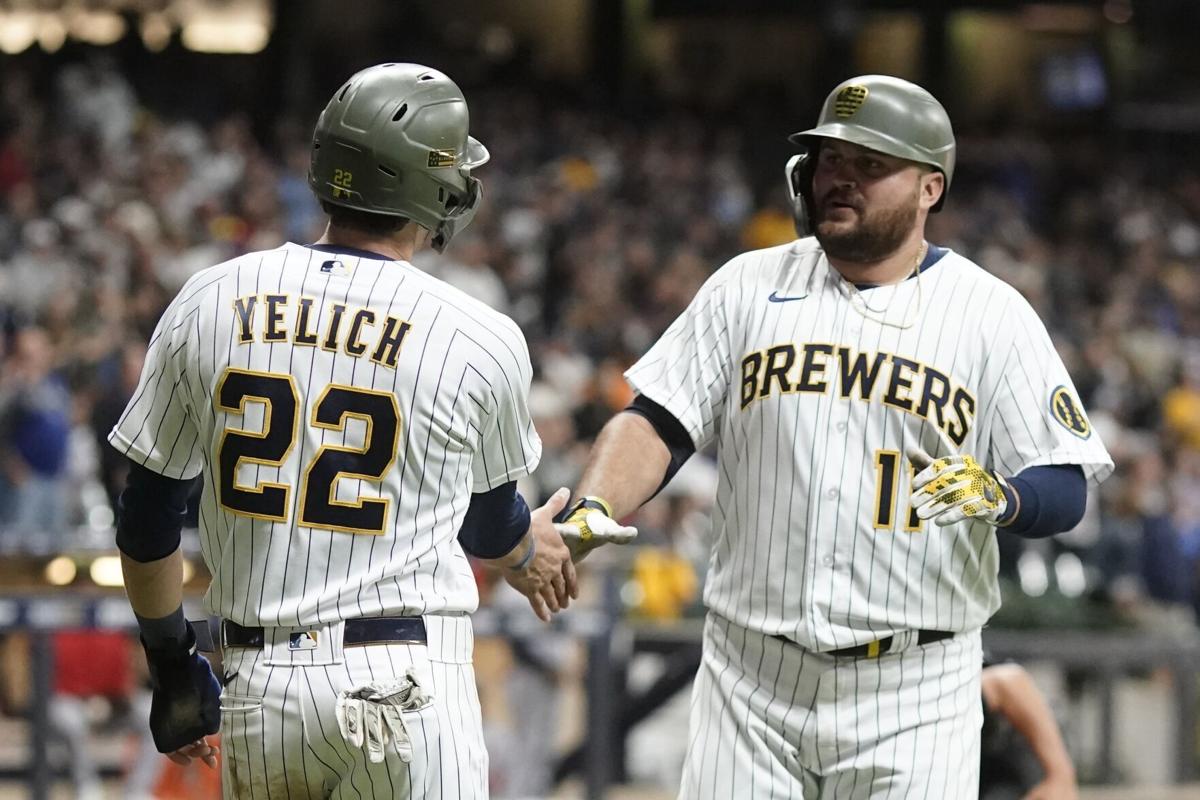 Andrew McCutchen got things started right away in the bottom of the first, hitting the first pitch of the game from Patrick Corbin out to right field and the Brewers were off and running. Two runs in the first and three in the fifth were all that Brandon Woodruff needed to get his fifth win of the season. Luis Urías (more on him below) also homered and continued his emergence into a legitimate star for the team.

The week ended with a concerning thud as Washington hit Freddy Peralta and Brent Suter hard to score eight runs in the first five innings and cruised to a win to avoid the sweep. Even worse, Peralta left the game in the fourth with shoulder tightness and is going to go on the injured list. Outside of Tyrone Taylor’s home run, there isn’t much to say about this game.

TAKEAWAYS FROM THE WEEK(S) THAT WERE

It’s no secret that the Brewers are built on their pitching staff and their defense. In the outfield that hasn’t been a problem with Lorenzo Cain and Tyrone Taylor consistently flashing the leather in center and Hunter Renfroe throwing everyone out in right. However, the infield has been a lot more shaky. Kolten Wong has committed more errors already in 2022 than he did in 2020 and 2021 combined. Mike Brosseau has really struggled with the glove, especially at short. Rowdy Tellez and Hiura are passable with the glove but will never be confused for Don Mattingly at first. Surprisingly the most consistent infielder defensively has been Luis Urías. “Wicho” has been really good at both third base and at short with Adames on the IL.

The Brewers Won the Urías/Lauer Trade

Ken Rosenthal, among others, was ready to dunk all over the Brewers after Trent Grisham won a Gold Glove in 2020 for the Padres. But with over two seasons now gone by since the trade between San Diego and Milwaukee it’s clear who won the trade. Hint: it’s not the team that plays in Petco Park. It took a little bit for the two new Brewers to find their footing. Once they did, though, they’ve shown All-Star potential and have been lynchpins for a World Series Contender. Eric Lauer has been the second best pitcher on a loaded staff and one of the five best in the National League. Luis Urías has also emerged as a major factor in the lineup, hitting .293 and reaching base in each of the sixteen games he’s played this year. It’s clear that David Stearns struck gold with this deal.

Tyrone Taylor Needs to Be the Everyday Centerfielder

Lorenzo Cain will always be a fan favorite and one of the best definitive outfielders of the past 20 years. But his time has come to cede a starting spot. He is more than capable of being the veteran leader who can be a defensive replacement late in games. Cain is hitting just .185 with three extra bast hits and is just 1-3 in stolen base attempts. Tyrone Taylor hasn’t been a ton better but it finding his hitting stroke as he’s gotten more playing time. In the same amount of at bats, Taylor has only four more hits, but six more extra base hits. He’s also a plus defender and should get at least 70% of the remaining starts in center field.

THE BREWERS WEEK AHEAD: 3 Games in San Diego and 4 Games in St. Louis