The Wisconsin Badgers will take on Oklahoma State in the Guaranteed Rate Bowl this year.  It will be held on December 27th, at 9:15 CT in Phoenix, AZ.  This Wisconsin Badgers team looks much different than it did at the beginning of the season.  In fact, both programs have undergone significant changes in recent weeks.  Wisconsin also has a new head coach in Luke Fickell, who left incoming Big 12 member Cincinnati for one of the most consistent teams in the FBS. The Badgers (6-6, 4-5 Big Ten) are set to face the Cowboys (7-5, 4-5 Big 12).  Kickoff will be inside Chase Field and will air on ESPN.  Today Luke Fickell commented on the Badgers’ starting quarterback for the bowl game.

“Yes, Chase, one of the veterans, an older guy who has been around and knows the offense. He has had some playing time, obviously. He was the backup. So I think it will be a pretty smooth transition for him to step up and play well tomorrow.

“And Myles, just a lot of maturity since day one. He’s been willing to learn and do everything that he can to be ready to play. I thought that he did a great job throughout the bowl prep. And I think, if he were to be the quarterback, he would be ready for it. I think both of them will give us a great chance to win.”

For what it’s worth this is the Badgers’ most recent depth chart that was released on December 19th: 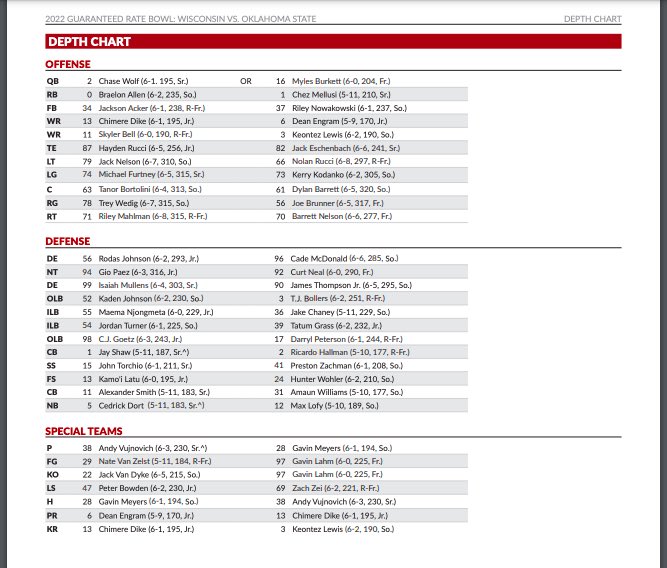 The depth chart lists both QBs with “OR” in between them.  The Wisconsin Badgers would very well use both in the bowl game.  Wolf has been with the program for years and knows the system well.  Burkett is the three star quarterback from Franklin Wisconsin who was a big time commit for the Badgers at the time.  Time will tell how the Badgers navigate this bowl game, but it is clear the coaching staff has confidence in both QBs on the roster.