I am not sure if any player in the Green Bay Packers’ camp is gaining more hype than Rookie wide receiver Romeo Doubs.  He is making a “wow” play on a daily basis at camp.  Aaron Rodgers, Eric Stokes, Randall Cobb, coaching staff, and many beat writers have taken notice.  Now even Jaire Alexander has complimented the rookie wide receiver on how he has been looking. 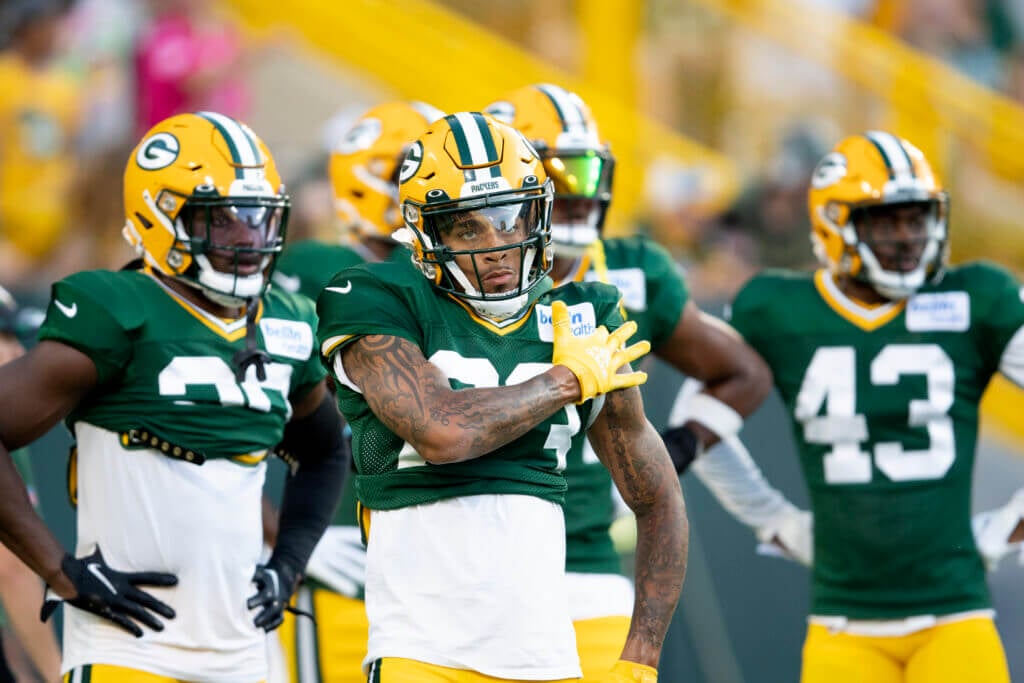 Jaire Alexander has seen Romeo Doubs have his fair share of success against various Packers CBs.  Eric Stokes, Rasul Douglas, Rico Gafford, and Kiondre Thomas were some of the victims of the fourth round draft pick.  Jaire Alexander said “hold my beer” (figure of speech obviously), and decided to take on the rookie phenomenon.  This is how their reps went against each other:

On their first rep, Alexander locked down Doubs on a comeback route after Doubs tried to fool him with a stutter-step and make it seem like he was running a go route down the left sideline. Alexander broke up the pass, shoved Doubs to the ground with his right hand and screamed, “COME ON, MAN” in his face.

On their second rep, Doubs beat Alexander on a go route down the left sideline before dropping a deep ball.  However, Alexander claims Doubs committed offensive pass interference before getting space on Alexander.

“Right at the line, he hit me in my facemask and that’s what made me mad right there,” Alexander told The Athletic on Wednesday. “But I talked to him the next day, apologized. It was all good. I get it. That’s probably like my biggest pet peeve, honestly, when a receiver gets his hands on my face, man, because they won’t call that. They won’t call that in a game and it’s frustrating.”

Said Doubs: “I was trying to use a different skill set to my advantage and might’ve been OPI — it may have not been — but it’s just competition at the end of the day, man.”

Jaire Alexander then had this to say about Romeo Doubs:

“I think he’s a hard worker. I think he has great hands and we’re going to need him this season.”

That is pretty heavy praise from one of the best CBs in the NFL.  Romeo Doubs continues to impress, however he may have been humbled a little going up against the number one CB on the team.  We will see how Romeo Doubs responds during future practices.