Earlier this this week, Oklahoma transfer quarterback Caleb Williams announced he was going to USC. The Wisconisn Badgers were rumored to be one of the finalists. There was interest between both Williams and Wisconsin. Despite Williams choosing the Trojans, it’s now or never for soon-to-be redshirt junior Graham Mertz.

Not The Start Badger Fans Were Thinking

There is no doubt Graham Mertz coming to Wisconsin was a big deal. He was a four star quarterback from Kansas, offered by most of the top schools in the country, and put on a show in his high school years. Choosing the Badgers was a great for the program. As a result, Badger fans had their best named quarterback coming to Madison since Russell Wilson.

In his debut against Illinois on October 23, 2020, Mertz threw for five touchdowns while only throwing one incomplete pass. He received the start after former starter Jack Coan broke his foot. Fans were calling for Graham before the injury and they got their wish. It has been no looking back since.

However, since the Illinois start, it has not been a good start for Mertz. He has had some injuries including a concussion as well as a COVID 19 diagnosis. That happens and he shouldn’t be criticized for that. However, in his Badger career, he has a 59.5% completion percentage, 19 touchdowns, and 16 interceptions. Out of those 16 interceptions, six game in two games last season against Penn State and Notre Dame, arguably his two most important starts. It’s fair to say Mertz has not stepped up in the big moments to this point.

The Potential And Flashes Are There

I don’t want fans to think I’m not a fan of Graham Mertz. In fact, I’ve been one of his biggest supporters and have told Badger fans to be patient, especially after the 2020 season. The talent is there and we have seen it multiple times. The opening start against Illinois was a great example. A lot of his passes were to open receivers, but you still have to make the throws especially in your first college start. I also look at this throw to Chimere Dike against Michigan. This throw got the Badgers back in the game. Unfortunately, Mertz would suffer a chest injury and not return after their first drive in the third quarter.

What a catch, Chimere Dike!pic.twitter.com/Hi23SlsofE

It’s easy to give up on a quarterback, but Mertz has the best potential and is most likely the best option for Badgers in 2022. The Badgers also have one of the best defenses and running backs in the country. Because of this, he isn’t always asked to be the hero. 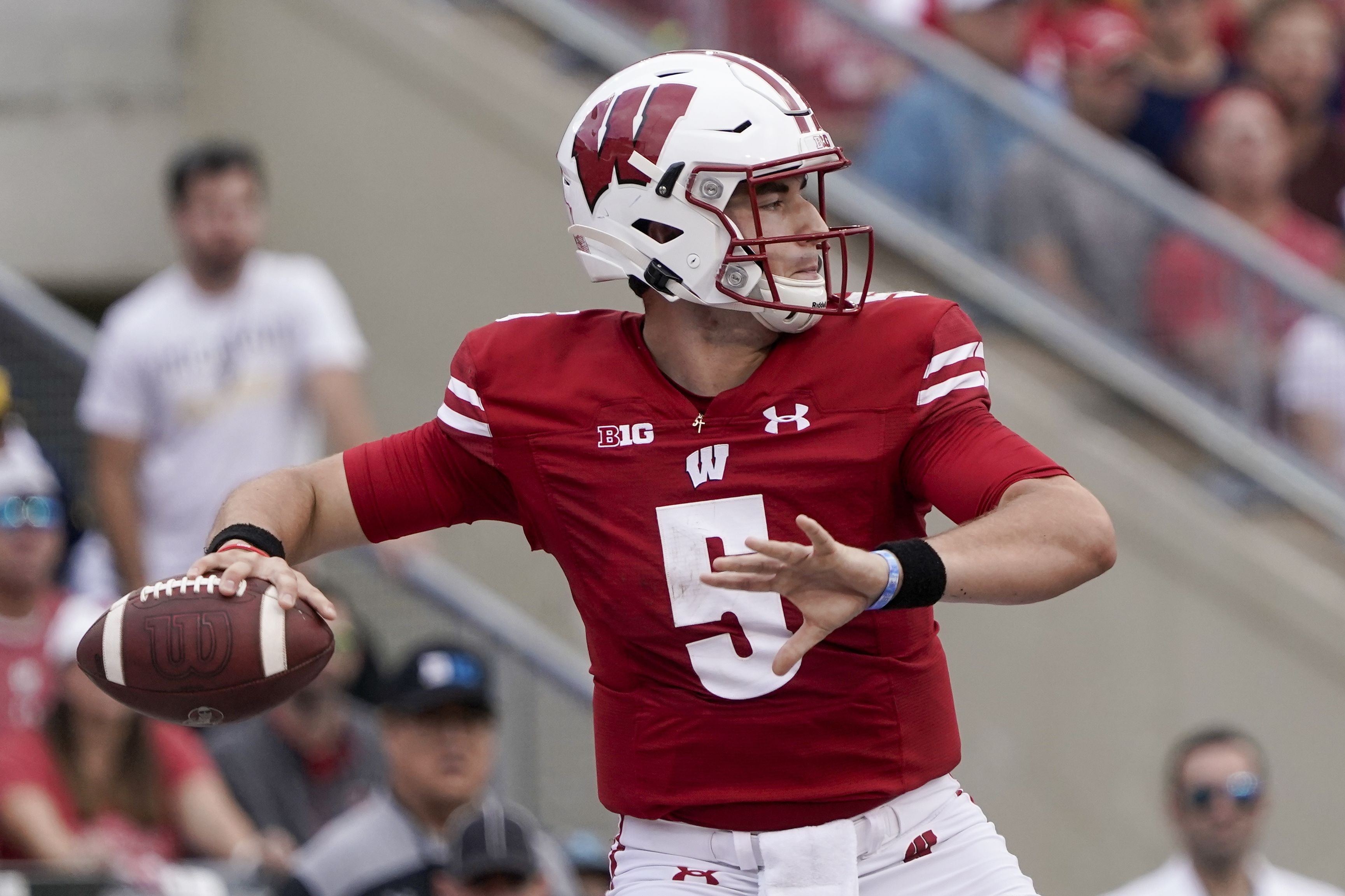 Mertz is a competitive player and won’t let outside noise get into this mind. He loves being competitive and shows it every Saturday on the field. I expect him to come into spring training and fall camp with the swag and confidence he doesn’t lack.

At the same time, this is now or never. Badger students chanting “We Want Caleb”, tweets from a lot of Badger fans wanting Caleb Williams, etc. It’s clear the fan base is getting impatient with Graham Mertz and they feel he is behind on his development. While I don’t disagree, I want to see him with a game on this shoulders. We haven’t seen that yet.

The interest in Caleb Williams from Wisconsin shows me that the Badgers wanted him. If Williams would have chosen the Badgers, there is no doubt he would be the starter and Mertz would go to the bench. Is the confidence from the coaching staff becoming impatient too? Only time will tell. I still think Wisconsin should try to bring in a transfer quarterback to challenge Graham Mertz. Graham is clearly the best quarterback on the roster. Could young players such as Deacon Hill and Myles Burkett challenge him too?

For the redshirt junior, it’s now or never for Graham Mertz. He needs to be good in 2022. Period.