If the Brewers Are to Make the Playoffs, Keston Hiura Needs to Play Every Day If the 2022 Major League Baseball season were to end today, the Milwaukee Brewers would be out of the playoffs. Despite defeating the Chicago Cubs 5-2 on Sunday afternoon, the Brewers are 7-12 in their last 19 games. They are now five games behind the St. Louis Cardinals in the NL Central, and a game and a half out of the third and final Wild Card spot. Truly, the Brewers are not trending in the right direction, and have not been since Josh Hader was traded to the San Diego Padres. While the starting pitching has been solid, the offense has been inconsistent at best. One of the ways the offense can become more productive is for Keston Hiura to be given at bats every day.

How is Keston Hiura not an everyday player at this point

No Current Brewers Hitter Has an OPS Higher than Keston Hiura 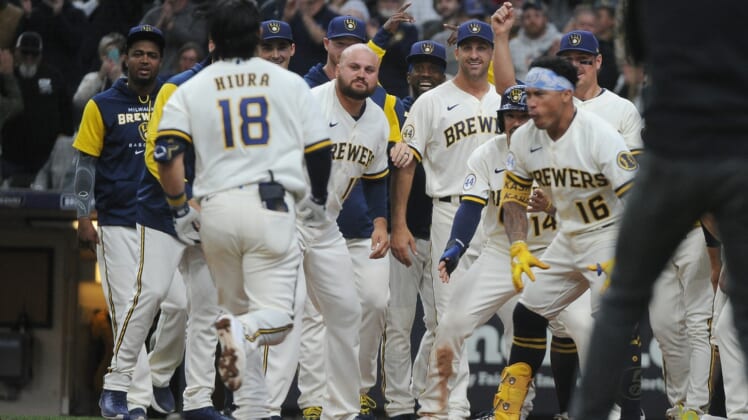 Due to his lack of playing time, in addition to his stints with the Nashville Sounds, this year, Keston Hiura does not statistically qualify to be considered the team’s leader in OPS. The Brewers’ leaderboard in this statistic are as follows:

One may be shocked to see that most qualifying Brewers batters have an OPS above the league average. In fact, the Brewers are seventh in the NL in OPS. They also rank second in home runs (167) and seventh in on base percentage (.316).

How would Keston Hiura improve these numbers? Well, as mentioned, the batters listed above are the only ones with enough at bats to qualify. If we were to take a look at all players who have received at least one plate appearance this season, Hiura would lead the Milwaukee Brewers with a .856 OPS. In addition, Hiura’s OBP of .349 would be second on the team, only behind Christian Yelich (.357).

Aside from these stats, Hiura is hitting home runs at a very impressive rate. In 146 at bats, he has 12 home runs. This is approximately one home run in every 12.6 at bats. If Hiura were to be given 500 at bats in a season, that would translate to 42 home runs.

Keston Hiura saw how the Cubs were attacking him with a lefty starter. So when they specifically went with a southpaw to attack him out of the bullpen, he knew what to expect and made them pay. pic.twitter.com/zkVrwxvYJI

Keston Hiura needs to play more, especially against RHP… has an OPS over 1.000 this year against righties. Does he strike out for too often, of course, but the man has pop and deserves the play time

So, aside from the bad splits against lefties, why doesn’t Hiura get more playing time? A few days ago, Adam McCalvy tweeted this exchange with manager Craig Counsell:

From the "an attempt was made" department, here are Craig Counsell's answers to questions about why at-bats have been limited for Keston Hiura in spite of a .296/.405/.662 slash line in 84 big league plate appearances against right-handed pitching this season. pic.twitter.com/dWCVsVePG5

Counsell seemed very evasive, but it sounds like Hiura’s defensive limitations are what have hurt his playing time this year. For many, however, this is not good enough. Andrew McCutchen and Christian Yelich, who have spent many games at DH, can play most days in the outfield, allowing Hiura to DH. Additionally, Hiura can play left field and first base. He could even play second base if they wanted to give Kolten Wong a day off.

With four different positions he can possibly play, there really is no reason to keep Hiura out. The Brewers are running out of time. Keston Hiura was once regarded as one of their brightest future stars. The future is here. It’s time to ride or die with his bat.