Over the course of the past few seasons, former Green Bay Packers wide receiver Davante Adams was one of the highest scoring fantasy football players. Due to the immense amount of targets, particularly in the red zone, that Adams received, he has been a consistent top-10 pick in many fantasy football drafts. Now Adams plays for the Las Vegas Raiders.  As a result, there is a large hole of targets that needs to be filled in Green Bay. According to Yardbarker, Christian Watson, the Packers’ second round draft pick, is a name to keep an eye on.

Green Bay’s wide receiver group took a huge hit in the offseason, losing Davante Adams and Marquez Valdes-Scantling. They didn’t do much in free agency to stop the bleeding, but second-round pick Christian Watson could be the answer. He’s impressed the team in offseason minicamp and has the size to be an elite Red Zone threat for Aaron Rodgers. The work Adams saw has to go elsewhere, and Watson could see a big target share.

Related: Matt LaFleur explains what the Green Bay Packers offense will look like without Davante Adams

This prediction is made on some firmly sound expectations. The Packers wanted Watson so badly, they tried to trade up to take him at the end of the first round. The Minnesota Vikings, however, did not pull the trigger on that trade. They did not want Green Bay to be able to use a fifth year option on whoever they chose. Regardless of what round in which he was drafted, Watson is among the favorites to win Offensive Rookie of the Year. 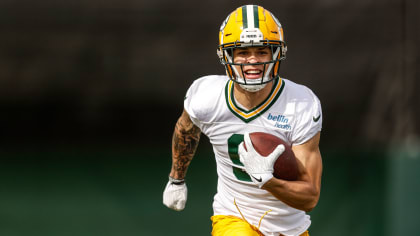 In addition to Christian Watson, the Green Bay Packers have his fellow rookie wide receivers, Romeo Doubs and Samori Toure, in the wide receiver room. They are joined by fellow Packers-newcomer Sammy Watkins, who signed a one-year deal with Green Bay earlier this offseason. Additionally, the Packers have Allen Lazard, Randall Cobb, and Amari Rodgers all returning from last season.

To be certain, the offense will be very different this upcoming season. Davante Adams is in a league of his own as a receiver. No one player is going to be able to replace him. However, with as much talent as Christian Watson has, it is a good bet that he will get plenty of targets. This makes him an ideal sleeper pick in fantasy football leagues.