The Milwaukee Bucks were 8-9 on the road entering tonight’s game against the Washington Wizards.  They come out 9-9 after a wild 125-119 nail-biter and a MVP performance from Giannis Antetokounmpo.  The Wizards, without All-Star Bradley Beal, nearly pulled off the upset behind the play of former MVP Russell Westbrook.  In the end, though, the Bucks’ offensive rebounding, timely defense, and clutch free throws ended up being the difference in the game. 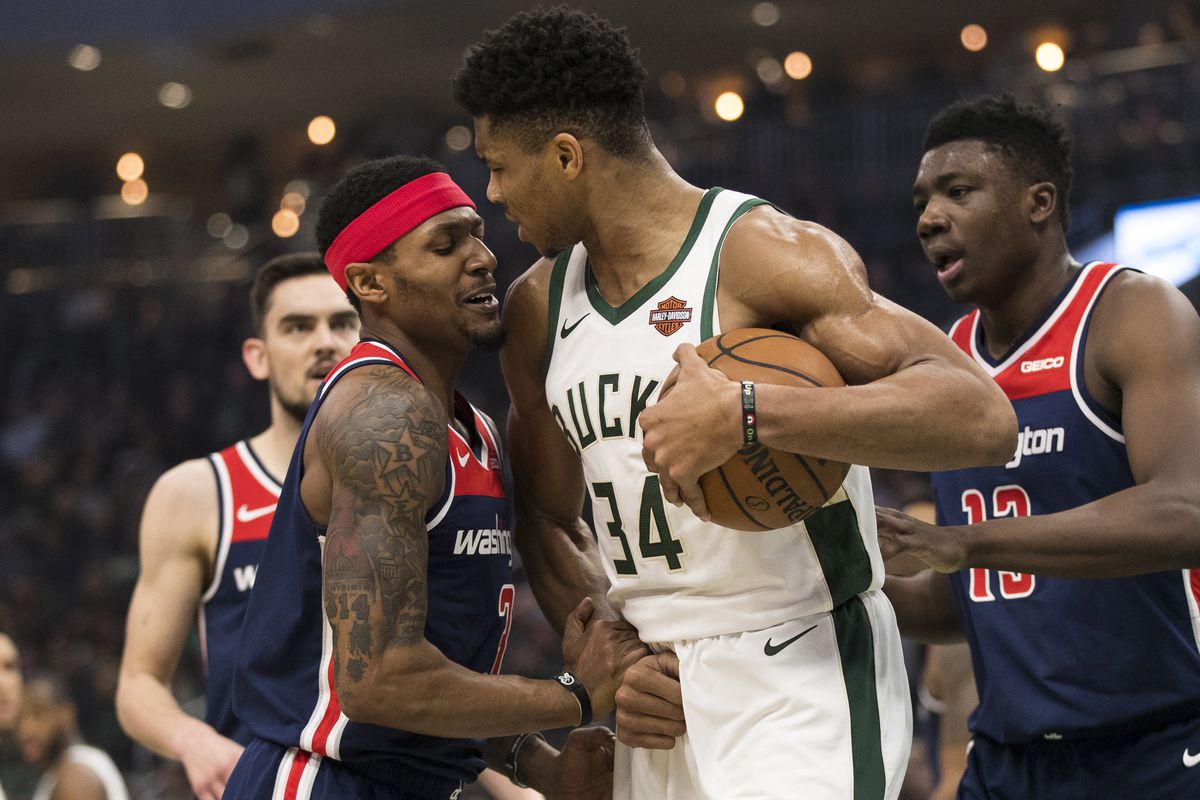 The Bucks were led by Giannis Antetokounmpo, who continued his red-hot shooting after going 16/16 from the field in the All-Star Game last weekend.  Giannis had 33 points, 11 rebounds, and 11 assists on 12/19 shooting.  The Greek Freak was 2/4 from behind the arc and 7/8 from the free throw line.  After struggling from the free throw line during the first few months of the season, Giannis is shooting 75% from the line since February 1.

Also earlier in the season, Giannis appeared to struggle as he adjusted to a new role in the offense.  He appears to have figured it out, though, and he is starting to put up near triple-double numbers in every game.  Even before he found his groove, Giannis was putting up MVP-caliber numbers.  Now, however, he is making it look easy, just as he did during his last two MVP seasons.

Giannis is having the best season of all-time for a guy no one is giving any real MVP consideration.

Timely Defense At the End

For much of the game, the Bucks and Wizards were going shot for shot.  After the first quarter, the Bucks were up three after a buzzer-beating three pointer from Bobby Portis.  The Bucks trailed by one at halftime and at the end of the third quarter.  Milwaukee took a three-point lead before Westbrook tied the game with a three with 41 seconds left to play.  The Bucks, though, were able to get defensive stops in the final minutes, and hit clutch free throws to put the game away.

"When it came down to it, we got the stops we needed. It’s great to get defensive stops at the end.” pic.twitter.com/KVwlMm82e8

The Milwaukee Bucks had eight players score in double figures on this night, led by Giannis’ 33.  Jrue Holiday had 18, Khris Middleton added 16, Portis 14, Brook Lopez and Pat Connaughton 11 each, and Donte DiVincenzo and Bryn Forbes had 10 a piece.  DiVincenzo had a double-double, adding 13 rebounds as well.

The Washington Wizards were led by Russell Westbrook who had 42 points, 10 rebounds, and 12 assists.  Power forward Rui Hachimura added 29 points and 10 rebounds in the losing effort.

Win the Boards, Win the Game

The Milwaukee Bucks improved to 2-10 in games in which their opponents have a better shooting percentage than them during the game.  A large part of why they won tonight was due to their rebounding.  They out-rebounded Washington 44-35, and pulled down 13 offensive rebounds.

The Bucks and Wizards will play again on Monday night in Washington.