Giannis: “I Don’t Care About Being the Face of the NBA” Giannis Antetokounmpo is, without a doubt, one of the best basketball players in the NBA.  Fresh off of clinching the NBA title with a 50-point performance, many wonder if he is the new face of the NBA.  After all, he has won just about every individual award there is to win.  However, many believe that LeBron James or Kevin Durant are, or should be, the face of the NBA.  Now back in Greece, when asked whether he wanted to be the face of the NBA, Giannis said this:

Giannis Antetokounmpo is back in Greece: "I don't care about being the face of the NBA. KD or Harden can be. I want to be with my kids and my family, i want to win and enjoy the game. I want to be Giannis the hard worker".

Giannis Has Done It All

The fact of the matter is this: anyone would be hard-pressed to find a player with as many accolades as Giannis who is as good of a role model as him.  Giannis is not even 27 years old yet, and he still has won two MVP’s, a Defensive Player of the Year, the All-Star Game MVP, Finals MVP, amongst other All-NBA honors.  In fact, it can be argued that if he retired today, he would already be a first-ballot Hall of Famer.

He Is Not Done

One of the best things about Giannis Antetokounmpo is that he is never satisfied.  That is not to say that he is not happy, but rather that he always finds whatever it is within himself to motivate him to be better.  As mentioned above, he has done it all.  He has nothing left to prove.  However, Giannis is not allowing that fact to make him complacent:

Giannis Antetokounmpo: "I love the playoffs and the pressure. I enjoy pressure, i didn't care about the result. And now what's next? Now i know what it takes, now i want to do it again. It's like challenging myself. I want to please my people even though i have nothing to prove".

The Milwaukee Bucks are certainly primed for what could be a long period of championship level basketball.  After all, Giannis, Khris Middleton, and Jrue Holiday are all locked up for the next several years.  It is easy for many players to feel like once they have won once, they no long need to prove anything.  That will not be an issue for this Bucks’ team.  Giannis is their emotional leader as well as the general on the floor.  With this being Giannis’ attitude towards winning more titles, everyone can be sure that it is the rest of the team’s as well.

What About Being the Face of the NBA? 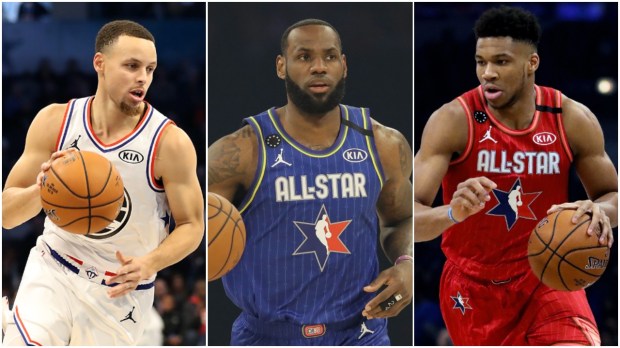 As Giannis stated, let KD or Harden have that.  Giannis is not about achieving glory for himself alone.  If that were the case, he would not have signed the supermax to stay in the small market of Milwaukee, Wisconsin.  Instead, he would be in Los Angeles, New York, or some other large market.

ESPN and the other major media outlets really exposed their true feelings about Milwaukee during the Bucks’ Finals run.  ESPN’s Steven A. Smith went as far as to say it was a “terrible city.”  When Giannis made the decision to stay in Milwaukee, he was heavily criticized for not leaving for brighter lights elsewhere.

What many people outside of Milwaukee do not understand is that the lifestyle Giannis wants.  As he has stated on numerous occasions, he just wants to be himself.  He wants to be a dad.  One of the best stories about this comes from after he signed the supermax.  One reporter asked him how he celebrated inking such a rich deal.  Giannis’ response:

“I went to BuyBuy Baby and bought some new toys for Liam.  Then I went home.”